Greetings, and welcome to the fourth episode of an Out Of Cards exclusive community challenge. This series focuses on creative deck building in Hearthstone Duels and we aim to give the game mode love it deserves.

Roughly every three weeks, we will create a new Duels challenge, consisting in building a starting deck with a certain restriction - be it mana cost, keywords, including certain build-arounds and so on. Every player will be invited to join and build a deck with said restriction: we'll even provide some samples ourselves, so that you won't be forced to go to the blank drawing board.

Those who'll be able to provide worthy results will be awarded with a reward!

Here we are with the last Master Duelist challenge for the United in Stormwind expansion cycle. For this occasion, we think that building around one of the most relevant additions of the Year of the Gryphon is definitely interesting, so November's challenge is Back To School, and it will ask you to build a Spell School-oriented starting deck.

To be more clear, this deck building restriction does not allow you to include spells belonging to two different Spell Schools, while you can add as many School-less spells as you wish.

This challenge will begin today, November 11th, and will end on November 30th. During this window of time, you'll have to start a Duels run with a starting deck including at least 5 spells belonging to just one Spell School.

Everyone who posts proof of a 7+ wins run in the dedicated submission forum thread will be awarded with a different amount of Gold, an on-site currency you'll be able to earn from different activities and that will be used to purchase cosmetics in our on-site shop. Remember that, in order for your run to count towards the challenge, you'll have to provide an appropriate proof of your feat; otherwise, your result won't count.

Here's a quick breakdown explaining the rewards you'll receive based on your performance:

These are the criteria we'll use to determine the winner in case of identical scores:

The winner will be contacted through Direct Messages after the submission time has ended.

If you want to submit your score, follow the instructions in the forum thread.

Duels has a ton of Passive Treasure with direct synergy for most Spells School: while some of them are divided between pool 1 and pool 2, sometimes you can also happen to be able to choose the one you prefer right after the first match!

It would take way too much time to list all of them, so here are a few one you should definitely look for. 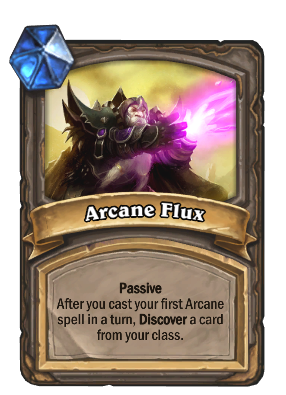 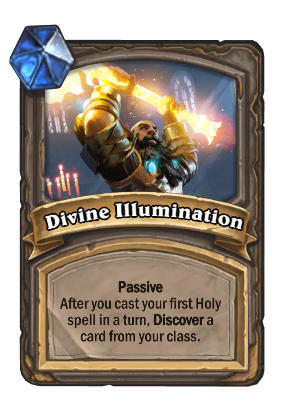 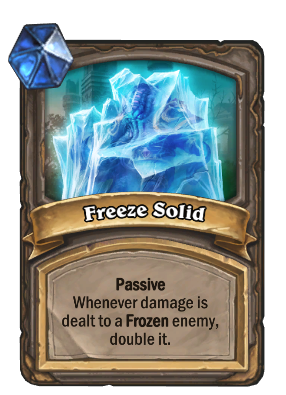 Arcane Flux - Discovering a card each turn can give you quite the edge on your opponent, given that you have the chance to get the answer you might be looking for, or just even more Arcane spells!

Freeze Solid - One of the recently buffed Passive Treasures, Freeze Solid pairs up perfectly with the burst tools Mage has at disposal. 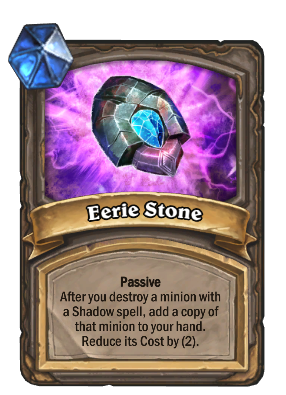 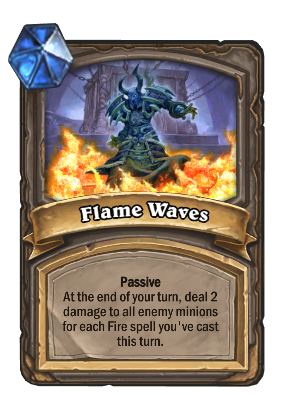 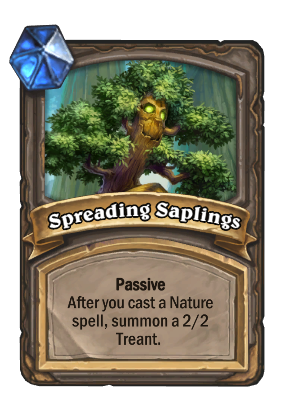 Eerie Stone - Shadow Spells usually deal damage and destroy minions, so having a discounted hand refill with good units to turn against your opponent is going to be relevant down the road.

Flame Waves - There aren't many Fire spells in the Duels pool, but oh boy is this a good Passive. With the right deck (and hand), we dare to say that Flame Waves is hands down the best Passive Treasure in the game.

Spreading Saplings - You are not guaranteed to summon a 2/2 each turn like Party Replacement does, but you can summon more than one in a single turn.

Some Active Treasures have a Spell School too, and you can think about picking them in order to increase your deck's overall synergy. 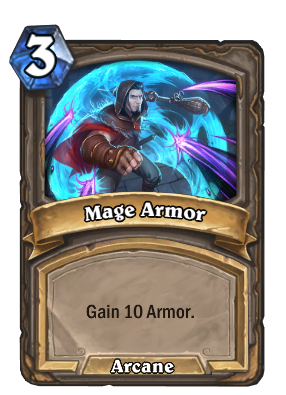 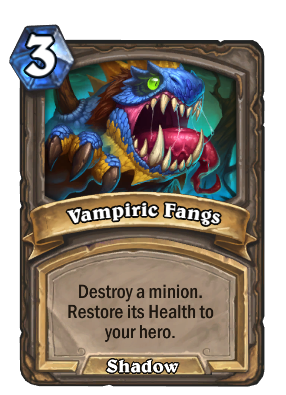 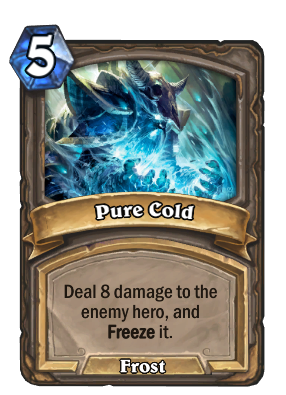 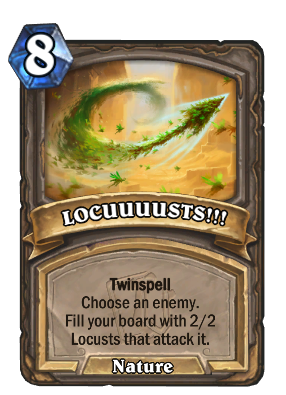 Mage Armor - 10 health gain for just 3 mana in a rather aggressive game mode and Arcane synergy? Even if you decide to build around another Spell School, this Treasure is definitely worth your attention.

Vampiric Fangs - Same reasoning behind Mage Armor, with the difference that we're talking about a Shadow spell that gives you less healing (on average) but removes a threat from the board. Works wonderfully with Eerie Stone.

Pure Cold - Lesser Pyroblast, but Frost and for half the mana cost. Imagine also having Arctic Armor of Freeze Solid on top of it!

LOCUUUUSTS!!! - Face is the place.

As much as we encourage our participants to put their deck building skills to use, we do not want to cut out those who may want to give this challenge a try, but do not want to build a 15 deck from scratch. Therefore, here are some starting decks you may want to take inspiration from and use them to slice through the competition!

Let's start with one of the United in Stormwind brand new archetypes: Fel Demon Hunter. Although Jace Darkweaver is far away from being a menace to the meta, we still like this Spell School-related approach for a Shudderwock-like effect.

Duels currently has two Passive Treasures that specifically synergize with Fel spells: Wither the Weak and the recently buffed. Corrupted Felstone. Sure, you can always aim for the generally good ones, but, after all, we'd like Maser Duelist to be that place where you can have fun and try new things! 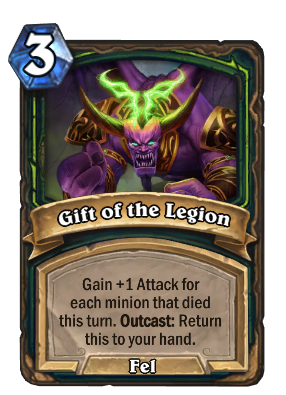 This isn't new and mine neither: it was created by Fliboce a while ago, and they brought it all the way to 12 wins, so you know there's some potential here! Arcane Mage combines Spell Damage and card generation to keep your hand full as you slowly deal chip damage to your opponent or, if you have the chance, burst them down in a single turn.

Arcane Flux is obviously your top priority with this archetype, which is a lot better than the other Arcane Passive, Arcanite Crystal. 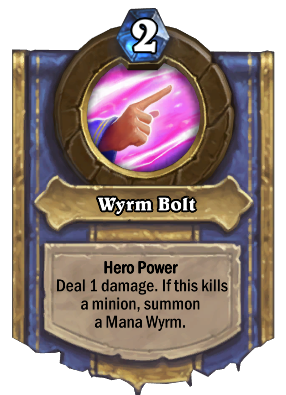 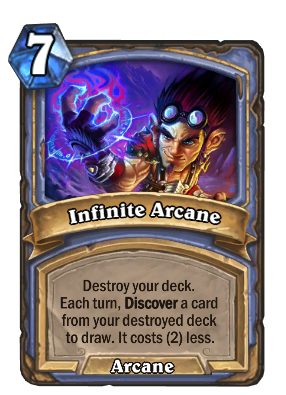 Hit them hard and hit them fast: this is what Weapon Rogue has always wanted to do. It appears that all the Poison buffs are also Nature spells, so here's how this deck has come to life. To be completely fair, we expect Weapon Rogue to be more of a fun meme than a consistent powerhouse, but we're still intrigued by playing a Spell School deck with Infiltrator Lilian.

While Mending Pools and Spreading Saplings overcome your 'solitaire game plan' weaknesses (respectively healing and board presence), you may also want to look for Legendary Loot or mana-cheat effects like Khadgar's Scrying Orb. 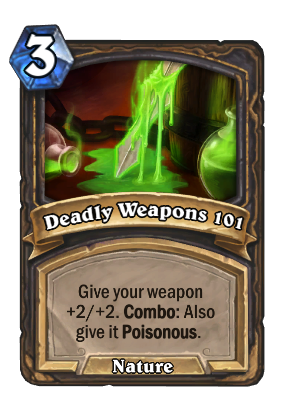 Now that you know everything you need, grab your deck: it's time to D-D-D-D-Duels! Good luck to everyone!