Legends of Runeterra has a LOT of stuff coming up in the next few months and it's going to bring a lot of improvements and content to this game that we love. Here's some of the changes that you can expect. See the full release notes below.

Patch 1.4 arrives next week with balance changes, a new mode, and more—all heralding the start of the Season of Fortune. The usual patch notes are coming next week, but right now we’d like to share an early overview of what you can expect to see over the course of the upcoming season. 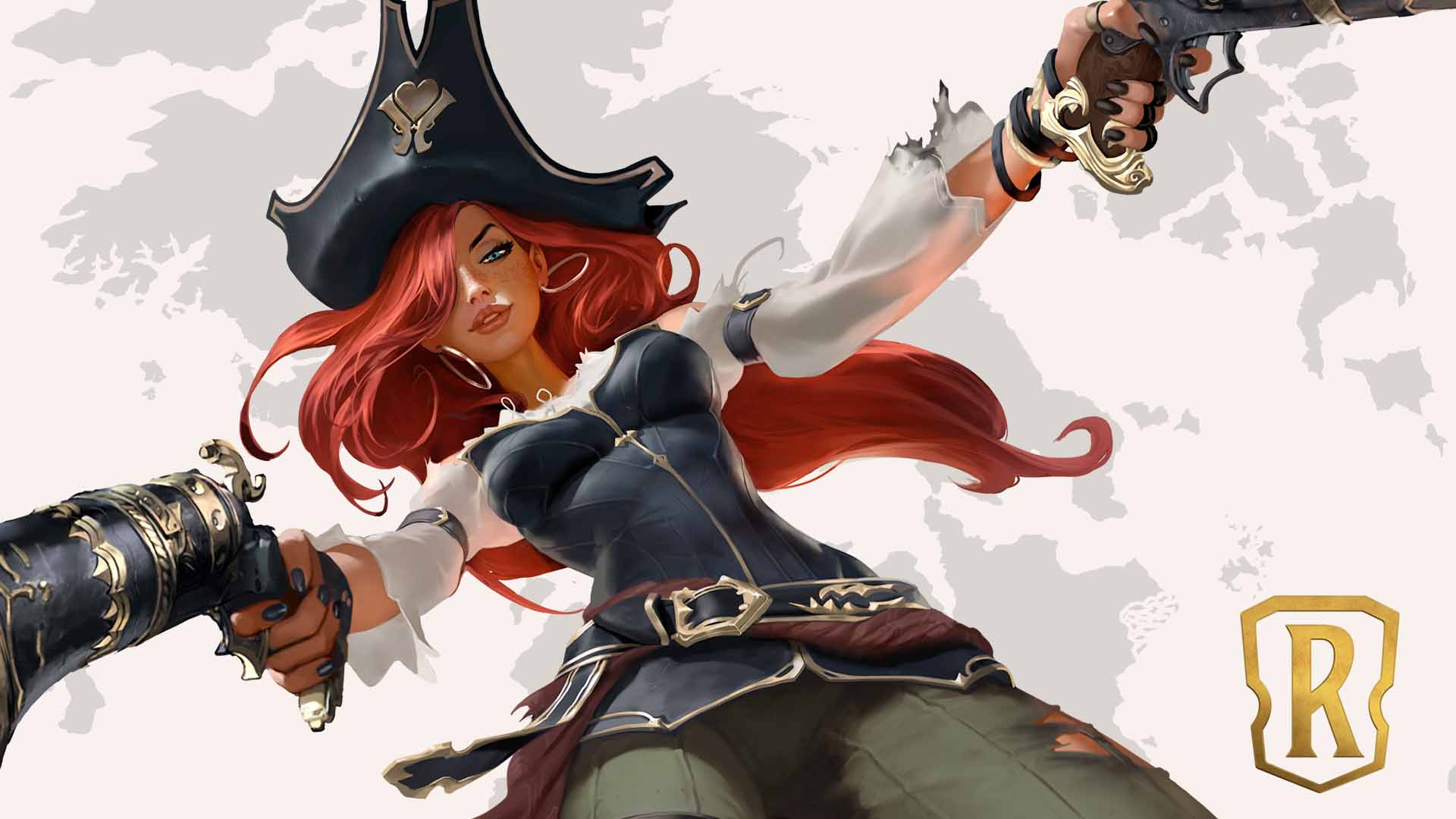 A note on seasons

In the past, we’ve used “season” to refer to the current ranked season (like the Season of Plunder), while structuring content releases around the two-week patch cadence. Neither of those are going away, but things are about to change a little.

As we covered in our recent “What’s Next for Runeterra” video (definitely check that out if you haven’t yet), there’s a lot of new stuff coming to LoR throughout 2020. One of the biggest changes (beginning in August) is a shift from expansions every four months to card releases happening every two months. Here’s how it works out: 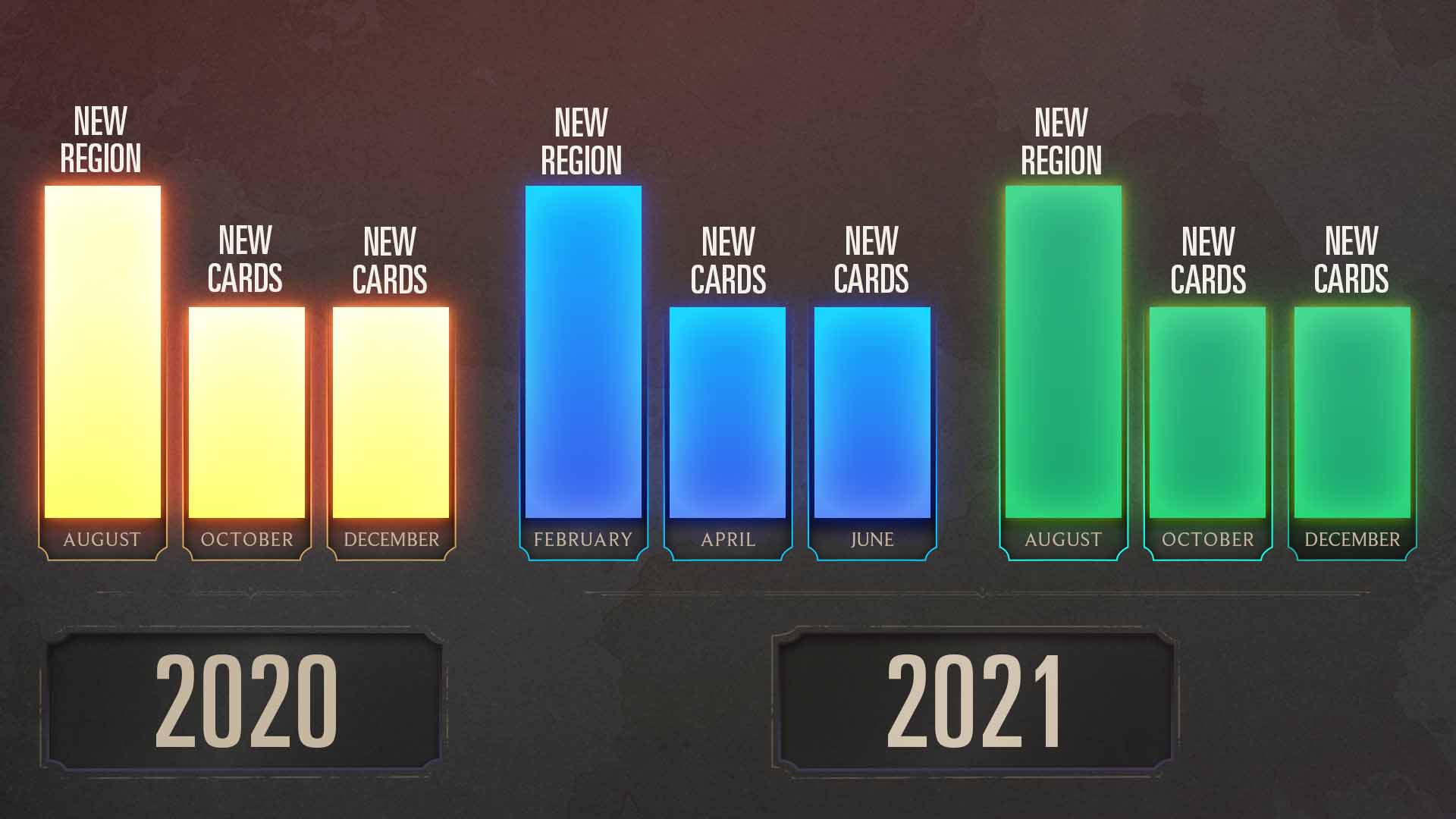 At that point, ranked seasons will also line up with those releases (and share their names), forming a natural rhythm of bimonthly expansion-seasons which introduce new cards, content, and features that change the way you play.

As part of that new rhythm, you can expect periodic previews like this one where we’ll cover some of what the next season has in store. But we’re getting ahead of ourselves—let’s talk about what you can expect to see in the upcoming Season of Fortune.

The Season of Fortune

As JJ & Yip mentioned in the “What’s Next for Runeterra” video, we believe that for a card game to stay engaging for years, we need to bring more than new cards to the table. That means making sure every season in LoR feels different from the last, offering new ways to play, compete, and use your collection.

With new cards and a new region coming at the end of the Season of Fortune, our focus right now is on continuing to build a robust ecosystem of modes & features for you to show off your skill. In particular, we’re looking to make a variety of updates to develop LoR’s competitive ecosystem, including a new competitive game mode called Gauntlets (Patch 1.4), updates to how Masters-tier LP works (Patch 1.4), and the much-requested implementation of cross-shard friend challenge (Patch 1.6).

We’re also bringing you two other ways to challenge your cardslinging skills and get rewarded for the hours you spend playing LoR: Labs (Patch 1.5) and our first in-game Event (Patch 1.6, 1.7).

Overall, we’re excited to introduce a range of new experiences that’ll be fundamental to LoR’s seasonal rhythm going forward. Let's take a look at how the Season of Fortune unfolds over the next four patches.

Patch 1.4: Prove your skill with Gauntlets

Starting off is Patch 1.4 and an all-new game mode: Gauntlets.

Gauntlets are limited-time competitive modes with unique deckbuilding rules. Gauntlets go live every weekend for about four days total, with weekly swaps between formats in the rotation.

The first Gauntlet begins June 26 and will use standard deckbuilding rules as we test-drive the underlying tech; a second type of Gauntlet, Singleton, joins the rotation on July 3, and will challenge you to build a deck using no more than one copy of each card. 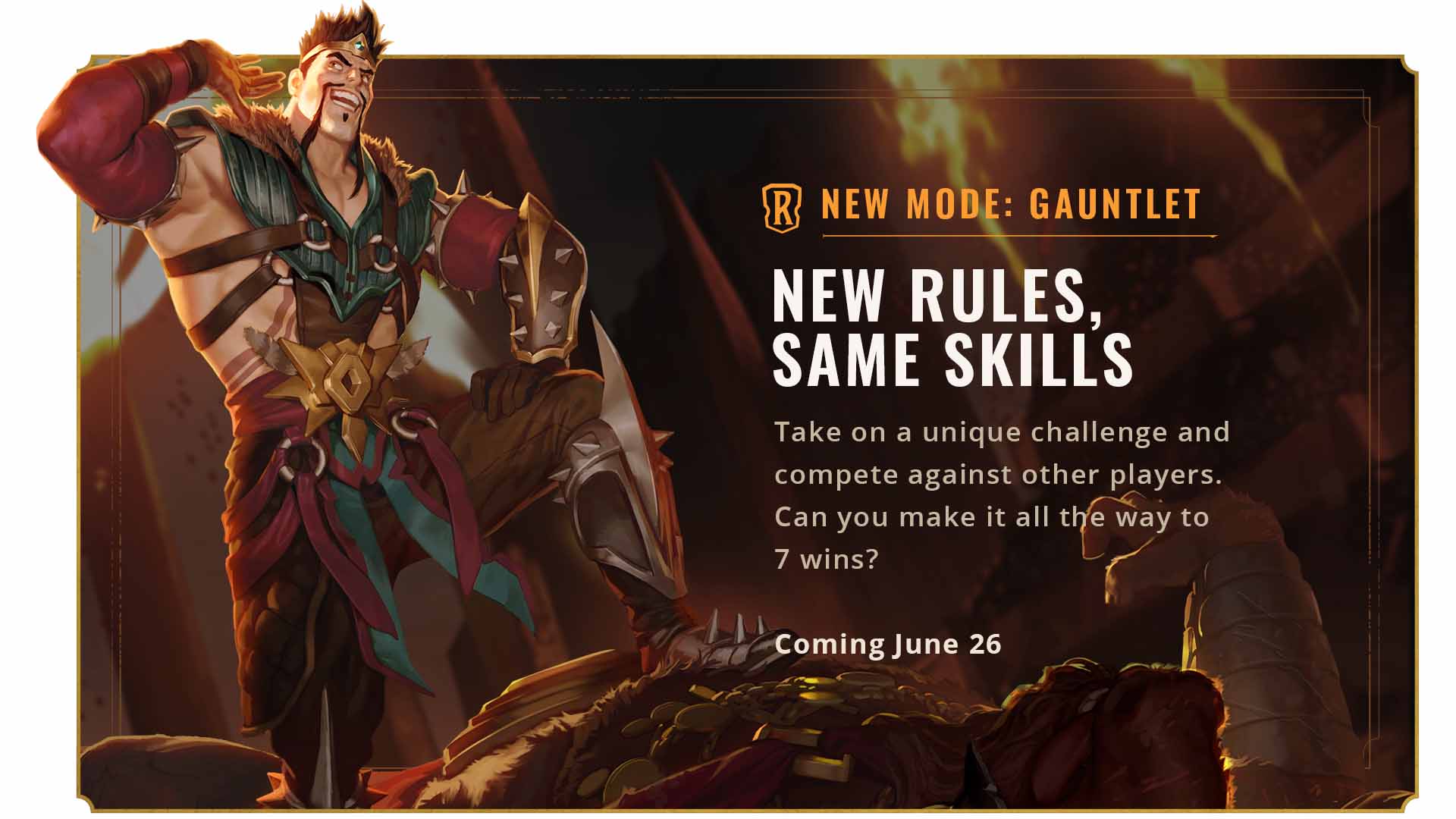 Everyone who takes on a particular Gauntlet format will receive a special icon, but only those who make it to seven wins will earn the exclusive Gauntlet Conqueror icon. In the future, we plan to add more exclusive rewards and improve the Gauntlet mode overall, using the technology to build our way to full-scale in-game tournaments.

While Gauntlets may be the headline, they’re definitely not all Patch 1.4 has to offer. There will be a partial ranked reset (details here) and reward icons for your ranked performance during the Season of Plunder, a bunch of new personalization items in the store, 20+ card balance changes and reworks, and an update to Masters-tier LP.

Let’s talk a little more about that last one. Up until now, Masters tier has been rank-ordered by player MMR, but we’ve realized this has some unfortunate downsides—mainly that it was unclear how much your rank could change in a single game, and losses could feel overly punishing.

Now, instead of displaying your rank order within Masters, you’ll see your current Masters LP, and upon first entering Masters, you’ll get an initial LP amount based on your MMR relative to other players in Masters. From there, your LP gains and losses will be determined by a combination of factors including your MMR, your opponent’s MMR, and how much LP you have compared to other players in Masters. These values can range from 15–25 LP, matching that in Platinum and Diamond, and at the end of the season, Masters players will be reset to Platinum 4, regardless of how much LP you have.

Our hope is that this brings much needed clarity to the ranking process while keeping Masters tier the apex of competitive play in LoR. Let us know how the new system feels, and good luck making it to the top!

Patch 1.5: Adapt to the unexpected with Labs

Landing early in July is Patch 1.5 and the debut of another new way to play: Labs. Where Gauntlets are aimed at the competitive experience, Labs are all about variety, experimentation, and maybe a little chaos.

Every patch after 1.5 will include a new or updated Lab to replace the previous one. Some Labs will experiment with small changes to the classic LoR formula, while others will offer new game modes, or even more extreme takes on cardplay in the world of Runeterra. Each one is a chance for you to join us as we try new things and discover what’s fun, what’s not, and what deserves to be developed further in the future. We’re starting small, but look forward to some bigger, crazier experiments later this year and beyond!

The first Lab, A.R.A.M., is available July 8 with Patch 1.5 and features unexpected champion matchups and unpredictable outcomes. Rather than building a deck, you’ll make choices from a random selection of champions when the game starts. The champions you choose will start in your hand and generate a deck for you to pilot against your opponent’s equally random creation!

Patch 1.6 and 1.7: Expand your collection with LoR’s first event

Toward the end of July, Patch 1.6 will kick off LoR’s first in-game event—a month-long thematic experience featuring a new Lab, special quests, personalization items, and more. We’re keeping the event’s theme under wraps for now, but keep an eye out for a special preview before it officially starts.

We want events to be a great way to get even more rewards for the time you spend playing LoR, and every player will have access to a series of limited-time items that can be unlocked just by playing. There will also be an Event Pass in the store that adds even more rewards to unlock along the way.

Beyond the event, Patch 1.6 will also feature more card updates as well as the implementation of cross-shard friend challenge, a key step toward the long-term vision of a truly global competitive ecosystem (and a great way to flex on friends from around the world).

The event will continue into Patch 1.7 with more quests and store content, as well as a new Lab and a new twist on the Singleton Gauntlet format.

Oh—one other small detail, might not even be worth mentioning, but just in case you’re interested… starting in Patch 1.7, you’ll be able to choose which card art represents each of your decks in the deckbuilder.

From foundation to future

We know we keep beating the drum on the whole “building the foundation” thing, but it’s important to us that you know, that we know, we still have a lot to improve. We want to be honest about where we think things still need to be better—like competitive rewards.

Our long-term goal for honoring competitive accomplishments (Ranked seasons, Gauntlets, etc.) is to create exclusive cosmetic rewards that you really value earning, and can be used collectively over time as you build up a collection based on your different accomplishments. The main rewards we have in mind are various cosmetic card modifications that you can collect and include in your decks. We’re not ready to show anything off yet, but we’ll have more info to share heading into August—along with the next season-expansion.

We’ll be back next Tuesday (June 23) with the Patch 1.4 Notes. Until then, good luck in your final Season of Plunder matches, and we’ll see you in the Season of Fortune! 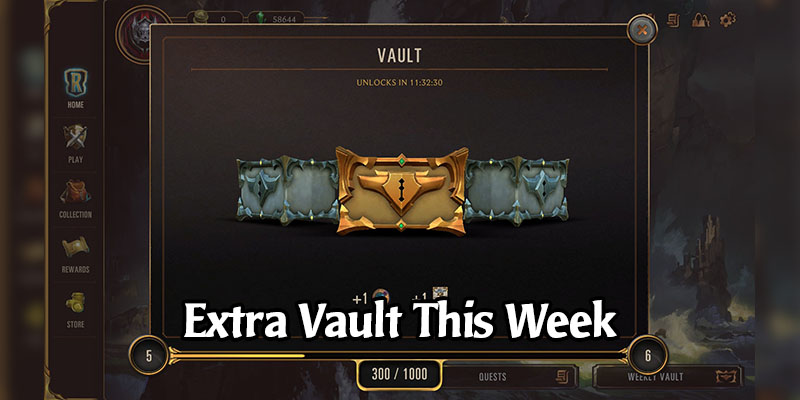 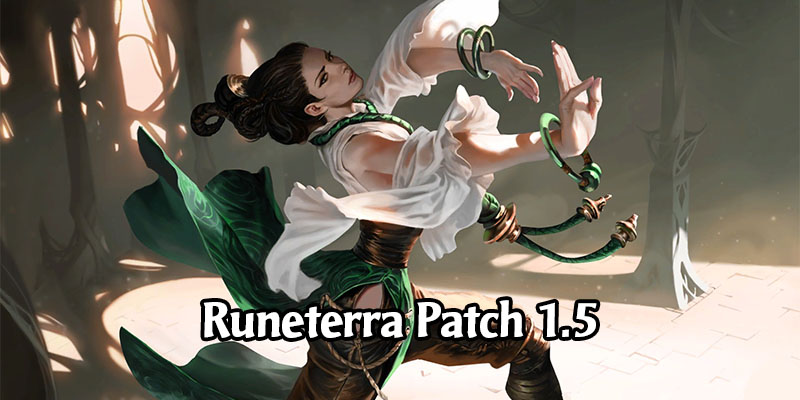 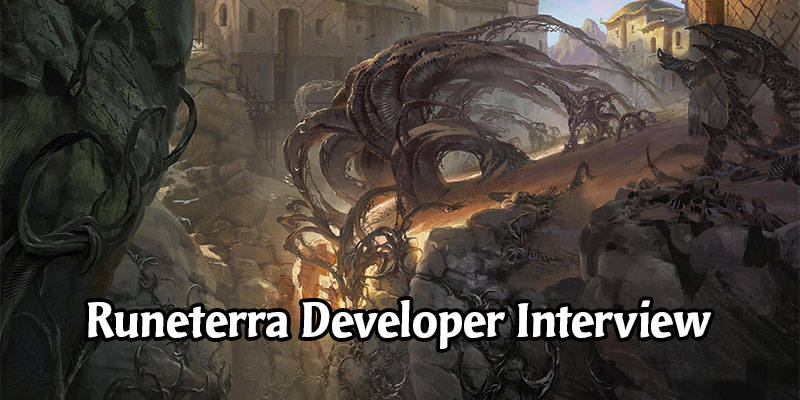