Hail, champions! Or should I say "popstars"? You've probably noticed the new K/DA-themed lab that arrived in Patch 1.13 with premade decks highlighting the new K/DA cards, so we figured it was time for another article! Below you'll find decklists, win conditions, mulligan guides, and some basic strategies. Also, note that in this lab each deck has a unique passive power intended to complement the featured K/DA spell -- we'll cover that as well.

Let's quickly review the 5 decklists before deep-diving the individual decks: 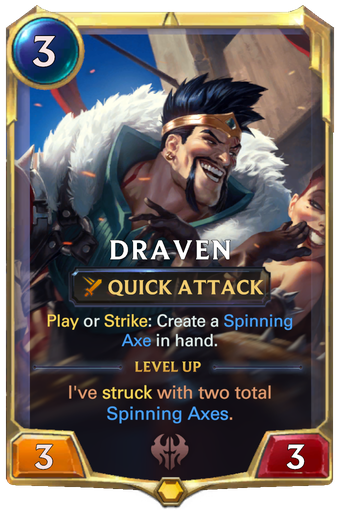 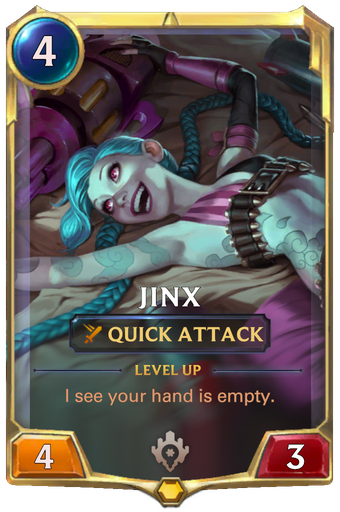 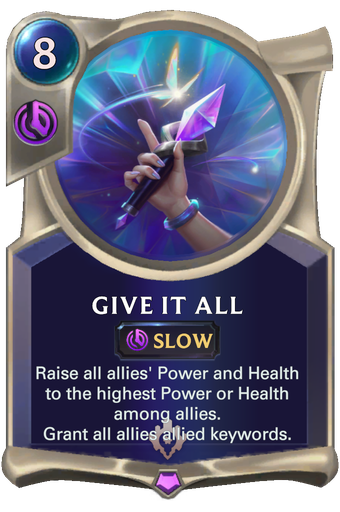 What is it? A Piltover & Zaun + Noxus Discard Aggro deck.

Special Power: Seraphine's Verse = Every other round, summon an Mk1: Wrenchbot.

Win Condition: Burn your opponent down before they have time to stabilize.

Strategy: I'd like to say you want to try to land a juicy Give It All, but realistically 99% of the time your optimal gameplay is to treat this like a standard Draven + Jinx hyper-aggro deck. That means you'll often discard Give It All just because it is the slowest card in your hand. If you do decide to play it, note that it doesn't seem to copy over any "bad" keywords -- i.e., if there's a Reckless Trifarian on board, your units can benefit from his 5|4 stats without copying his "Can't Block" limitation. It will, however, copy keywords like Quick Attack and Overwhelm which are often game-winning.

Mulligan Guide: Look for Precious Pet, Draven, Jinx, and anything that looks like a solid Aggro curve. 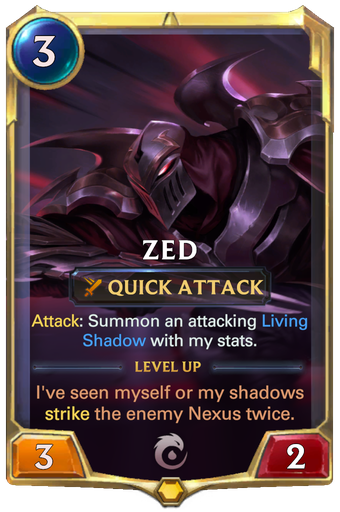 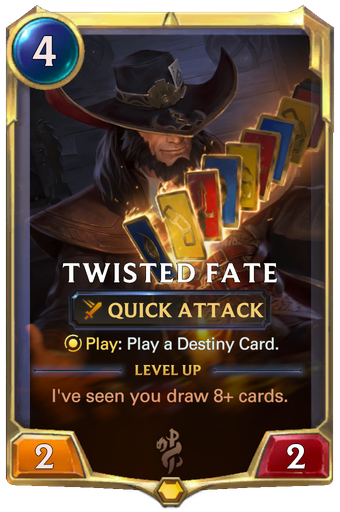 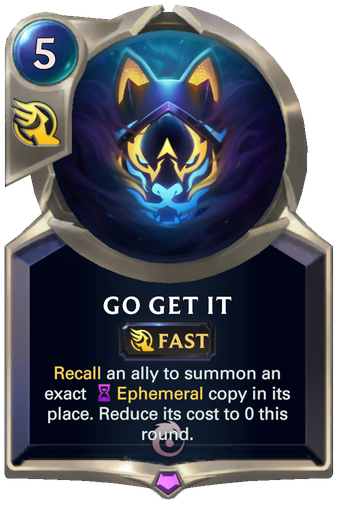 What is it? An Ionia + Bilgewater midrange elusive deck.

Special Power: Akali's Flow = Whenever you recall an ally, grant it +2|+2 . (Note this will never stack, since recalling will erase any previous buffs.)

Win Condition: Sweep in with buffed elusives. (Alternatively, you can also level Twisted Fate -- however most of your opponents will have either uber-buffed boards or lots of removal, so this approach isn't as fruitful as it usually is in constructed play.)

Strategy: Look for convenient ways to recall your units -- e.g., playing Navori Bladescout -> Navori Conspirator on the scout -> replay the scout, or Recall on a unit that you're assigning to block such that the attacker gets a shadow-block. In our experience, this deck doesn't have quite as much aggro as the Draven + Jinx deck but it also doesn't have as much late-game value as the other 3 decks so you're on a bit of a clock. Chip away at your opponent's Nexus as much as you can. Go Get It is best used on your Zap Sprayfin, Shadow Assassin, or 1x Windfarer Hatchling -- in a pinch, you can use it on your champions, but note that your the card in your hand will revert to a signature spell for as long as the ephemeral copy lives on the board.

Out of the Way 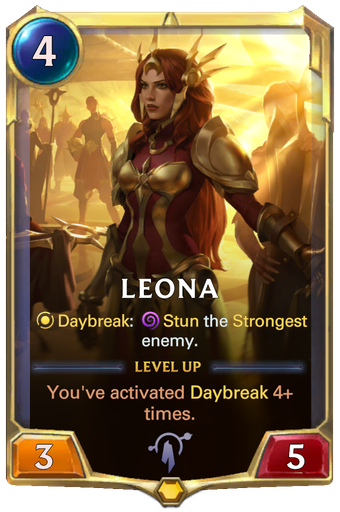 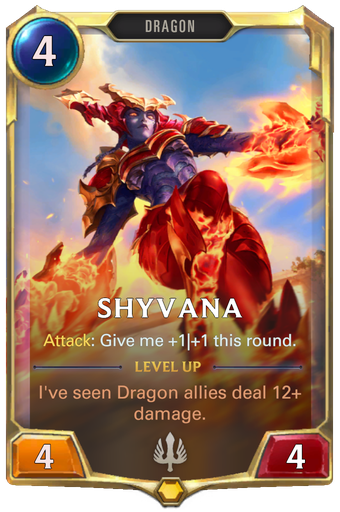 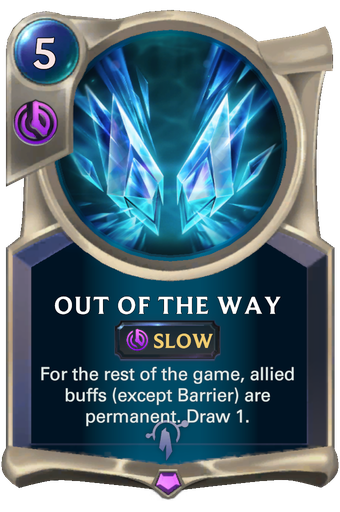 What is it? A Demacia + Targon midrange deck focusing on dominating the board.

Special Power: Kai'Sa's Sync = When allies attack, give them +1|+1 this round. (Note this becomes a permanent +1|+1 if you've played Out Of The Way prior to making the attack.)

Win Condition: Use Out Of The Way to give your units insane stats.

Strategy: Play this deck like standard Demacia/Targon Daybreak tempo, and remember that your units receive an additional +1|+1 when attacking so you should have an easy attack. Note that Out Of The Way only affects buffs that occur after it is played, so if you play say Solari Shieldbearer -> Out Of The Way then the extra +0|+4 will disappear at round's end. Also, don't get tunnel-visioned on Out Of The Way: while it is fantastic value over the rest of the game, it's also the only K/DA spell with no immediate benefit to the board state.

Mulligan Guide: Out Of The Way is only 1x, so for every matchup besides Draven + Jinx you'll want to keep it if you see it. Otherwise, look for Fleetfeather Tracker, Solari Soldier, Solari Shieldbearer, War Chefs, Laurent Protege, and Vanguard Sergeant. 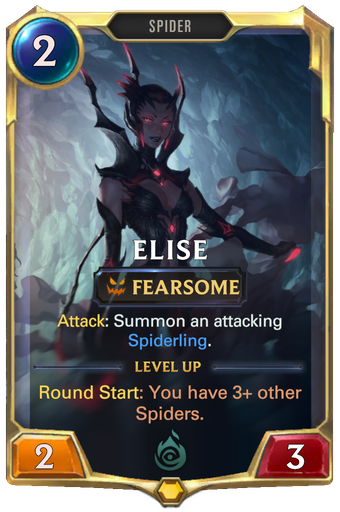 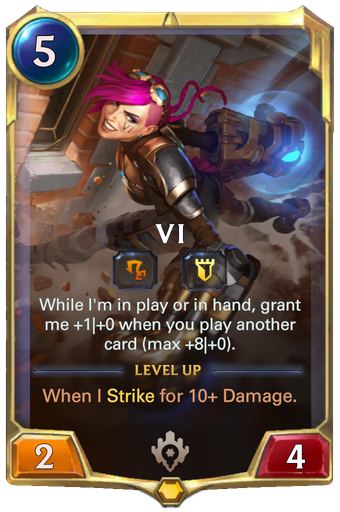 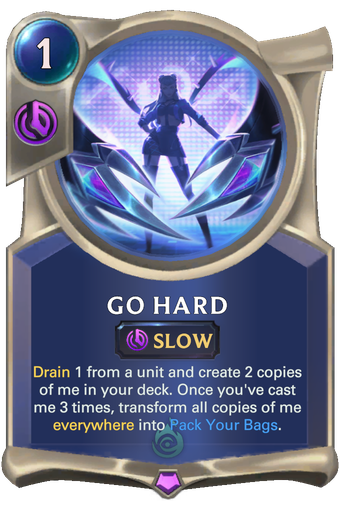 What is it? A Corina-control style Piltover & Zaun + Shadow Isles deck.

Special Power: Evelynn's Allure = When you cast your second spell in a round, draw 1.

Win Condition: Stall out the game while generating multiple copies of Go Hard until you can start clearing the board with Pack Your Bags.

Strategy: You'll want to try to save your spells until you can play two in the same round to take advantage of your special power. Ideally, you'll cast Counterfeit Copies onto Go Hard/Pack Your Bags and then Go Hard/Pack Your Bags itself, since that will also progress your win condition. Don't worry about whether you're copying the Go Hard version or the Pack Your Bags version since the effect is "transform everywhere". 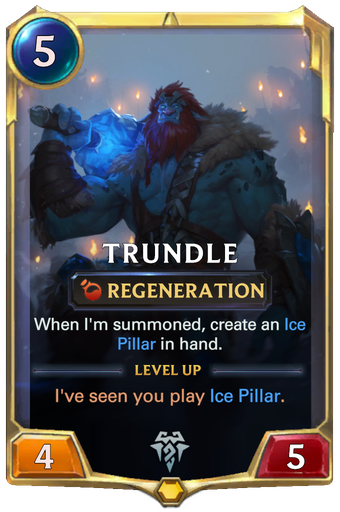 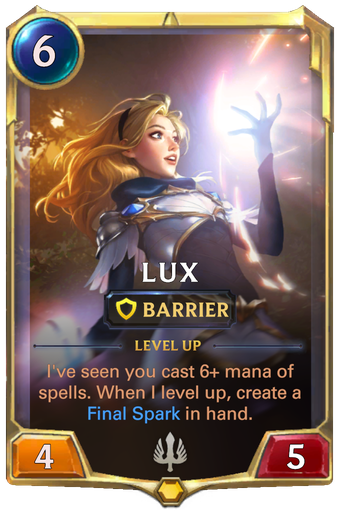 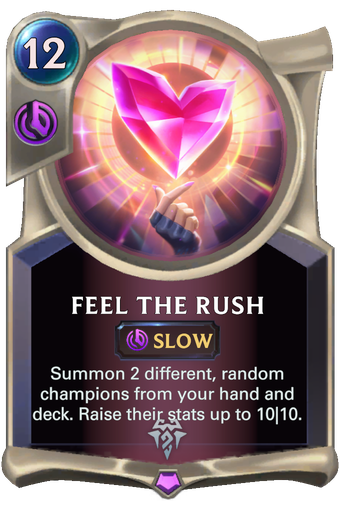 What is it? A Demacia + Freljord ramp deck.

Special Power: Ahri's Solo = Whenever you cast a spell that costs 6 or more, heal your Nexus 3.

Win Condition: Play Feel The Rush to summon 10|10 versions of Trundle and Lux, then either hammer your opponent with Trundle and/or use Lux's Final Sparks to finish them off.

Strategy: This deck plays out a lot like Warmother's Call or The Howling Abyss decks. It's critical that you ramp, ideally playing either Faces of the Old Ones or Wyrding Stones on curve into Trundle on Round 4. Remember that you get 3 HP whenever you play a big spell, so don't be afraid to take bigger liberties with your Nexus health.

Mulligan Guide: You'll want to dig hard for Trundle and a single copy of either Faces of the Old Ones or Wyrding Stones. Against the Draven+Jinx and Zed+Twisted Fate decks, also look for Avalanche.

What are your thoughts on this lab and the new K/DA cards so far?