Hail Champions! It's Thursday, and we've got a very special pair of decks to share with you for today's Legends of Runeterra spotlight. The first is NicMakesPlays' take on the new Zoe Diana Invoke archetype that's been going around the community -- but then we're splicing in a cutting-edge variant from Kuvira. This deck spotlight promises to be interesting to veteran players and budget players alike! 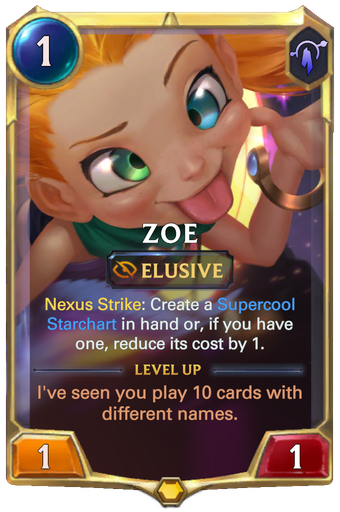 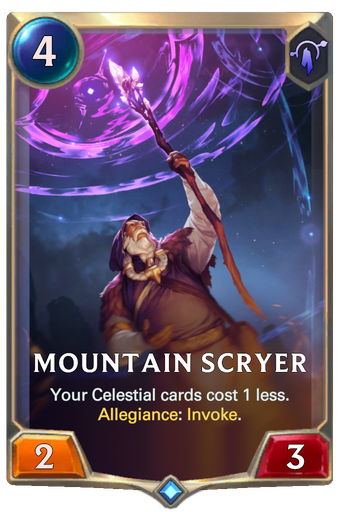 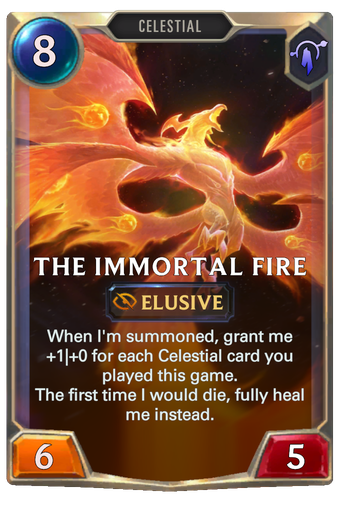 This is the most difficult to pilot deck we've showcased on Out of Cards yet. Don't be surprised if you lose the first few games playing this deck just because it's so hard to learn the optimal plays. It's also a very hard deck to "teach", since so much depends on reacting to the state of your particular game and the random cards you'll get from Invoke. In general, we'd describe the optimal gameplay as the following 4(!) phase plan.

Phase 1 is to threaten to flip an early Zoe. Note that this is different from actually committing to flipping Zoe -- you're not main-decking any protection spells like Bastion or Sunblessed Vigor. She's more like a 1-mana ticking time bomb that your opponent has to deal with. And unlike Teemo and Fizz, she'll generate a card if she strikes Nexus even once so even if your opponent later spends a card like Mystic Shot or Hush to deal with her, you've actually gained card advantage. Of course if you actually can flip her it's almost always worth it -- her L2 aura will make the game much easier. But if Zoe gets killed off or if you just don't draw her early enough, it will become time to transition into Phase 2.

Phase 2 is to become the Mayor of Value Town* (*trademark @TrumpSC) while stalling. Solari Priestess, Lunari Priestess, and Spacey Sketcher can all Invoke while simultaneously providing a chump body. Mountain Scryer will also almost always proc Invoke in addition to discounting all your celestial cards by 1. For context, the celestial cards are all already priced 1-2 mana cheaper than equivalent collectible cards. If you float at least 1 spell mana into Round 6, you can play Duskpetal Dust into Eclipse Dragon to get a 7|7 on board while generating 2 random cards! Meanwhile, utilize Hush, Sunburst, and Diana to disrupt your opponent's game plan. If you have flipped Zoe, this is often where the game ends: you'll play either The Trickster or The Golden Sister + The Silver Sister to give your entire board elusive and swing in for lethal. Otherwise, you can still play L1 Zoe at this stage -- she's still an extremely affordable value engine -- but appreciate that your opportunity to flip her in time to make a difference has probably passed.

If Phase 2 isn't winning you the game outright, then at some point you'll want to switch to Phase 3 and start applying some real pressure. This entails dropping one of the "Big 3" celestial units -- The Immortal Fire and The Great Beyond are both Elusive, and The Scourge has Challenger. All 3 have the "When I'm summoned, grant me +1|+0 for each Celestial card you played" ability -- and you will have played a lot of celestials by the time you summon these guys. Attacking with a giant Elusive should be straight forward. The Scourge requires a little more finesse -- he gives your entire attack +2|+2 and Overwhelm while he himself has Challenger but not Overwhelm, so you'll need an combination of him challenging specific enemies plus a wide attack, possibly swinging multiple times until you finally lethal your opponent.

Finally, we have Phase 4 which is usually reserved as a Hail Mary play when Phase 3 isn't cutting it : Atrocity to Nexus. Ideally you play this on either The Great Beyond or The Destroyer who both have native SpellShield and the "+1|+0 for each celestial" buff -- that means your opponent needs either a Deny or 2 offensive spells to stop it.

That's the gist at a high level, but you'll need to be able to react to and tailor your plays to each game as they develop. Which celestial cards you pick are extremely important -- especially the higher cost options you're offered during Phase 2. 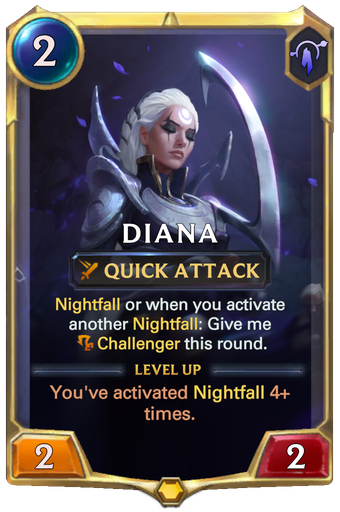 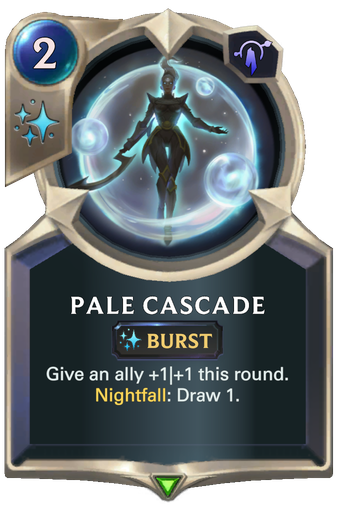 Don't expect to use Diana the same way you would in a traditional Nightfall deck -- at only 10 Nightfall cards including Diana herself, you'll rarely flip her much less make use of her L2 passive. Instead, you're using her primarily to take out a single unit -- usually an enemy Zoe. She also effectively adds another 2 Pale Cascades to the deck, which is an extremely valuable card. 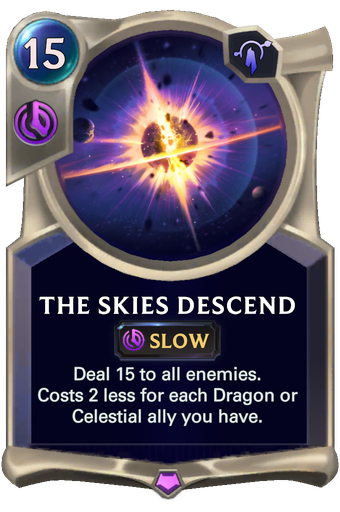 The Skies Descend is an interesting card in this deck. Since you play so many celestials, it will often have a great discount. Even if you have to pay 13 mana, though, having a "one-sided Ruination" is often worth the cost. Just remember that it only counts celestials and dragons in play, so the more units you have to chump block with the more expensive it can become.

Masters player Kuvira claims he's perfected this archetype by making some controversial changes -- see for yourself!

[I felt very underwhelmed by her], she only hits Zoe

Atrocity is only good vs Ez/draven, a matchup that is already favored for Invokes. I can see +1 Atrocity -1 Vengeance for tournaments!

On 2x The Ruination in place of 2x The Skies Descend

Real talk, how are you keeping a board [of enough celestial units to discount SD] vs plaza? They literally clean you up, Ruination is always gonna be more reliable IMO.

Because Asol works better in Demacia decks where you have and can protect a board. This deck runs Ruination meaning that you should be ready to abandon your board whenever you feel like you need to. Also Starshaping is your main finisher, it's a better Asol in almost every deck.

On the Not-Yet-Released Champion Aphelios

So which deck list is better, Nic's or Kuvira's? Honestly, we play tested both and couldn't tell a difference -- besides being incredibly similar, both are so complex that when we lost we still felt it was more to our own misplays than card choices. While LOR veterans will doubtlessly have their own opinions on the debate, we don't want to detract from the most remarkable takeaway here: Kuvira has unintentionally discovered LOR's best budget control deck. Even at its worse, Kuvira's deck is still more than capable of going toe-to-toe against any meta deck, and it is extremely budget-friendly with only 3 required champion crafts and 1 encouraged epic craft. That fact might be negligible to players with larger collections, but for new-to-Runeterra players jonesing for a capable control deck that they can ladder with, this deck is a godsend.

That will do it for this week's installment. Big thanks to NicMakesPlays and Kuvira both!