Ryan Giuliany, design lead for progression in Legends of Runeterra, just posted an article with new details about the reward system in LoR.

This article is a bit of a combo piece: part followup to the original one outlining our goals for LoR’s progression systems, part response to what we heard from you about your experience during the first preview patch. We’d also like to clarify some details about how the system works now that you’ve seen it in action.

It’s important for us to be extra transparent about what you get for investing your time and/or money. We’ve seen some players trying to estimate, but we think you should have the exact numbers—no guesswork required.

First, let’s talk about the different rewards you’ll encounter in LoR, like in the weekly Vault or the region rewards. Here’s a breakdown: 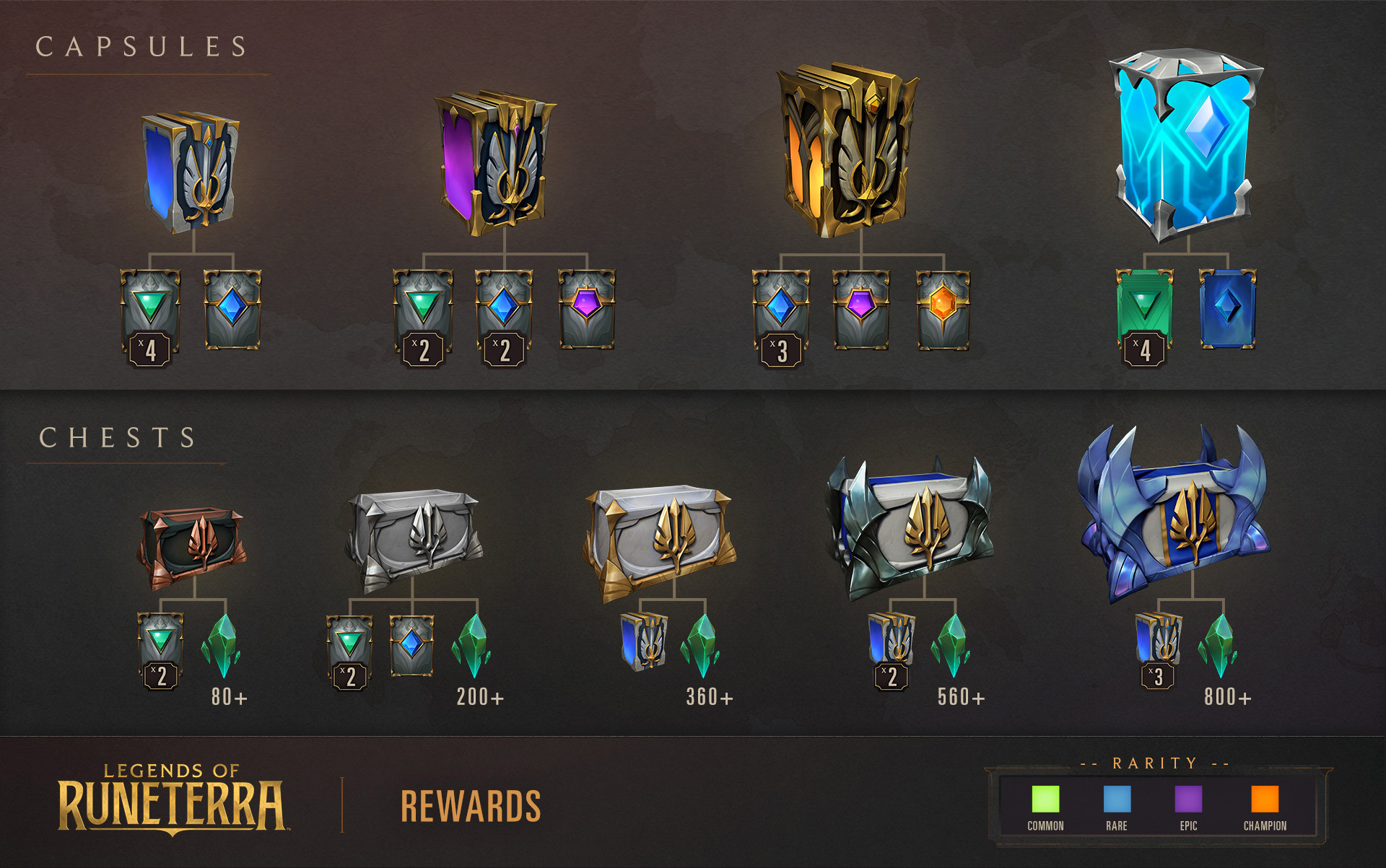 Also, you’ll never get a fourth copy of any card in LoR, since three is the max you can use. If it’s a Common or Rare, it’ll be replaced with Shards (25 and 75, respectively). If it’s an Epic or Champion, it will be rerolled into another card of the same rarity. Once you’ve unlocked ALL Epics and Champions, extra copies will also be rerolled into Shards (300 and 1000, respectively).

We’re super excited at how positively the region rewards system has been received overall. That said, there have been some questions about exactly what you get, how efficient your XP is later in each region, and just how much XP it takes to complete a region.

Here’s a full region-worth of rewards, which you get just by playing:

To unlock all those sweet, sweet rewards, you need to reach Level 20 in a region with a total of 52,500 XP. The first level takes 250 XP, and each subsequent level takes 250 XP more than the last, but the value of the rewards also increases (on average) with each level.

It was AWESOME to see all the clips of players cracking huge Vaults. For those wondering just how the Vault works, here’s another one of those infographics with the details for each level.

For someone who completes all their daily quests, a level 10 Vault should be well within reach, which guarantees a champion card along with other goodies.

Once upon a time, level 10 is where the Vault maxed out. However, feedback from testers who found themselves at level 10 early on in the week led us to add three more levels as stretch goals. They aren’t nearly as XP efficient as earlier levels, but it adds some extras for those who spend a lot of time playing the game.

Progression in the first preview patch worked pretty similarly to how we intend it to moving forward, but there are some exceptions:

Now that you have the numbers, let’s talk about how we landed on them.

One of our most important goals is that being “set complete” before the launch of the next set is achievable without spending a Coin, even if you’re not a streamer or a pro.

Exactly how much you need to play will depend on the size of the set. The first one is pretty big, but even this set hopefully won’t feel out of reach for a highly engaged player (about 7 to 10 games per day on average). If you don’t play quite that much, you’ll still have a ton of cards unlocked; for the first set, if you get your level 10 Vault each week, you’ll have at least 75% of the set before the next release.

Speaking of Coins, there’s another major goal for us: create a game where how much money you spend is NOT the deciding factor in your success as a player.

Believe it or not, we only recently added the ability to get wildcards with Coins as a result of strong feedback from early testers. When we had a version of the current system without the ability to directly purchase a card, we found that players who had less time to spend on the game felt totally left out. So we added the option to unlock cards by purchasing them, but kept it limited so players who prefer to spend time don’t get left in the dust either. Ultimately, we think the limited stock of wildcards each week strikes the right balance. If it turns out it doesn’t, we’ll keep looking for what does.

The progression system we have now is close to hitting many of the goals we set out to accomplish, but we’ve only seen it in action for one week, so we’re not celebrating victory just yet. While we’re likely going to tweak the numbers and make changes as we go, this has been a very promising start and we’re excited to see even more players get their hands on it in the next preview patch on November 14. We hope you are too. 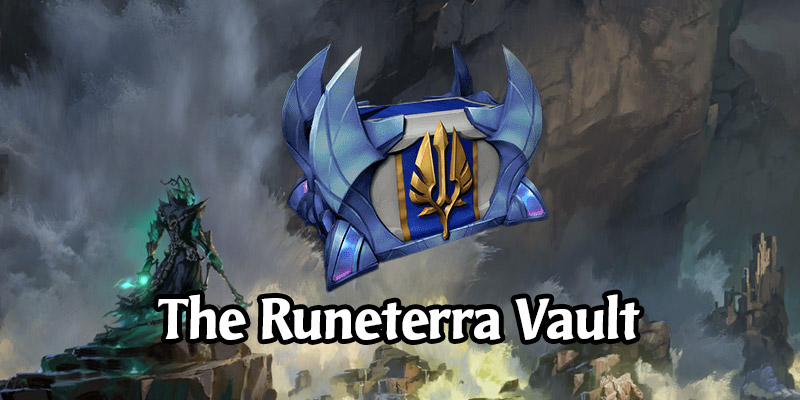 What Rewards Drop From Vault Chests in Legends of Runeterra? 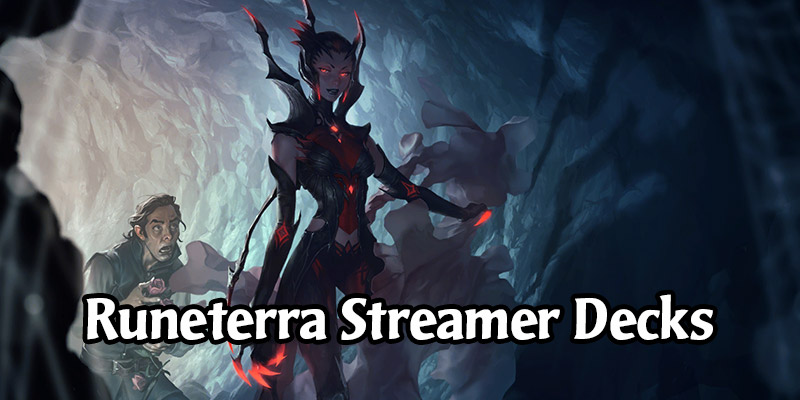 Legends of Runeterra Deck Spotlight - What Are the Top Streamers Playing? 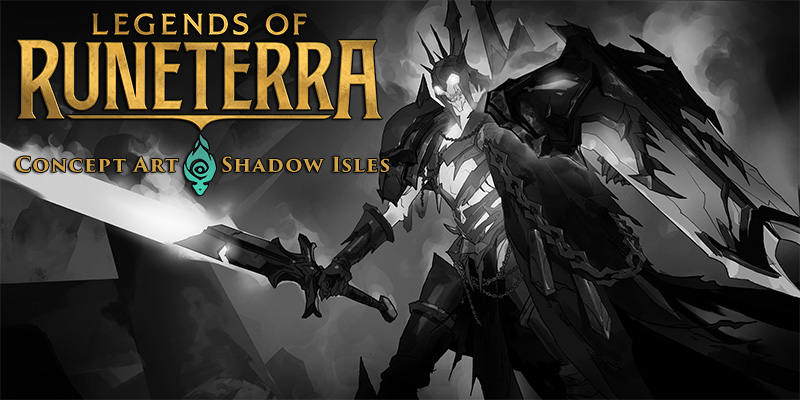