Esmus, Breath of the World 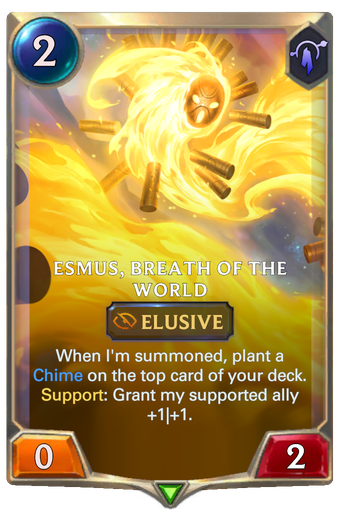 When I'm summoned, plant a Chime on the top card of your deck. Support: Grant my supported ally +1|+1.

Support - Attacking with a support unit will buff the unit to its right.

"...but I heard Esmus was created by the Caretaker himself, and with her birth, sound came to the world!" "I say lies! It is known that Esmus bears the face of an old singer who had the heart of an angel but the voice of the dead... until Bard himself granted her a voice of pure beauty!" "I say lies! Esmus is..." - An instance of the Birth of Esmus, a popular bard's game