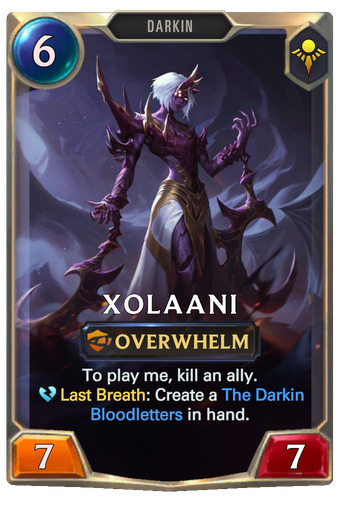 To play me, kill an ally. Last Breath: Create a The Darkin Bloodletters in hand.

Last Breath - These abilities take effect when the unit dies.

Overwhelm - Excess damage I deal to my blocker is dealt to the enemy Nexus.

Shurima's Ascended were doomed the moment they took up arms against the Void. This was an enemy that could never be beaten, and while the god-warriors were all but guaranteed immortality, their minds were never as resilient. Madness consumed them all. Xolaani, once a beloved and gifted healer, began using her hemomantic powers to control her brethren, and soon enough, the hatred between her and Aatrox boiled over into civil war.