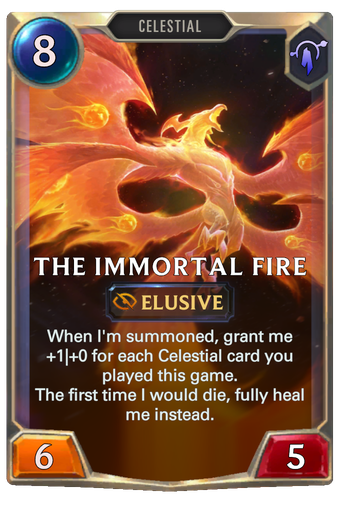 When I'm summoned, grant me +1|+0 for each Celestial card you played this game. The first time I would die, fully heal me instead.

"For ages, the Immortal Fire flew alone, till one day she saw a young bird with fiery golden wings like hers. She rejoiced, for she had never known another like herself. But as years passed, the young bird grew old and flickered out. The Immortal Fire grieved, for she had never known death. And so she wept sparks and sighed herself ablaze, till she emerged, renewed in body but burdened with knowledge." - Shuriman folk tale