What is Barrier in Legends of Runeterra?

Legends of Runeterra has many card effects that are common enough that they get their own keyword - a word or two that immediately tells you how the card works. Let's take a look at the Barrier keyword.

Negates the next damage the unit would take. Lasts one round.

Barrier is a card effect that initially may appear to only be useful on defence, but it is also great for the aggressor!

A unit with Barrier becomes protected from damage. Instead of taking damage when attacked, your Barrier will absorb the blow giving your unit the gift of life. Even smaller minions, such as a 1/1 Affectionate ChallengerBADCARDNAME become more powerful allies when given the protection of a shield since no matter how large of a hit they are dealt, they'll survive.

It should be noted that Barrier does not prevent a unit with Overwhelm from damaging your Nexus.

Keywords that Work Great with Barrier

Challenger is a great keyword to pair with Barrier. A unit with Challenger is going to be allowed to pick which enemy unit it blocks which when combined with a Barrier gives us a chance to let our bigger units through to the enemy Nexus and keeping our little units alive to rinse and repeat.

Playing Against Barrier in Legends of Runeterra

If you encounter Barrier in the wild, your best bet is to break the shield by losing as little as possible. If you absolutely must lose a unit, use one which has a low health and attack value. 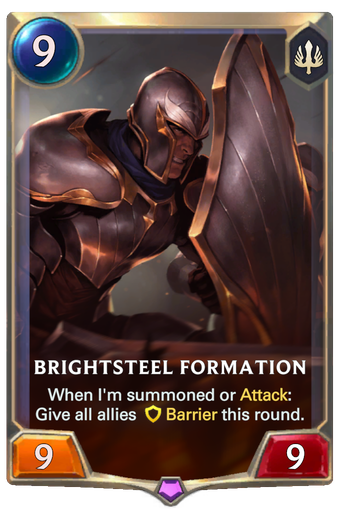 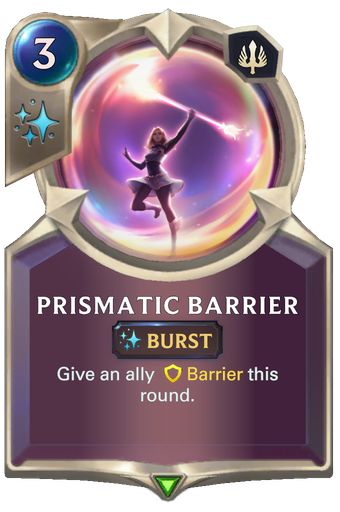 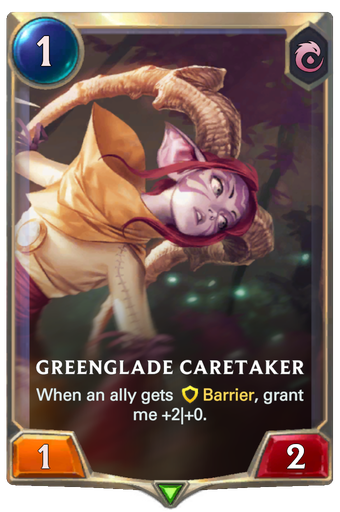 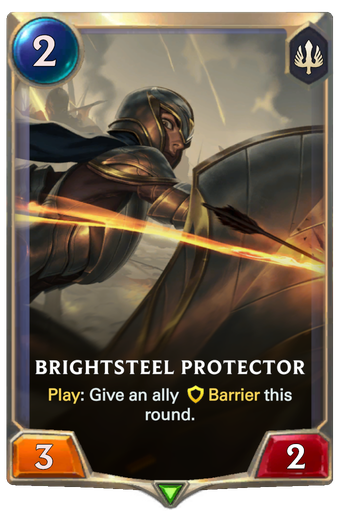 Here we have four different examples of how Barrier works in Legends of Runeterra.

Brightsteel Formation is a unit that has an innate Barrier, meaning it will start with one on the field. In addition to that, its play and attack effect can both give your entire side of the board barriers - talk about overpowered! Though this does come at a great cost - 9 mana.

Prismatic Barrier is a spell that simply grants an ally Barrier during the current round. Due to it being a Burst spell, it can be played at any time you would like so it can be used for very favourable engagements when your opponent is blocking and causing certain death to key units.

Brightsteel Protector is a unit that although it does not have Barrier itself, upon entering the battlefield it will grant one of your chosen allies a Barrier.

Greenglade Caretaker is a unit that synergizes with the Barrier mechanic. Having one of these on your field with other Barrier-involved units and spells will quickly give it great numbers of attack. Unlike Barrier itself, we keep the attack permanently provided the unit doesn't die.