What is Deep in Legends of Runeterra?

Legends of Runeterra has many card effects that are common enough that they get their own keyword - a word or two that immediately tells you how the card works. Let's take a look at the Deep keyword.

Deep is a keyword exclusive to Bilgewater. Units with the Deep mechanic have a +3|+3 boost if your deck has 15 or less cards (or rather, you're deep into your deck).

Keywords that Work Great with Deep

Deep naturally has synergy with Toss, another mechanic found in Bilgewater. Tossing cards will naturally get you closer to the magic number of 15 by tossing away (no pun intended) cards from the bottom of your deck. Just be careful not to go overboard with the tossing or you may end up in deep shit (pun intended this time).

Aside from Toss, effects that will help you control the board and stay alive (theoretically anything, but Lifesteal is probably the most direct example) will allow you to stay alive longer, getting you closer to the magic number of 15.

Playing Against Deep in Legends of Runeterra

First thing is first: If your opponent is playing Deep, they're most likely also playing Toss, meaning they will be throwing a lot of cards away. When your opponent tosses a card, you can make a mental note of any important cards that they toss as they're no longer in the game. If your opponent is tossing away too many cards, they may find themselves close to an empty deck. At that point, simply staying alive the best you can will win the game as attempting to draw from an empty deck in Legends of Runeterra will cause a player to instantly lose the game.

Keep track of how many cards your opponent has in their deck at any given time. If they're close to 15, you can start preparing yourself for any Deep units your opponent might play.

Additionally, if your deck is aggressive, playing fast will allow you to win the game before Deep becomes a problem. It may even force your opponent to play units with Deep without the +3|+3 boost.

In fitting with the aquatic theme of the keyword, all Deep units are Seamonsters (a new unit tribe introduced in set 2). 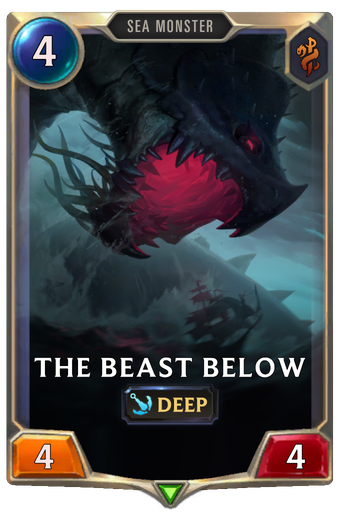 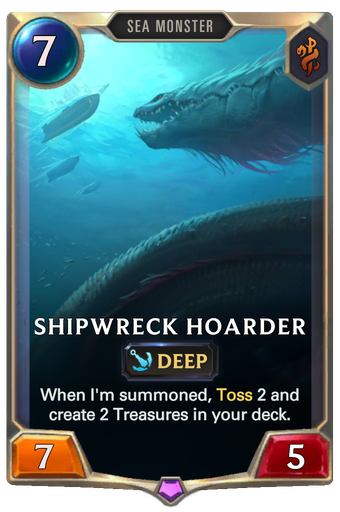 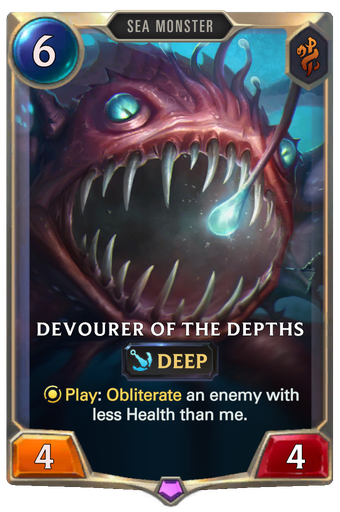 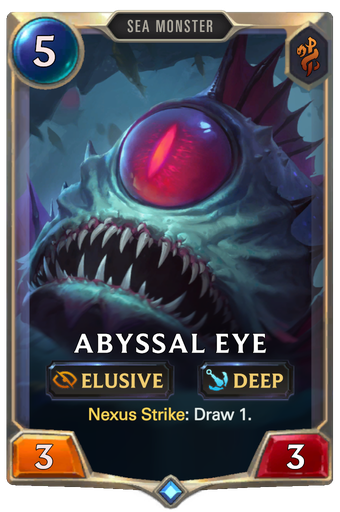 The Beast Below is a simple Deep unit that only uses the Deep ability and no other effects. It starts out as a 4 mana 4|4, but will become a 4 mana 7|7 (possibly playing off of the Hearthstone meme) when you have Deep active.

Shipwreck Hoarder is a larger Deep unit that will Toss 2 when you play it and shuffle two Treasure cards into your deck. This means that it won't actually get you closer to the 15-card threshold needed to activate Deep, although all the Treasure cards are extremely powerful and are immune to being tossed away.

Devourer of the Depths is the second card in the game to use the Obliterate keyword. When played, it will Obliterate a unit with less Health than itself. While the Deep threshold is active, this will (obviously) extend the number of targets you can reach with it.