What is Landmark in Legends of Runeterra?

Legends of Runeterra has many card effects that are common enough that they get their own keyword - a word or two that immediately tells you how the card works. Let's take a look at the Landmark keyword.

Play onto the board for unique, ongoing effects.

Landmark is a mechanic introduced in Monuments of Power. Landmarks are placed on the board, as you would a unit. They however do not count as a unit for the purposes of cards that affect them. Despite what their appearance might suggest, Landmarks use your normal mana when you play them, not your spell mana.

Of interesting to note is that Landmark is both a card type and a keyword. All Landmarks have the Landmark keyword and associated icon.

Keywords that Work Great with Landmark

Although there are no keywords that directly synergizes with Landmarks, you will want to make your deck around being able to keep your Landmarks around. Keyword abilities that help you maintain life and board presence in the game (Lifesteal of which would be the most direct example of this).

Playing Against Landmark in Legends of Runeterra

Of note is that Landmarks are slow to build up and cannot defend. Going aggressive will allow you to deal with your opponent before Landmarks become a problem, and any Landmarks they have they may not wish to play as it will be slow to help right away.

Cards like Divergent Paths or Crumble will work as direct Landmark destruction. Do note however that a Deny will be able to stop this and the opponent will be able to protect their Landmark.

If you can't go aggressive to end the game quickly or destroy the Landmark, do your best to situate the board as to lessen the impacts of the Landmark as much as you can. 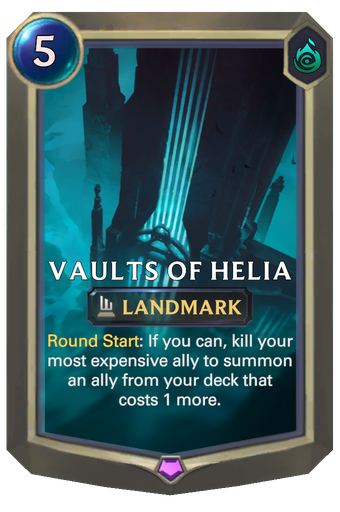 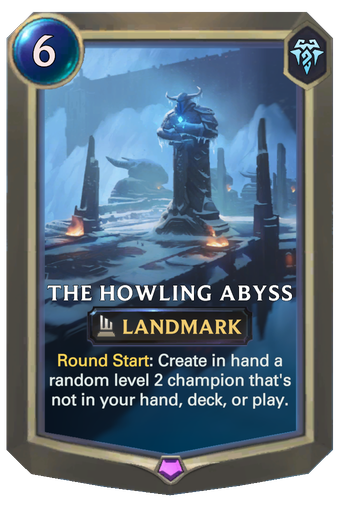 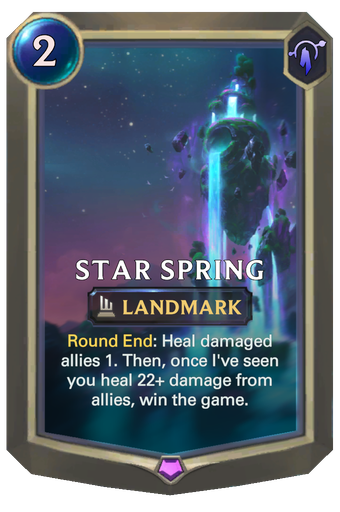 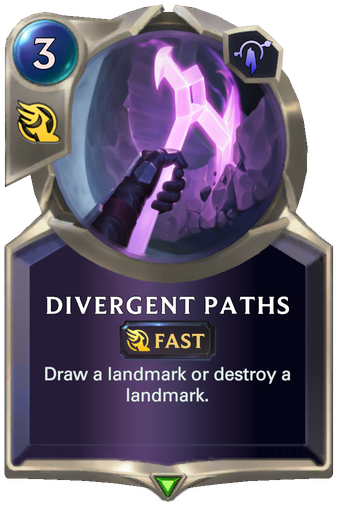 Vaults of Helia is a Landmark for Shadow Isles, and the very first Landmark revealed during the reveal season of Monuments of Power. At the start of each round, it will destroy your most expensive unit to summon one from your deck that costs 1 more than the destroyed unit. It is important to note that if the unit summoned by this effect survives a turn, it will die at the start of your next turn as it will be the most expensive unit on your board, unless you play one that's more expensive in that time.

The Howling Abyss is a Landmark for Freljord that adds random level 2 champions to your hand that aren't on your board, hand, or deck each turn. Although upgraded champions are strong, they will be less strong in a deck that isn't specifically designed around them. The high cost, randomness of the champions, and slow effort over multiple turns makes it a mostly inefficient card for competitive play. It however will provide some fun and entertainment from game to game.

Star Spring is a Landmark for Targon that will heal your damaged allies (including your Nexus) for 1 at the end of each round. If it heals a total of 22 Health over the course of a game, you will instantly win the game. Even if you don't manage to win from this effect though, the healing may help to maintain board presence and life in the game. Due to its potential to win the game, it may act as a target for your opponent to act on which can be a good or bad thing.

Divergent Paths is not a Landmark itself, but is a card that is either pro or anti-Landmark, being able to draw one from your deck or destroy one on the board.