What is Plunder in Legends of Runeterra?

Legends of Runeterra has many card effects that are common enough that they get their own keyword - a word or two that immediately tells you how the card works. Let's take a look at the Plunder keyword.

A card triggers its plunder ability when played if you damaged the enemy Nexus this round.

Plunder is a keyword introduced in Rising Tides, the second set of the game. Units with Plunder will have a bonus effect activated if you the enemy Nexus has been damaged on the turn that you play them. As its pirate-like name would suggest, the mechanic is largely found in Bilgewater, but it can occasionally be found in Freljord.

Keywords that Work Great with Plunder

To damage the Nexus, Elusive units will allow you to bypass the enemy units and get some damage in (provided they don't control an Elusive unit themselves). Overwhelm will also allow you to partake in combat normally, take out a unit and deal some damage to the enemy Nexus. Both of these keywords can be found in Bilgewater.

Playing Against Plunder in Legends of Runeterra

If you don't want Plunder effects to activate, simply not allowing them to damage your Nexus is the most effective way to do things. If your opponent does manage to deal damage to you, note that all Plunder effects they can use will be active.

If your opponent isn't using any Bilgewater or Freljord cards, you do not need to play around Plunder at all. Noxus however will have some easy ways to trigger Plunder if your opponent is running it in combination with the other regions. 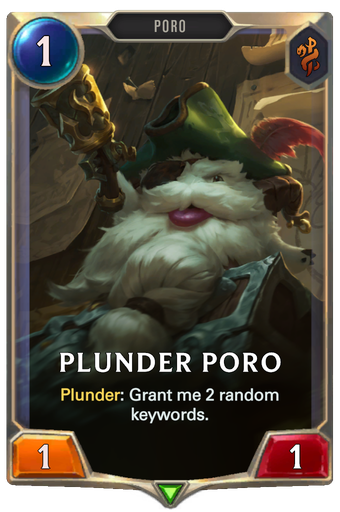 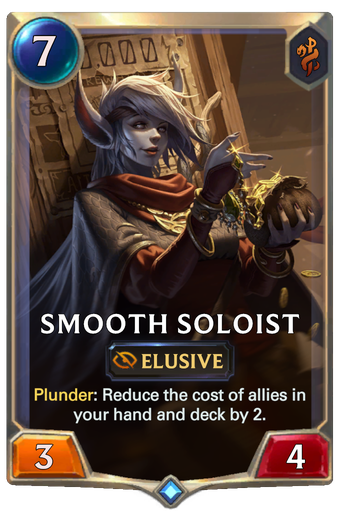 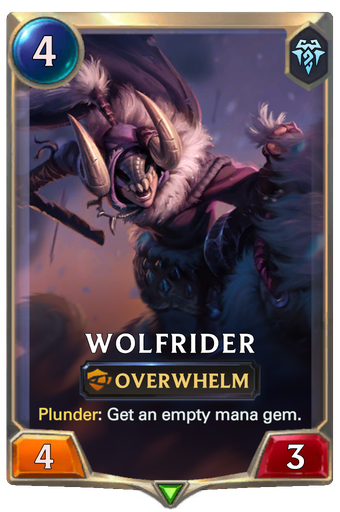 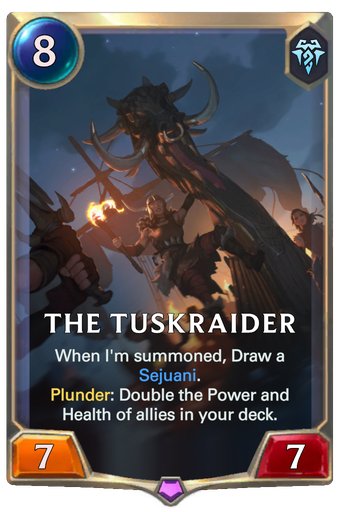 Plunder Poro is a small 1|1 for 1 that will gain two random keywords if its Plunder effect is activated. This effect is usually not a huge deal, so playing around it is not particularly needed. Sometimes, it can even low-roll into Ephemeral and actually be a downside since it will then die that turn.

Smooth Soloist is a much larger unit with this effect. Its high cost makes it harder to get damage in first, but its effect is pretty powerful. If you get it off, every unit in your hand and deck will cost 2 less to play. EVERY SINGLE ONE OF THEM. With Elusive, it even has synergy with a second copy of itself, allowing you to attack through enemies and get the Plunder effect for the second copy to trigger.

Wolfrider is a Freljord unit with Plunder. Its effect is quite simple, but also very powerful, allowing you to ramp up 1 mana. With Overwhelm, it has synergy with a second copy of itself.

The Tuskraideris a card with a very powerful Play effect, doubling the stats of everything in your deck (but not your hand, unlike Soloist). Its Plunder effect is a tutor for Sejuani, which combine with the normal play effect, will have its stats doubled.