What is Reforge in Legends of Runeterra?

Legends of Runeterra has many card effects that are common enough that they get their own keyword - a word or two that immediately tells you how the card works. Let's take a look at the Reforge keyword.

Create a random blade fragment still needed to restore the blade. Once you've cast all 3, create Blade of the Exile.

Keywords that Work Great with Reforge

Reforge can be paired with Augment as all the blade fragments and the restored blade itself will be created cards to contribute to boosting the Attack of units with Augment.

As all the blade fragments do something, these can be paired with effects that work well with them. All the fragments synergize with each other. You can buff a unit's Attack with Glinting Blade Fragment, and the buffed Attack works well when paired with the Overwhelm on Heavy Blade Fragment or the Quick Attack on Keen Blade Fragment. The restored blade will instantly grant all these effects to one card which can make it a force to be reckoned with. Units that naturally have Overwhelm or Quick Attack are also a good target for Glinting Blade Fragment as you will only need to spend a single resource on them instead of multiple.

Playing Against Reforge in Legends of Runeterra

Reforge exists exclusively in Noxus, so if your opponent isn't playing Noxus in their deck, then Reforge will never be a problem for that game.

There are few Reforge cards in the game, totaling only 4. If your opponent runs 3 copies of each card, this equals 12/40 cards in their deck meaning that the Reforging will probably start a little bit slow. This will give you more time to prepare and less time for it to become a threat.

Even if the Reforging occurs quickly though, one thing you can do is take note of which blade fragments have been played this game and which ones haven't. If you can try to remember (or write down somewhere) which fragments have been played, you can get an idea of how close your opponent is to creating a Blade of the Exile. Even if your opponent has played all the fragments and you know they have a finished Blade in hand, Riven requires her to have the blade in hand when played to upgrade. If you notice your opponent isn't playing a Blade of the Exile in their hand, this means that they might not have Riven in their hand yet.

It does of course also help to remember what each fragment does. If your opponent is playing Reforge with Piltover & Zaun, this means that they may also be playing Augment cards where Nyandroid or Viktor can become a threat. In a pinch, the Blade of the Exile can also be countered with a Deny, although the individual fragments themselves cannot because of their Burst speed. 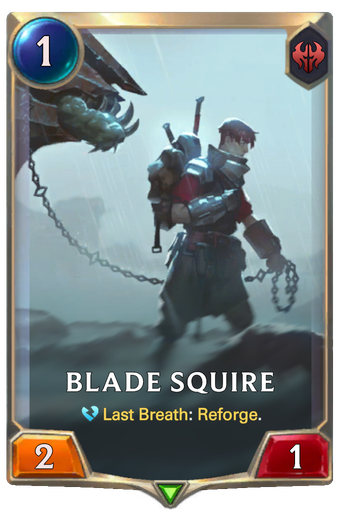 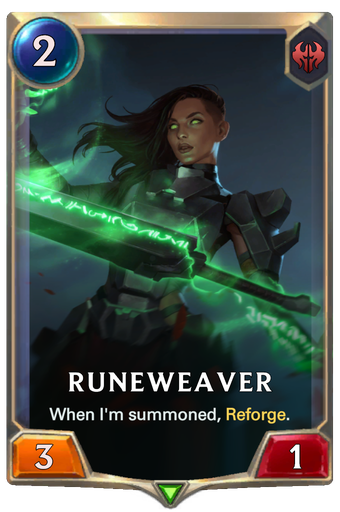 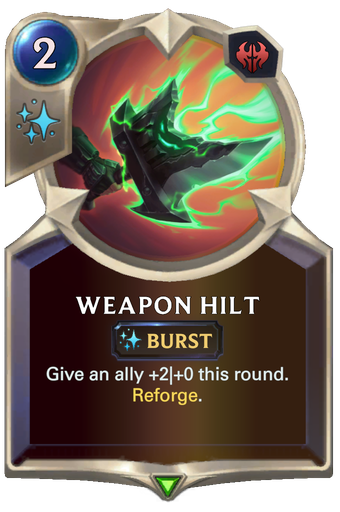 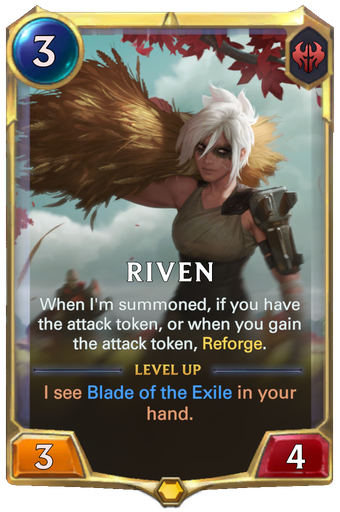 Blade Squire is a 2|1 Unit that adds a blade fragment to your hand when it dies.

Runeweaver is a 3|1 Unit that adds a blade fragment to your hand when it's summoned (not just played).

Weapon Hilt is a Burst spell that gives something you control +2 Attack for the turn as well as adding a blade fragment to your hand. Despite what the name and appearance might suggest, it is not a blade fragment.

Riven is a champion that uses the Reforge mechanic. Whenever you gain an attack totem, it will Reforge. Reforging is also useful for it leveling up because it levels up when you have a Blade of the Exile in hand when you play. It further benefits from this by doubling the first Attack buff applied to it each round, which can include the Blade of the Exile.