What is Slow in Legends of Runeterra?

Legends of Runeterra has many card effects that are common enough that they get their own keyword - a word or two that immediately tells you how the card works. Let's take a look at the Slow keyword.

Slow spells can be cast outside of combat and other casting. The enemy can respond.

Slow is a spell descriptor, telling you when the spell will resolve.

It is the slowest of the three spell speeds. Unlike a Fast or Burst spell, it cannot be cast during combat, meaning you cannot use it as a combat trick to screw up your opponent's attacking step. You also cannot enter combat with any units until the Slow spell has finished resolving, and your opponent will always have an opportunity to respond to it with another spell.

To make up for these downsides compared to the other two spell speeds though, Slow spells tend to be more powerful. Compare Flash Freeze to Shatter. They both have the same effect of Frostbiting something, but Shatter costs 1 less mana and has a bonus effect if the unit already has 0 power. It makes up for this by having a Slow spell speed. Very expensive Slow spells can also have very game-swinging effects which can single-handedly win the game outright.

Keywords that Work Great with Slow

Slow is a spell-only keyword, so no one keyword works in conjunction with it. That said, Frostbite, Ephemeral, and Stun are fairly common effects to find on Slow spells, and their higher power can make them good choices in decks which focus on a strategy revolving around one of those keywords.

Playing Against Slow in Legends of Runeterra

Slow can be both the easiest and the hardest spell speed to play around in the game. During the combat step, you won't have to worry about any powerful Slow spells and thus, your plan of attack doesn't need to consider them. It however can be much harder outside of combat in the case of cards like The Ruination and The Harrowing, both of which belong to Shadow Isles, and have very different methods of playing around.

Playing a faster spell in response to a Slow spell can change the way the spell will play out in a better position for yourself. Slow damage spells can be countered with faster buff spells. If Ionia is part of your deck, a Deny can always be played in response to a Slow spell and cancel it altogether, which will often be a life saver against the other 2 cards mentioned. 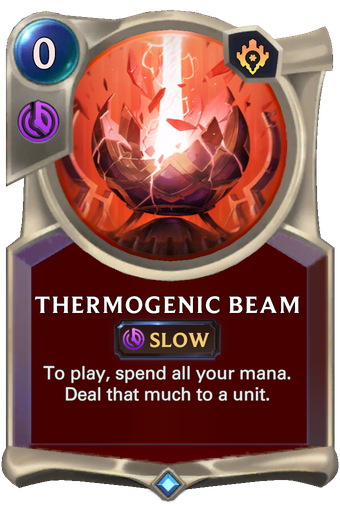 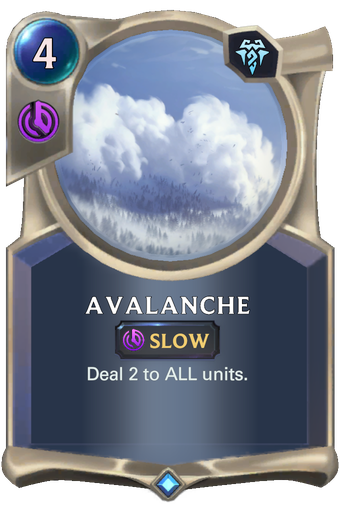 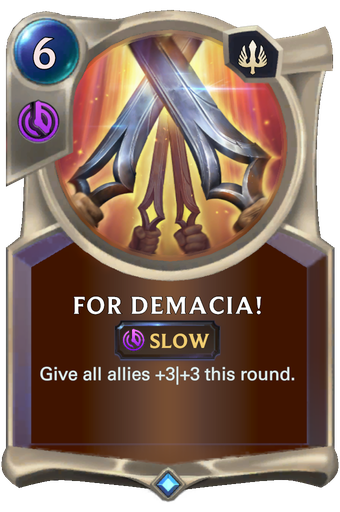 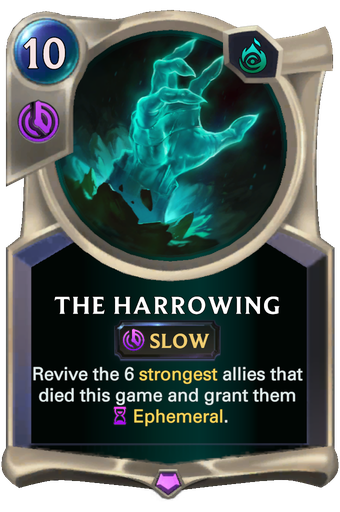 Thermogenic Beam is a damage spell with an interesting effect not seen anywhere else in the game. It's very flexible, but it will require smart mana usage to use effectively.

Avalanche is an example of what a Slow spell can do, being able to deal 2 damage every unit on the board for 4 mana.

For Demacia! is another example of design space used with Slow spells, buffing every unit you control for 1 turn. You can't use it as a way to mess with your opponent's combat when it's already chosen, but it will probably make your opponent panic with the massive buff you give to your units. It's collectible, but it can also be generated by Vanguard Sergeant.

The Harrowing is a card that often wins the game when it's played, by summoning a huge array of extremely powerful units. If your opponent plays this, spells that summon several tokens will be able to save you if you have a small board.