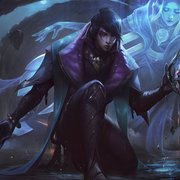 Cut 1x Thermogenic Beam for 1x Passage Unearned to hit a lot of the matchups coming up. Azir's reveal pushed me into making this change. It hits all the Sand Soldiers, Jarvan's cheat-in ability, Spectral Matron/Watcher combo, the Thralls from Lissandra's landmark, the resummoned units from Spirit Journey/Ancient Hourglass/Entomb, LeBlanc's clone, along with all the old meta targets like Anivia/Rekindler and Aphelios's Boxtopus. A one-of as tech will suffice.

Cut 1x Production Surge, 1x Unspeakable Horror, and 1x Vengeance for 3x Doombeast to fill out the three mana slot. The nightfall trigger will trigger before Timelines does, and we can usually find something better than a 3/2 body.

This is a Corina/Ledros control deck that utilizes the interaction between Corina/Ledros and Concurrent Timelines to pull the Dreadway and randomly win the game. I'm going to go through the card choices one by one to evaluate why they are in the deck.

Production Surge: This card generates a field of blockers, excellent for stalling for a turn. The whole point of Concurrent Timelines is that we can only summon units to defend, not play, so we have control over our blockers.

Concurrent Timelines: We run two copies because it really sucks to draw more than one copy, especially since this deck doesn't have stellar card draw or card generation. You don't have to play it as soon as possible either; If you have a Nightfall card in hand, you can use Timelines to activate it.

Rummage: Just card draw. It also drops cards like Timelines after we use it.

Mystic Shot: We're in PnZ, we play this card.

Unspeakable Horror: Helps with early aggression and generates us some card advantage later in the game.

Vile Feast: Lifegain and a chump blocker is pretty good. Sometimes it'll even kill a unit and help with Kindred!

Doombeast: A recent addition to the deck that helps gain you life, generate a blocker, and maybe kill the opponent if Corina or Ledros leave them very low.

Aftershock: Landmark removal for the Shurima meta that will be coming that doubles up as slow speed Get Excited.

Grasp of the Undying: Lifegain and removal.

Kindred: This card is so good in a control deck, because it'll let us double up on our removal, aggressively attack against decks with weak units and sometimes just win the game from growing so large. It also avoids Concurrent Timelines since Timelines only effects followers.

Withering Wail: Lifegain and removal. Bit of a trend in this deck.

Vengeance: So ridiculously good with Kindred, but also just a fine card in a control deck.

Commander Ledros: Sometimes, with Timelines active, you will just randomly win the game. That's why this deck is played.

Corina Veraza: If you Timeline-transform this to Dreadway, it deals 2 to 10 damage to all enemies, and it will almost always be 8-10 damage. That's insane!

The Ruination: Against bigger decks, this is a nice way to reset the board.