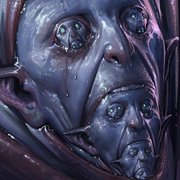 This deck aims to use discard synergy to maintain tempo into the late game, at which point you can drop a leveled Sion, which has a really scary interaction with The Harrowing. Because the allies summoned by The Harrowing are ephemeral, Sion will die when resurrected and summon his second form, which will rally and let you swing in again--for example, if your Harrowing summons two Sions, it will let you attack with both, then rally and attack with another 20 overwhelm worth of power. Fallen Reckoner enhances this finisher by blocking one of the opponent's blockers prior to the first attack, which could make it much harder for them to react to your waves of attackers.