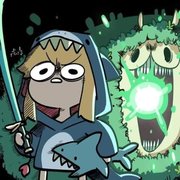 I made this deck around the time Reaver's Row came out a couple months back. I made this deck with the idea that Sand Soldiers were pretty good and to meme a bit I added The Time Has Come as well. Honestly the deck wasn't as bad as I thought but after the nerfs to Azir the deck felt unplayable. So now I'm just going back to it and refining it.

This deck is meant to be an aggro-combo deck that relies around 1 drops swarm and finishing with Reaver's Row. Honestly, this deck doesn't feel as bad as I thought it would even in this ping heavy meta. It can even race down some of the more aggressive decks of the meta granted you have a good hand.

I feel like this deck could be way better than it is right now and I'm just experimenting with a lot of cards at the same time.

I want to talk about what cards I thought are good and why I kept them and which cards I would decide to cut if I could.

(Main) Reaver's Row - Obviously this is the main card of the deck. Not a lot of people are running landmark removals especially the decks that this deck wants to beat. I always keep this in hand whenever I get it in mulligan and usually it'll be enough to swing the game heavily in my favor when I drop it on 5. Honestly, I thought that this card needs some form of Advance to be good but even without it, this card still slaps.

(Underrated) Imagined Possibilities - I imagined all the possibilities and honestly this card has been really good most often than not. Having the ability to speed up either Reaver's Row or Servitude of Desolation. No one plays around this. They see your Landmarks on Countdown 1 and laugh at your pathetic board but the moment you play this, throw out a cheeky Braum emote and pump your board to oblivion. Don't keep this in mulligan unless you have Reaver's Row and you're attacking second.

(Main) Make it Rain - This card is absolutely necessary for removal. Could also be used to buff Baccai Reaper or the occasional random Burgeoning Sentinel.

(Ok) Jagged Taskmaster - Honestly, when I made this 1 drop deck, I thought hey this card has to be played otherwise why run 1 drops. But after playing a bunch of games where this card is in the opening hand, it felt rather hard to get it's effect to proc without losing that much tempo. This card feels like bait and I'm still chewing on it just because I've won games where that +1 Attack did matter. 3/2 body is also pretty valuable as a Fearsome blocker so don't be afraid to play this without triggering Plunder. Could be dropped to 2 copies in the future. Keep this in mulligan only if you have a Fearsome 1 drop or Crackshot Corsair.

(Main) Azir - The issue with this deck is that there aren't really any good champions that synergize with 1 drops especially in Shurima/Bilgewater. I've tried Fizz, Zilean, MF, Ziggs, Sivir, GP, Nasus. This one is definitely the best one for this deck. If the nerf hadn't happened I would definitely say this card is absolutely key but with the nerfs this card feels a lot weaker than it used to be. Above average card, baits removal, but definitely not the key card of the deck. Keep in mulligan if possible.

(Underrated) Rite of Dominance - This card stomps as a combat trick. Really good for the aggro and midrange match up. Really good for both defense and offense. Gives your Fearsome attackers the chance to swing without blockers and allow them to survive when blocking. Hell this deck probably would lose half its matchups without this one card mainly because it can't block favorably. No one expects this card to be played so use it to your advantage.

(Ok) Rite of Negation - I'm only running this because of controls decks who really love their big removal. Could be cut down to 1 if you're not facing that much Control.

(Experimental) Sivir - Running this for extra late game finishers. Often levels around the turn you pop off with Reaver's Row.

(Ok) Inspiring Marshal - Your top end and allows you to stay in the game longer. This card being 6 mana does hurt it a lot so I wish they'd unnerf it.

(Experimental) Servitude of Desolation - Honestly, I added this card without thinking about it but I've won a lot of games with it because they couldn't deal with 2 big boards. Works well with Azir and Inspiring Marshal, just make sure they died first before anyone else because that's how the order of summoning works. This also summons Reaver's Row but with it being countdown 2, it hardly ever matters unless you're a god and topdeck Imagined Possibilities.

The 1 drops - I'm just gonna bunch up all the 1 drops together. Baccai Reaper (Ok). Not the best but Fearsome and 2 Health is good. Crackshot Corsair (Ok). Dunekeeper (Ok). Prowling Cutthroat (Main). This card is really good. Being the only 1 drop elusives in these 2 regions and a Plunder activator for Jagged Taskmaster. Shellshocker (Experimental). I had games where I needed 1 spell mana so I thought about adding this and it's doing its job.

The ratio for all of these 1-drops are very much interchangeable.

Cards I could add: