This is a guide for the Legends of Runeterra single-player PvE lab, "Lab of Legends".

Let us start by saying this new lab is a fantastic experience and, if you haven't played it at all yet, you might want to play a run or 2 "blind" just so you fully experience it. If you're struggling with some of the specifics or just want to make sure even your first run is fully optimized, though, we're here for you.

Choose a champion and challenge a gauntlet of increasingly powerful foes in this single player adventure!

It cannot be overstated how important early game tempo is in this game mode. Unlike normal ladder games where you can afford to build a slower midgame-oriented deck, you really need to establish early board to minimize Nexus damage and try to end the matches sooner rather than later to succeed against all 9 AI opponents. This means that items that reduce the mana cost of their cards and abilities that either give you additional mana or make certain cards cheaper are especially valuable. It also means that early game units are critical -- sometimes it's worth picking an Omen Hawk or a Mountain Goat that has a meaningless item attached just because it means adding additional copies of that card into your deck. Units that cost more than 5 mana are almost always bad choices -- you want to be ending these games around Round 5, not just starting to stabilize.

If you've had a run that felt particularly disastrous, spend a few minutes looking at your Run Summary. How many cards did your deck include for playing Rounds 1 - 3? How many were limited to Rounds 5+? It's much more difficult to make a balanced curve in draft formats than in constructed formats, but you still need to keep your early game in mind when making your card choices.

You will start your run by choosing a difficult tier and one of the 10 possible Champions for this lab. These champions are:

Selecting a Champion will start you with a fixed deck that includes 2 copies of said Champion along with 2 copies of 8 other cards from that region intended to synergize with that Champion (18 cards total).

Next, you'll chose your 1st global passive "Power". 3 randomly-picked options will appear, and you will have to chose 1. If you don't like your options here, you can use one of your 3 rerolls; however as Lady Merlin pointed out it makes more practical sense to just retire your run and start a new one. Each choice will have a quality (Common / Rare / Epic) corresponding to their rarity and overall power. Don't just snap pick the rarest option, though -- each merits consideration about how it will synergize with your intended strategy.

Turning a "Support" Champion into a Carry

If you're having trouble with any particular champion -- slower champs like Heimerdinger, Braum, Hecarim, and Taliyah in particular -- try this strategy:

Good examples of tempo champs include:

The logic behind this approach harkens back that golden mantra, "(Mana) Cost is King". Champions like Heimerdinger, Braum, Hecarim, and Taliyah are remarkably slow: not only are their mana costs large, but they also difficult to level up and/or very dependent on other cards to provide value. For this game mode -- and especially for Foundry, Guard Bots, and Viktor -- you want to be applying pressure and turning the proverbial screws around Rounds 5-7, not just beginning to stabilize. That's why we want to refocus the run towards an alternative champion who's more impactful in the early game.

There are four difficulty settings: Normal, Hard, Heroic, and Legendary.

The difficulties are champion-locked -- i.e., if you haven't successfully completed a "Normal" run with a particular Champion, that Champion will be unavailable if you change the difficulty to "Hard".

After you select your difficulty, starting champion, and 1st passive power, you'll face the following 9 opponents. Each run always faces the same opponents in the exact same order with the same abilities and deck.

There are 3 types of upgrades: cards, Powers, and Items. The cards just add copies of the designated card to your deck. Powers provide a powerful passive ability; you start the game with one and get to choose an additional Power after each Boss Encounter. The Items are the most complicated and most interesting --  they will all copies of a particular card (e.g., give it a keyword or reduce its cost). When you pick an item, you also receive an additional copy of that card to your deck. It usually pays to "stack" Items on a limited number of cards.

Lady Merlin has provided an list of Powers and Items and also designated particular options as generally superior; those options are designated by **asterisks**.

Items vary a little based on whether the target card is a unit, spell, or landmark.

Items linked to spells will not apply to Champion's signature spells (e.g., if you give Take Heart the Chalice of Harmony, Braum's Take Heart will still cost the full 3 mana).

The Golden Spatula is a new item added in the Patch 2.5 "upgrade" which will provide random benefits every time the unit is played. Specifically:

Reddit user shared these results when used with the 2|3 Aspiring Chronomancer:

Works on summon so playing from hand is not required.

If you beat all 9 opponents with a single deck, you will see a notification that you have earned an icon for the corresponding champion. To collect the icon, go to the "Home" screen and click the "Loot" button in the bottom right of the screen. 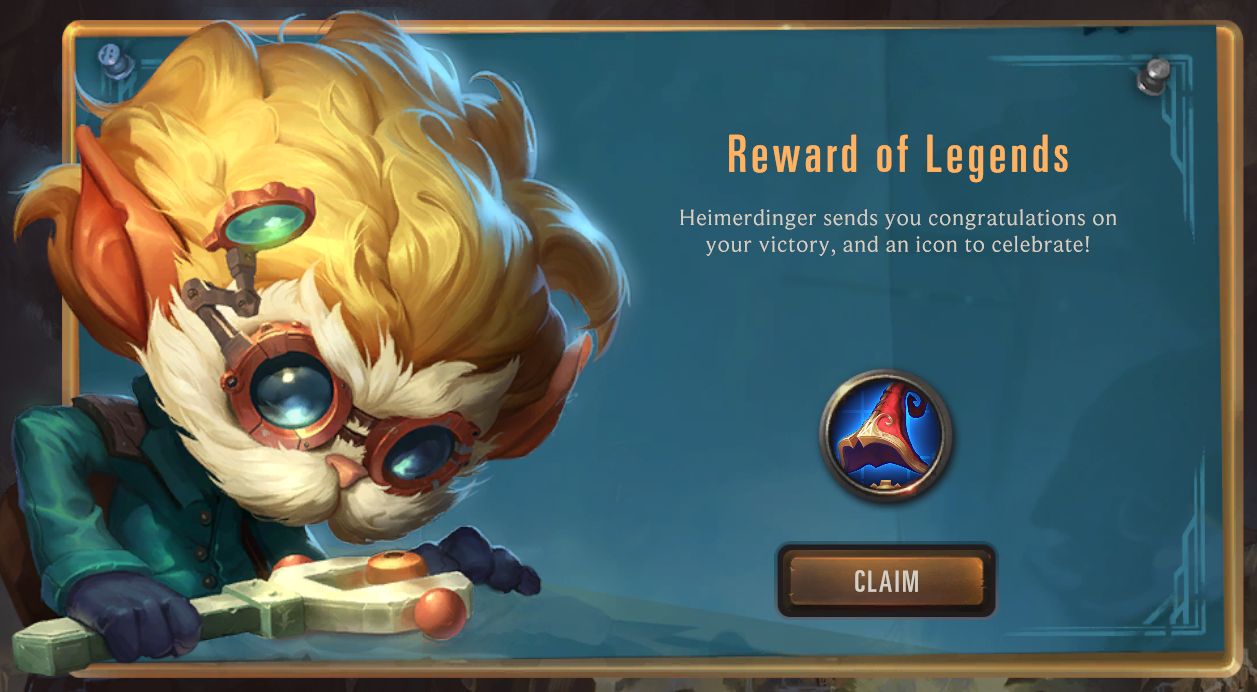 To change your current Player Icon to the new icon, go again to the "Home" and click on your current icon (the circular image near the top-left corner) to bring up your status page. From here, click on your icon again and you will receive a popup with all the icons you have currently earned. Scroll down until you see the new icon you want to use -- all the lab rewards will say "Legends Lab, (month and year of acquisition)" -- and select it.

When We've Seen Lab of Legends