Hello everybody and welcome back to some more Brawl Haul! There is not much I have to say so let us just jump right into this week's deck, featuring Emmara, Soul of the Accord!

The main purpose of our deck is to get Emmara onto the field on turn two and start flooding the board with tokens. Once we make a wide enough board, we can focus on getting tall through a variety of pump/anthem effects and start beating down the opponent.

What does Emmara do for our Deck?

Emmara is a fairly straight-forward card. she attacks someone and makes a 1/1 token, which are two things we want to do in our deck. There are three other commanders though that compete with her in this same design space, these being Trostani Discordant,  Ajani, the Greathearted, and Rhys the Redeemed, which out of all 4 I find Emmara to be the best. Trostani and Ajani both struggle from coming into play later than desired, making it harder to spiral a game out of control which is something I look for in a token deck. This leaves Rhys the Redeemed, which is a very strong card in Commander, the format. However, this mainly comes from her interactions with token doublers and her second ability to triple your tokens on board, which is something not possible in Arena right now. This leaves Rhys to be somewhat underwhelming in my opinion as her first ability is a poor rate and coming out turn 1 isn't very important when it is just a 1/1. 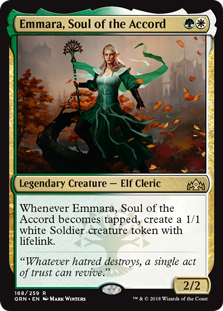 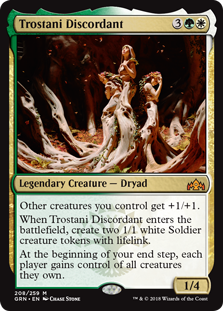 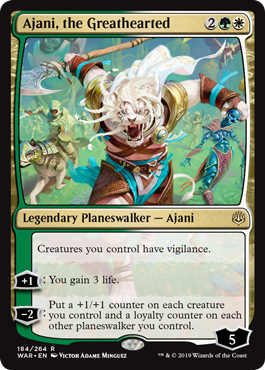 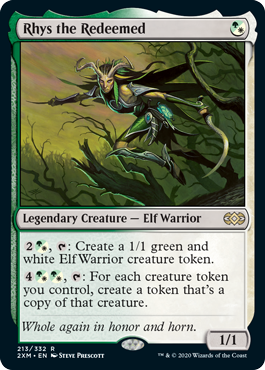 Emmara is a very strong two drop and she can cause games to spiral out of control fairly quickly if left unattended to. However, any of our opponents who play creatures can dissuade us from attacking, which is the main way we can get her tapped. Because of this, we fall back onto two main plans, either giving her evasion through flying or by using cards to tap her down. The best ways we have to do this are Luminous Broodmoth, Angelic Gift, Conclave Tribunal, and Ledev Champion. 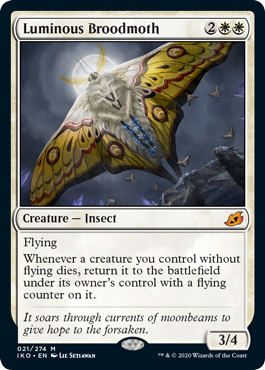 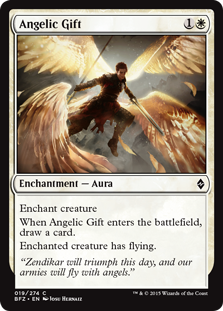 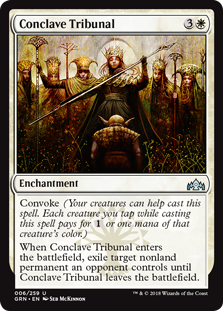 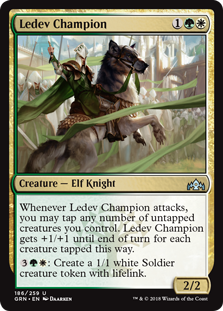 Luminous Broodmoth is occasionally a bit weird in that it comes down a turn later than we usually would like it to, but it being not only a permanent effect but also very easily giving our entire team flying in the face of wrath is amazing. Angelic Gift is also somewhat awkward due to it being hard to use our mana effectively if we play it on Emmara on three, but once again permanent flight attached to a cantrip is pretty good for this deck. As for cards that tap Emmara, Conclave Tribunal is easily one of my favorite Oblivion Rings that have been printed, as it eliminates a threat while still helping us make a larger board with Emmara. Finally, we have Ledev Champion, who just becomes massive. The lack of trample is a bit awkward, but we can often give him flying anyway since Emmara does not need it with the Champion on board.

Making the Board Wide

Aside from Emmara, we have some other methods of making our board as wide as possible to prepare for the eventual overrun effect. To do this we have Haazda Marshal, Oakhame Ranger, Trostani Discordant, and Basri Ket. 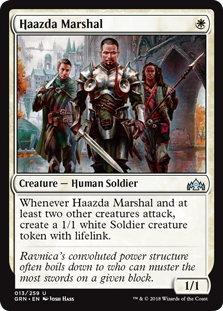 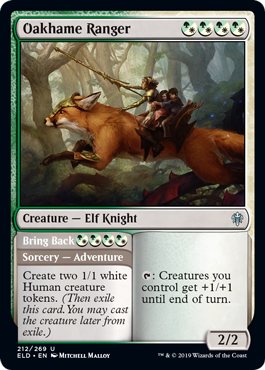 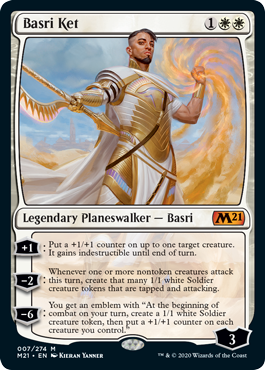 Haazda Marshal is either very strong or incredibly weak, depending on the matchup. Against control decks it excels at due to it being a 1/1 and thus, makes it feel bad to waste removal against it, while against aggro decks its fairly worthless. Oakhame Ranger and Trostani Discordant are both essentially the same, with both making 2 1/1s and them acting as an anthem effect. Trostani is typically better since she's overall significantly cheaper, but both they both perform well overall for the deck. Finally, we have Basri Ket, whose sole purpose is to downtick and create a bunch of tokens. His two other abilities are decent as well, with the uptick letting us swing with Emmara more and the ultimate winning the game, but generally, all he does in a given match is downtick.

Making the Board Tall

Once we fill the board we can focus on closing the game by making all of our small creatures massive with an overrun effect. The best cards we have to do this are Glorious Anthem, Return of the Wildspeaker, End-Raze Forerunners, and God-Eternal Rhonas. 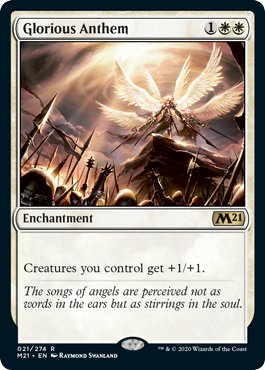 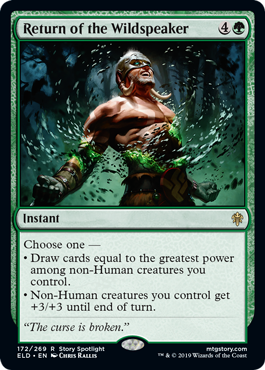 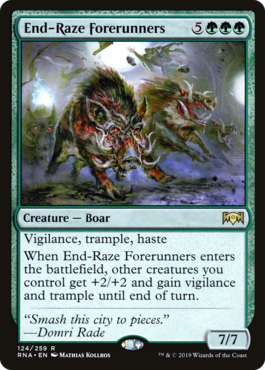 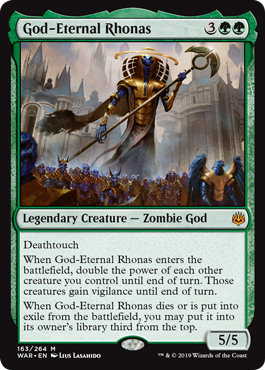 While not as explosive as the rest, when Glorious Anthem comes out early, it can make our board very hard to deal with as well as shut out other aggressive decks since its harder for them to deal with our board, not to mention it curves out great with Emmara as well to help her tap and get value faster. Return of the Wildspeaker is a great pump spell since every card in our deck besides from Haazda Marshal and Silverwing Squadron are non-humans, turning the spell into 5 mana +3+3 for our team at instant speed, which can often catch people off guard. Finally, we have End-Raze Forerunners and God-Eternal Rhonas, which both effectively do the same thing, with the Forerunners being better when our board is all tokens while Rhonas is better if we have any other pump effects. Both also provide vigilance which let us flunge, something I appreciate a ton since math is for blockers.

Like with every other deck I make, there are a few cards that stand out as not really fitting the rest of the main goals of the deck but still perform incredibly well. The ones this time around are Vivien, Monster's Advocate, Divine Visitation, and Camaraderie. 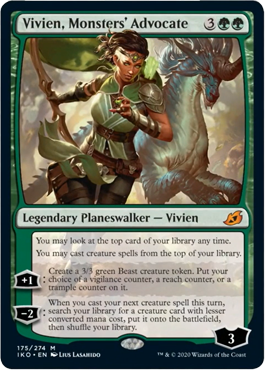 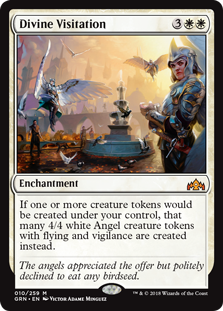 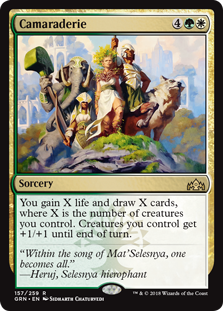 One of the biggest issues with Seleysna is the lack of card draw. Green only draws cards with large creatures and white is against card advantage as a concept, resulting in the deck having issues recovering from sweepers. This is where Vivien comes in as being able to cast creatures from our deck can often equate to drawing 2-3 cards. Her abilities are also strong as the downtick lets us flood the board more and the uptick just puts a body on board. Divine Visitation is obviously a strong card in a token deck as making 4/4 fliers with vigilance is typically better than 1/1s. Not much else to say about the card besides the fact I've sent Emmara into her death countless times when it's on the field because the angels close out the game faster than Emmara ever could. Finally, there's Camaraderie, which is one of the few ways to draw cards in Seleysna which is pretty neat. It is very common to draw 5-6 cards with it but the card is fine even when it is just for 3-4. The small pump effect is mostly negligible but sometimes it comes in clutch which is fairly nice.

Overall I had a very good win-rate with this deck as it felt like every matchup was winnable in some way or another. Due to having a powerful commander come onto the board on turn 2, it was often able to slow down aggressive decks to give us more of a chance and while control decks were harder for a reason I'll get into soon, we can sometimes snowball fast enough to beat them down before they can lock us.
The deck has two main weaknesses, both of which are tied back into each other and are fairly obvious, these being a weakness to sweepers as well as a lack of any true comeback mechanism. Against traditional board clears like Shatter the Sky and Storm's Wrath, we have Heroic Intervention, as well as originally Unbreakable Formation in early versions of the deck, but any effect that gives -X-X will typically clear everything we have, making any Bx/Bxx control decks fairly difficult for our deck to deal with.

Emmara, Soul of the Accord is another one of my personal favorite cards that are leaving standard when Zendikar Resurgent launches, mainly due to it carrying me in limited in a Naya Zoo deck. She is just such an interesting card to build around since there is so many ways of triggering her ability. Unfortunately, in standard it is mostly limited to attacking, convoke and a few random cards that cause creatures to tap, but that for the most part is still enough to trigger her consistently. In many ways, Emmara is similar to last week's commander, Prime Speaker Vannifar as there is so much stuff you can do with her, but it is limited by the small card pool of standard.

Anyway, that is all I have to say about this week's deck, I hope you all enjoyed it. Similar to last week's deck, I wouldn't recommend crafting this deck just because of the standard rotation happening soon and a decent chunk of the mythics and rares are going to be leaving. Like always, if there is any commander that you would want to see next, make sure to let me know! None of the commanders that are rotating feel that interesting to me so I'm up to any suggestions! Until next week, good luck brewing!