Hello everybody and welcome back to another article of Brawl Haul! With Zendikar Rising spoiler season being on the horizon, I’m very excited for the upcoming month to find as it is up there with my favorite planes. I’ll talk a bit more about the upcoming set at the end, so let us jump into this week’s deck!

The main goal of this deck is to use Thassa, Deep-Dwelling to flicker our own creatures, letting us abuse ETB triggers to ad nauseam. The main types of ETB cards we look for in the deck are creatures that can slow down the opponent, either clogging up the board or bouncing our opponent’s creatures, improve our draws, either through scrying or drawing more cards, or are just win conditions.

Blue has access to some of the strongest ETB effects, yet besides from Thassa, lack any good commanders for this archetype. Because of that, she is the only suitable commander for flickering and was pretty much designed to fill that niche. However, in addition to already having a great effect, she also can tap down creatures that are often overlooked and can give surprise lethal if we activate the ability once or twice. Not much else to say about her, to be honest, she is fairly straight forward and very powerful. 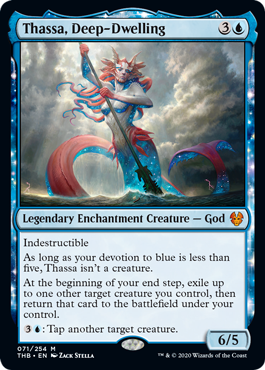 Slowing the Opponent Down

Due to Thassa relying on incremental value, we need to find a way to slow the opponent down, which luckily we have access to in a couple of different forms. We have cards that flood our board, such as Alirios, Enraptured, and Aven Eternal, as well as those that disrupt the opponents directly, such as Barrin, Tolarian Archmage, and Frost Lynx. 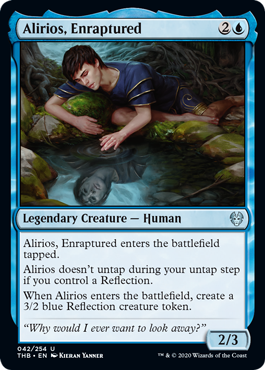 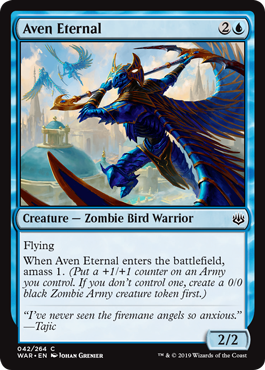 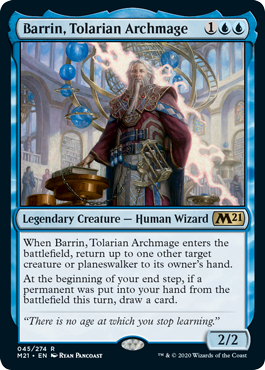 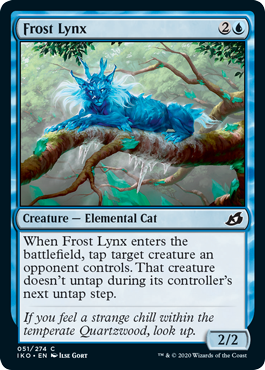 Alirios Enraptured pumps out a 3/2 every turn which can become a threat on its own if not dealt with. If up against an aggressive deck, it is essentially a 3 mana 5/5 without Thassa and only gets better from there. Aven Eternal does a similar effect, albeit a bit weaker. We do have some other Amass effects, but more often than not the 1/1 is just a chump blocker. On the other end of the spectrum, we have Barrin Tolarian Archmage, who can just bounce anything the opponent plays. While the second ability can occasionally draw a card, it is rather fringe. Frost Lynx is a lot like Barrin, where it can stop a creature from doing stuff for a turn, although slightly worse since it does not actually get rid of it as a threat. That said the redundancy is still invaluable as the deck needs to do whatever it can to slow the game down given the lack of sweepers blue has.

After Thassa enters play, the main thing we need to focus on is getting value out of her, with the easiest way being through just drawing cards or making sure we consistently draw useful cards. For straight card draw, we have Cavalier of Gales, and Cloudkin Seer while for filtering we have Dream Eater, and Overwhelmed Apprentice. 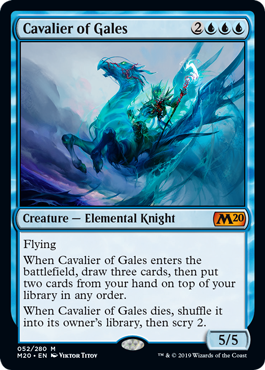 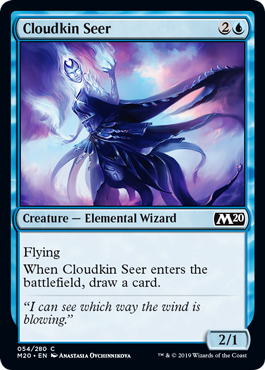 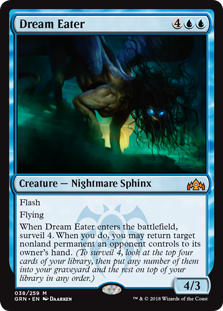 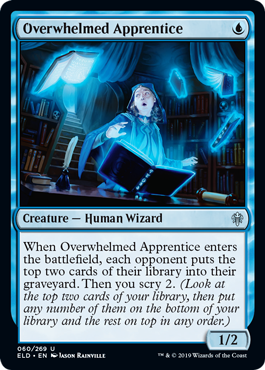 Cavalier of Gales is a great card as just a 6 mana 5/5 flier, but having brainstorm stapled onto it is also very good. While we do not have many shuffle effects to be able to abuse it, but we have a decent amount of scry to work with it. It also is just a recursive threat in the long run which is always great. We also have a card more focused on just card draw in Cloudkin Seer. Not much to say about it besides the fact it is an extra card every turn. In terms of card filtering, Dream Eater lets us both rid of a threat as well as filtering our next few draws. Dream Eater is easily one of the best flicker targets in the deck as it does pretty much everything we would want a card to do in our deck. Finally, we have Overwhelmed Apprentice, which is mainly for the early game but is also just a decent tool for making sure we draw good stuff.

Once we get to 7 mana or draw most of our deck, we can start using our win conditions. The three main ways we have to close out the game are Agent of Treachery, Meteor Golem, and Thassa’s Oracle. 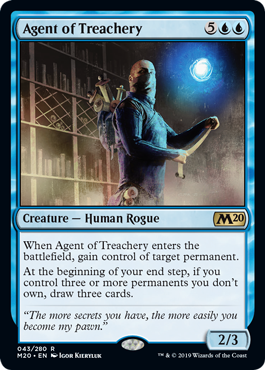 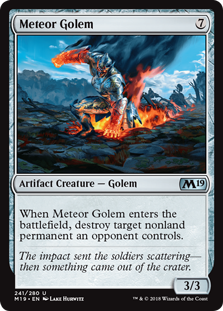 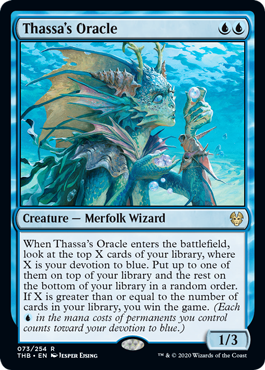 Both Agent of Treachery and Meteor Golem remove an opponent’s threat, with Agent of Treachery being almost infinitely better since it just steals them. Agent also lets us play one of my favorite archetypes in Magic, that being mono-blue land destruction. Typically after bouncing Agent or Meteor Golem a couple of times as both cards are typically a pain to deal with. For our other main win condition, we have Thassa’s Oracle, who is kind of lackluster to play normally but can just win the game if it goes long enough. Not much else to say besides that it is a great win condition in a deck that tends to have a high devotion to blue.

With every deck, there are a few random cards that performed significantly better than I originally thought it would in the deck. These cards are Altar of the Pantheon, Lazotep Plating, and Sublime Epiphany. 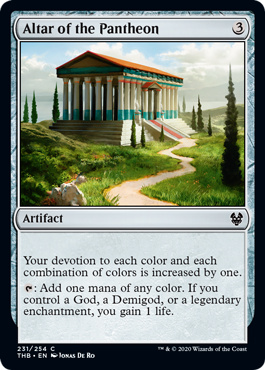 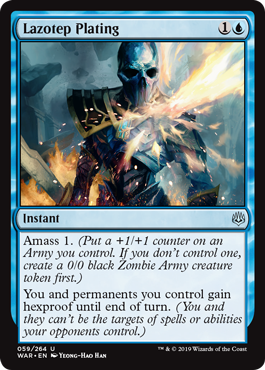 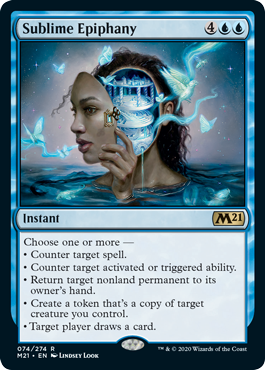 Altar of the Pantheon is a good source of ramp to help us get to our stronger ETB effects, but on top of that, it also helps stabilize against aggressive decks with the life gain. It slowly adds up over the course of the game and is just an overall strong card. Lazotep Plating is on an equal level to Heroic Intervention in terms of blowing out the opponent. It is essentially a 2 mana counterspell for removal that can also make sure nothing else catastrophic can happen in a turn. Finally, we have Sublime Epiphany. For 2 more mana, it is essentially Cryptic Command on steroids and so any slow decks running blue should include it in my opinion. Every mode on it is great and we can consistently activate 3-4 of the effects.

Easily the strongest aspect of this deck is how grindy it can be. One of the benefits of Thassa is that she gets stronger every single turn she is out on the board This gives us a strong matchup against most control decks and while I do not think this is always going to be the case, it also had a good win rate against aggressive decks due to having a decent amount of cards to slow things down.

All that said, the deck had two main weaknesses. The first is that it is incredibly telegraphed, which results in Thassa being countered more often than not, and the other being that it doesn’t win fast and often feels monotonous to play. More often than not the deck does the same thing constantly and it just becomes boring after a few matches. I am sure there are people who would enjoy this playstyle a lot more than I did, but personally, it just felt off.

If you are interested in checking out the decklist, here is a link to it!

Overall I was very happy with how this deck played out, with the two main concerns I had with it being mentioned earlier. As for trying the deck yourself, Thassa is still going to stay in standard and probably will still be strong, but she is losing some of the best tools she has access to in the forms of Agent of Treachery, Spark Double, Dream Eater, et cetera. There were plenty of cards that did effectively the same as others it just will not be as good as it is now unless Zendikar Rising brings along any strong ETB effects.

That is all I have to say about this deck besides that it was pretty fun at first, but playtesting started to feel like a bit of a slog. Anyway, I am stoked for Zendikar Rising’s spoiler season starting. I first started playing back when it was in standard and so I have a ton of nostalgia for the set since Battle for Zendikar never really captured the feel that Zendikar and Worldwake had. Anyway, I can go on for a long time about how much I love the plane but that is all for this week’s article, hope you all enjoyed it. If there are any commanders you want me to take a swing at, make sure to let me know in the comments below, and like always, good luck brewing!