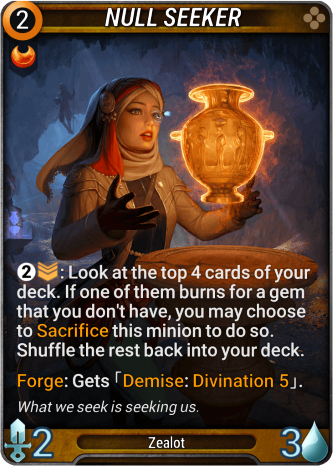 Look at the top {0} cards of your deck. If one of them burns for a gem that you don't have, you may choose to \1Sacrifice\0 this minion to do so. Shuffle the rest back into your deck.

What we seek is seeking us.

The aide stifled a sneeze as he acclimated to the astringent air of the imperial chambers. "The Dreni government must have a reason to host the competition, and the consensus seems to be that they're searching for something." The empress appeared to be listening, but her faraway expression always gave the impression that she was thinking about something else. "They always are," she said as another glassy cable snaked down and connected to the back of her golem's head. "I've heard enough. Go, and pull the Null Seekers off their little relic hunt."