Welcome to In The Frame, a format that focuses on a topic that's near and dear to the heart of many card game enthusiasts: Card Art!

No matter what forums or threads you're visiting, there are always people that show their appreciation for these little pictures. Whether it be through simple comments on reveals, some custom cards, or even some self-made pieces - players really can't get enough of them, and that's to no one's surprise! These little artworks can convey so much: Character, storytelling, emotion, flavour... all of that in such tiny frames! I'm sure that a lot of you do one specific thing every time a new set gets released: Go through the gallery and look for your favourite art for this expansion. And if you're just like me, you might even craft that one, no matter if it's meta-defining or utter meme-y trash (looking at you, Temporus).

It always amazes me that, depending on the Game, hundreds of unique cards with distinct artwork are produced on a regular basis. Think about it: No matter if it's a big shiny meta breaker, a cool and fringe tech card, or a little will-never-be-seen-summoned token, they all have one thing in common: An artist has to create them.

And with that in mind, have you ever wondered how artists do that? How do they come up with their ideas? What goes into the creation of card art? And why do Artists portray characters the way they do? Well, if so, then I might have some good news for you!

In this new format, I want to find answers to questions like these and much more! I want to find out how an idea goes from a simple concept to a fully fleshed out art piece, what artists do to get inspired, and what techniques are used. Since I'm someone who is working on becoming an illustrator one day, I'd also like to share and test my bit of knowledge, and hopefully, learn something in the meantime. Maybe we can also start some discussions and even further the community's appreciation and interest in card art.

For this first article, I thought it would be fitting to start with something basic and check out, how an artist gets commissioned for work, and how an eventual creation process might look like.

Alright, where to begin?

How about we take a deeper look into how the TCG-Titan itself, Magic: The Gathering, handles its art? With almost 3 decades of experience in printing, more than 20.000 individual cards published, and thousands of articles and essays are written about, MTG has a lot to offer when it comes to teaching people how to design a card game and, of course, create artwork!

One of those helpful resources is written by Matt Cavotta, an Illustrator who worked for MTG. Back in 2007, Matt released an article called "How Art Thou?" for his column on the official MTG website. In it, he explains how Magic commissions its art with the help of an example:

"We're going to follow our fictitious friend, Dude Painter, from the point where Jeremy Jarvis, Magic's art director, has decided to assign him his first Magic illustration job. (This is not about how he contacted Jeremy or what he did to impress him—that's meat for another barbecue.)…

… Soon he will get an email from Jarvis that looks something like this:

Action: Show a female goblin rigger leaping off of the base of a rusty bronze monument to attack foes below. (See style guide for reference on riggers and monuments.)

Now he grabs his sketchbook and starts going to town…"

The author then goes on and talks a bit about how artists can add their own ideas. As it turns out, there are some ways one can put their creative spin on something AND keep in line with the instructions:

"…He says that Dude can rework it however he wants to focus on the weapon rather than the monument. "What's most important," Jarvis writes, "is not to include the monument, but to show a world in which the monument could exist."
This reminds me a lot of working on Ravnica. Artists did not absolutely have to put buildings in their art, but they did have to show a world that did not contradict a city setting."

Matt continues with other examples of what specific instructions commissions can have, and how the parties work together to come to the best possible result. If you want a little bit more detail from the article, check it out here!

Now that we know a bit more about how MTG handles its commissions, let's take a closer look at how an art piece might be created. The example I'll be showing you is a step-by-step process for the card Mangara, the Diplomat, created by Howard Lyon. 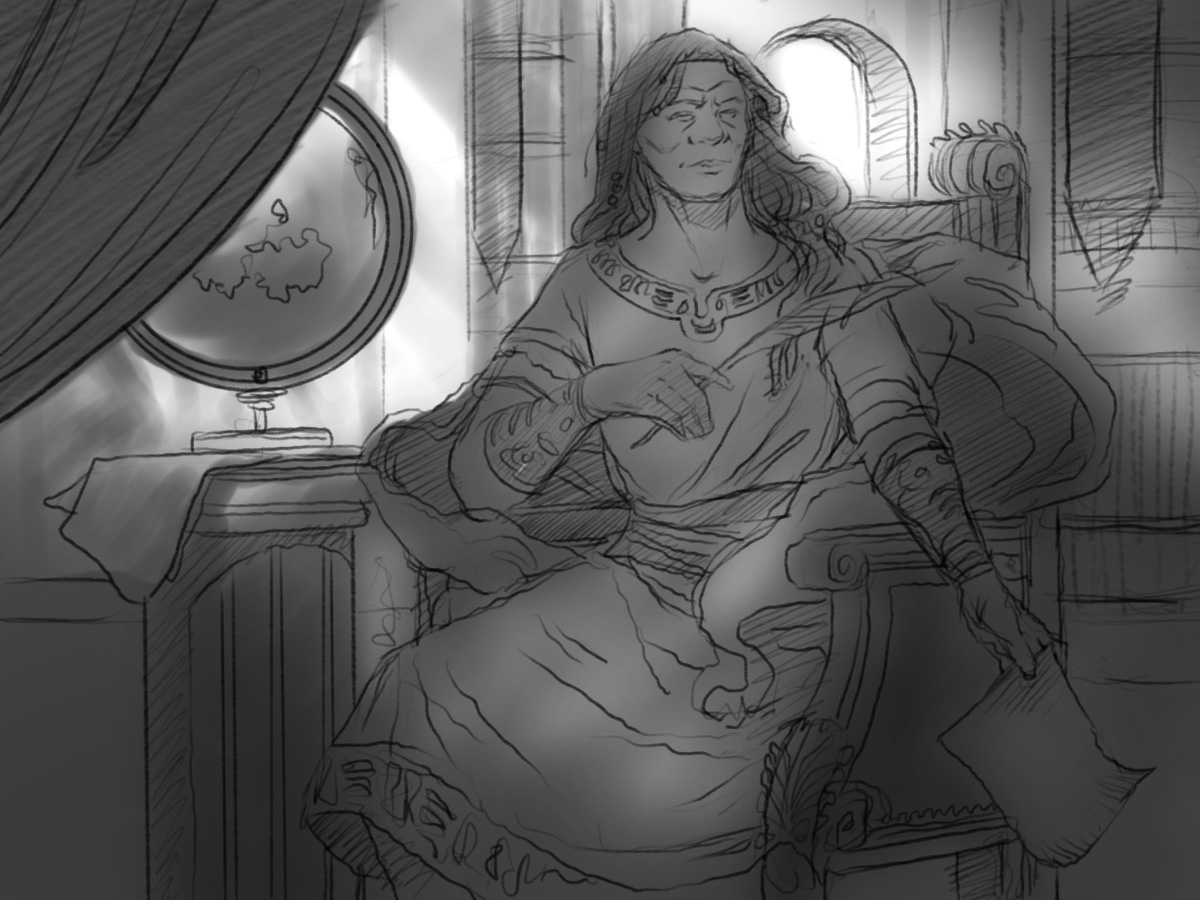 To start things off, Howard begins with a rough sketch in Procreate.
In this first step, he tries to give his idea some form and get a feel for the final composition. 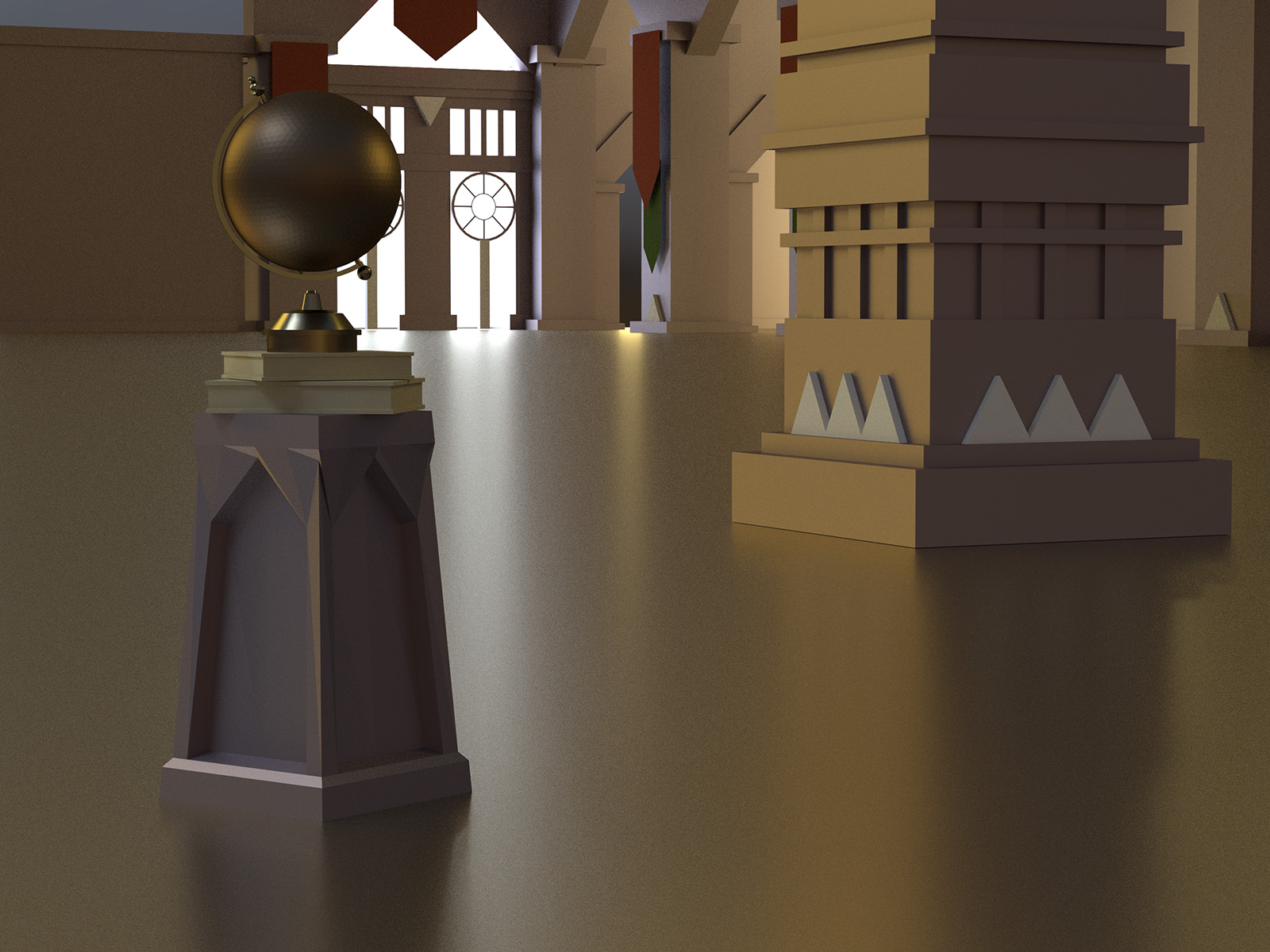 After getting approved, he then uses Blender to create a 3D-model of the scene.
That helps him to figure out how he wants to frame the picture and where he wants to set the camera. 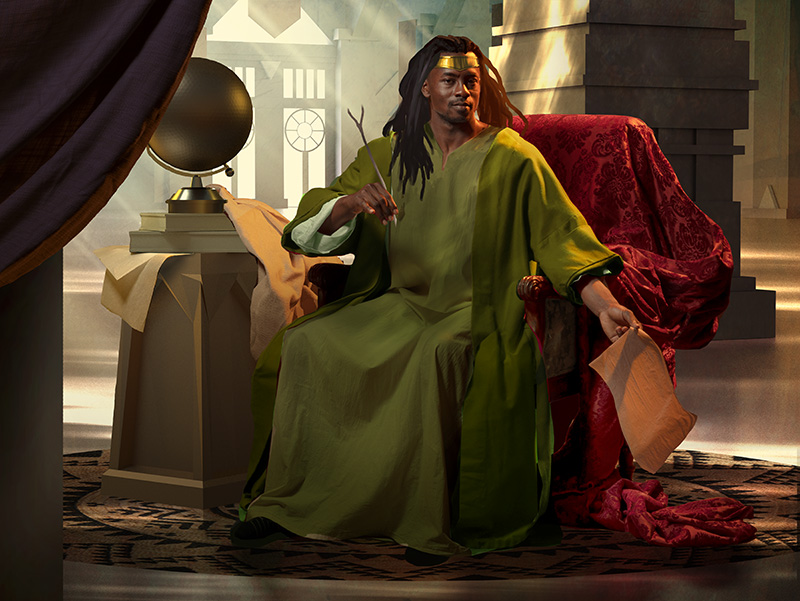 In the next step, Howard proceeds to place the model and the props for the scene.
With the help of Photoshop, he then adjusts the lighting, texture and
color temperature, to get closer to the mood he is aiming for. 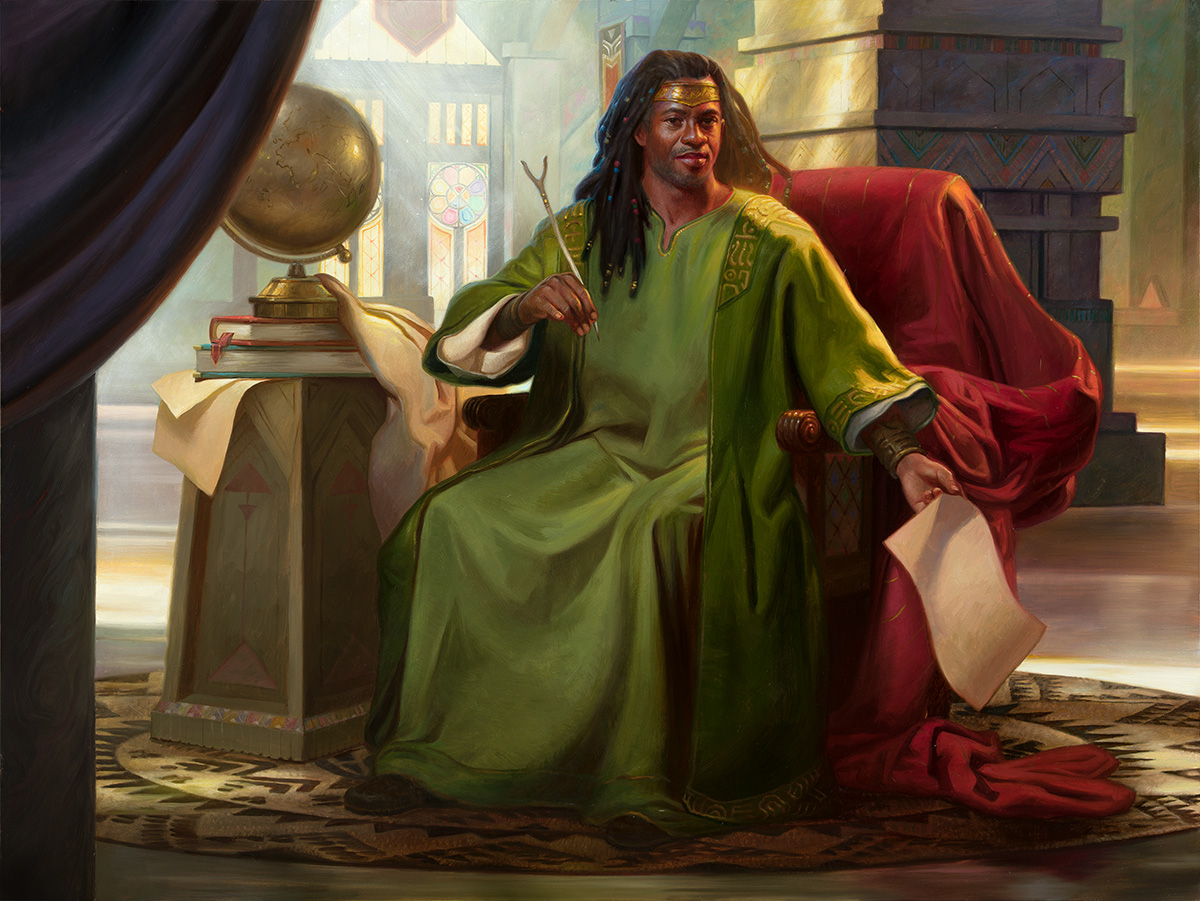 And then he just paints the picture. Draw the rest of the owl.

... Ok, you want to know HOW he paints the picture, right? Well, lucky for you! There's a video on his official YT channel, go check it out! (Source for pictures used above)

And with that, our first little instalment of In The Frame comes to a close. I hope reading this was as informative and fun for you, as it was for me researching and writing it!  I hope that I was able to pique your interest in the world of card art because as I said before, I want to deepen the community's appreciation and understanding of card art, by finding out what goes into the process of producing this kind of artwork.

The topic of card art is so vast, so we have much to still cover in the field that is worth writing about: Art direction, concept art, artists' experiences. We've also got plenty of high-quality fan art in the community that deserves to be highlighted.

Let me know what you'd like to see covered in the future here on In The Frame. Thanks for the read! 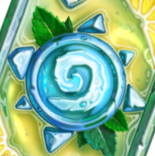