It's time to unveil the lost cards in the Wild format! In this series I'll be highlighting four cards - one from each rarity - that both look interesting enough to build a deck around and which have a history behind them. We're starting things off with Haunted Creeper. Originating from the Curse of Naxxramas adventure, this scary spider was a staple of the meta back in 2014 and 2015.

Secret Paladins could combo the death of the card intro triggering their Avenge secret, leading to a minion that was quite a pain the in arse to deal with early-game. Midrange Hunter saw similar success with buffs, granting greater power to it through Houndmaster, forcing opponents to attack into the taunt, triggering out spider friends.

Nowadays, we only see Haunted Creeper being played in Aggro Druid, it being a great card due to following it up with Mark of Y'Shaarj which helps get through your deck and cause an annoyance for your opponent. We can also make use of it in Zoolock, where you can either eat it with EVIL Genius to summon little spideys and have more Lackeys or some sort of Hobgoblin deck.

Check out this Druid deck from the wild open finals this year that made use of Haunted Creeper.

Want to check other decks utilizing this spider? If so, click here right away.

Who You Gonna Call? 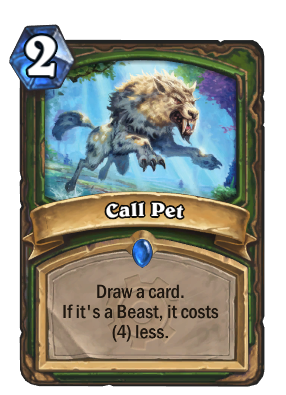 We never really saw Call Pet stomp out a spot in the meta back when it was released in Goblins vs Gnomes so it is time to change that! Drawing a card, discounting it by (4) if it is a Beast is insane for beast-heavy decks - which are much easier to build now thanks to the amount of good beasts we have available. The card is in a similar flavor to Scarlet Webweaver, which means we should try and build a deck containing plenty of high-cost beasts and throw them both in!

Other decks using Call Pet can be checked here. 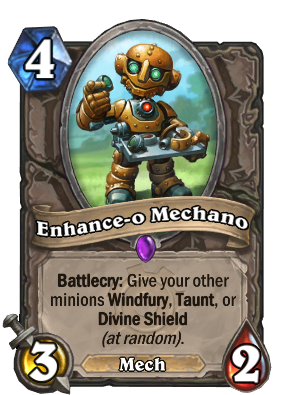 Historically speaking, this card was used a lot during the Goblins vs Gnomes era as a finisher within plenty of Mech archetypes. Thanks to the overwhelming power of the card, I was able to secure fun wins with Mech Rogue and Mech Warlock.

When The Boomsday Project released last year, I was sad and surprised to see the card not making a return into the field of mechs. Let's think outside the box and improve upon mechs with this card of a forgotten era by plugging it in to Mech Hunter.

Want to push further with this bot? If so, I advise you to check here.

Feed you to Master! Stalagg Crush You! 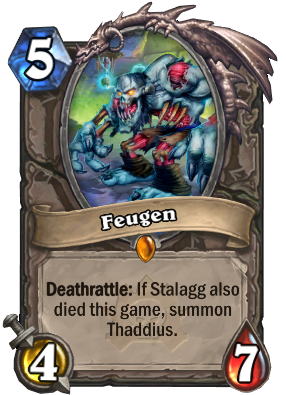 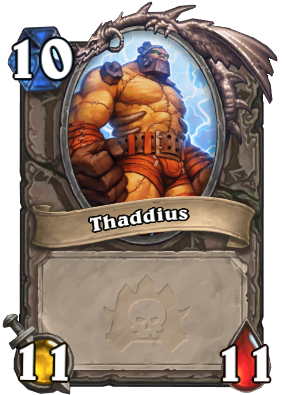 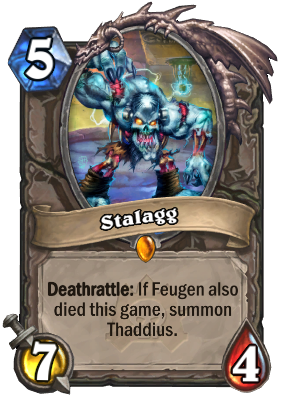 Before the era of the Whispers of the Old Gods, these brothers were used in Ancestral Spirit / Reincarnate Shaman decks to the delight of many players. Allowing one of the two brothers to die and casting Reincarnate on the other, Thaddius would appear and be a gigantic finisher. Casting Ancestral Spirit on one of the two legendaries would further the amount of Thaddius that one could control.

Much to my disappointment, we don't see Feugen and Stalagg anymore outside of RNG effects such as through Shallow Gravedigger. JAMONJAG came up with a great Deathrattle Priest deck that constantly annoys your opponent by summoning plenty of Thaddius.

Want to have a look at the power of Feugen and Stalagg brothers more? Then, check these decks out.

That's all today for The Forgotten Wilds of Hearthstone. Let us know in the comments some of the cards you feel don't get the time of day anymore and until next time, peace out and stay tuned for more!