We've got an update on Hearthstone's standard meta thanks to the fine folks at HSReplay.net. Like the stats bomb that was dropped just over a week ago, we've got fresh details on how the meta is doing after the nerfs and the results may surprise you. Any data discussed in this article is from Diamond to Legend and from the point of the patch coming out so things are still skewed. If you are looking for crafting advice, let the meta settle into the nerfs a bit first!

Mages - Gone But Not Forgotten

The doubling of Deck of Lunacy's mana cost turn the card into dust and moved players away from the class with it losing 19.7% popularity. Overall class winrate is also down to sub-50%, coming in at 47.2%, which also isn't a great look for the class but it certainly is not over yet. Our frosty friends should stick around, but not at the oppressive numbers we saw before.

So, what are Mages playing now? Well, it turns out, people are still playing with No Minion Mage! The winrate is down to just over 50% so you'll have to have some more luck on your side if you want to have really crazy winrates, but it doesn't look like the deck is going anywhere right now. That's how you know the nerfs were fair.

Oh, Paladin. They consistently owned the ladder last year with their Libram plays and that power stayed put with the launch of the Year of the Gryphon and Forged in the Barrens. We went into the new expansion knowing Paladin was going to be strong, but the strength we saw them was something special this time around. Blizzard agreed considering their Pen Flinger to the face days are over.

With the latest meta data from HSReplay.net, we see they don't really change much in overall winrate with a solid 54.7%, but popularity sure took a hard turn. Down by almost half, only 11.4% of decks are rocking our Holy bro, Uther, which is a great thing for player sentiment because we can all move on to complain about fighting a million Warlocks instead.

So, what should you play if you want to get in some Paladin wins? Don't be surprised when I tell you Secret Paladin and Libram Paladin are both still solid. Hopefully they don't remain oppressive, though Blizzard will be evaluating that after the next Masters Tour event so we could see nerfs to the class, or buffs elsewhere.

Hunters - The New King of the Jungle?

We've got a rising star here in Un'Goro- no, there aren't that kind of jungle things going on though we do have a few beasts in our sights.

Hunters have risen to the top post-nerfs with an incredible overall winrate of 57.1%! They weren't in a bad place before the nerfs but with some of the most oppressive nonsense out of the way, it has given them room to grow. Popularity is also up with the increased winrates, now sitting at a plump 14.9%.

If you want to join the pack, we're playing Face Hunter!

Warlocks - What the [email protected]#$?

While it isn't the absolute best deck, though it is solid, Control Warlock and its Tickatus nonsense is on the rise with its population more than doubling up to 18.7% and becoming the most popular class on the ladder. I wouldn't worry too much about this though because this might be EXACTLY what we want to have happen if we want to see Blizzard make adjustments to the card.

You see, last week during Dean Ayala's community Q&A, Dean addressed the card saying that they would be taking another look at it after the nerfs went out and that it isn't a very problematic card because those types of decks are always a "question of population". Well, if everyone is playing this version of Warlock, and community sentiment on the card takes a further dive, perhaps we'll see some fair changes.

Here are the full updated stats on winrate and popularity in the Standard meta. Keep in mind that this uses a very small snapshot of data so the results can be skewed and should not be taken as an absolute truth of where the meta is going to go. With fresh data after a set of major card changes, nothing is going to be solved on day 1. 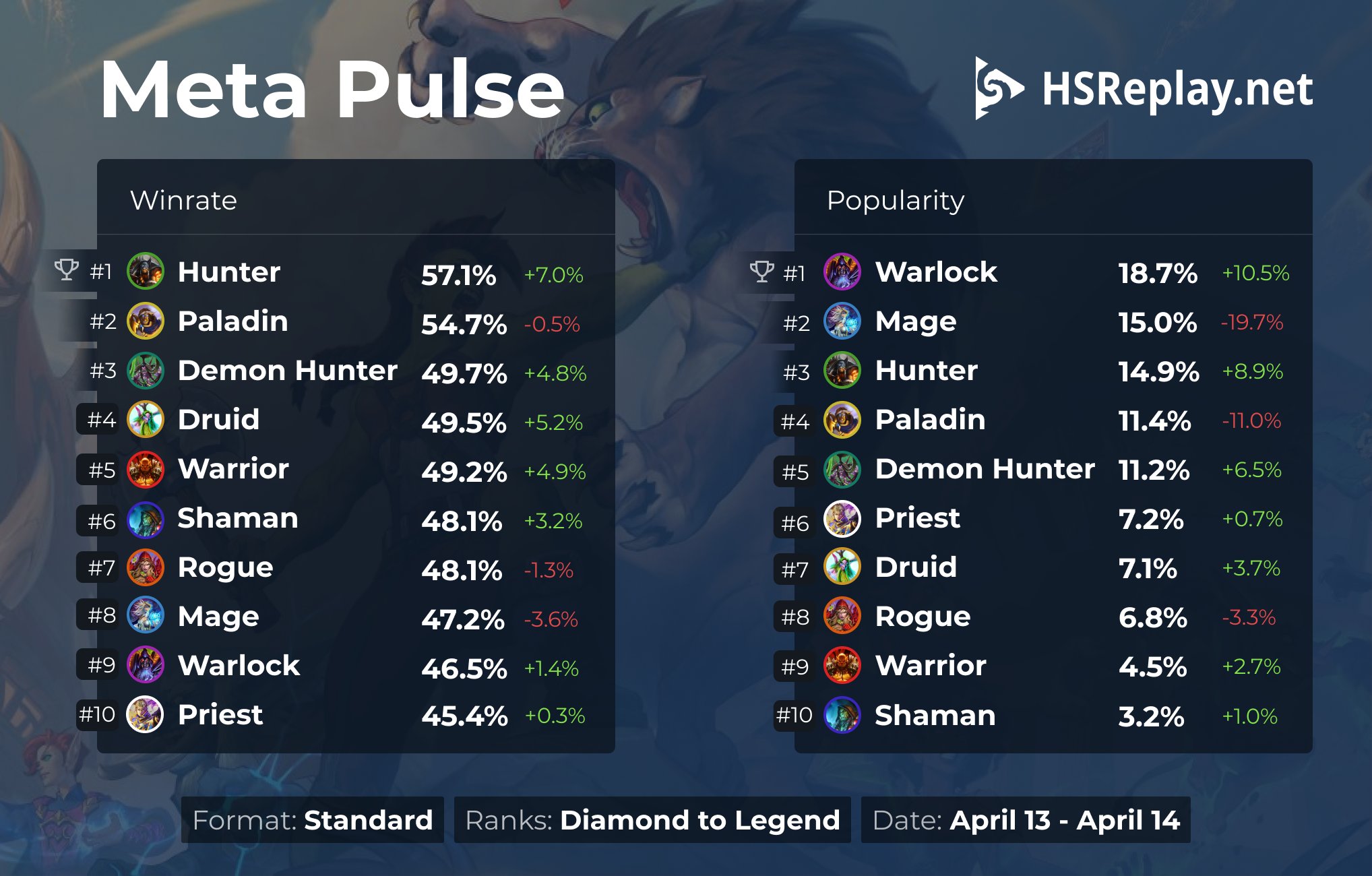 How are you feeling about the meta so far after the card changes went through? Let us know in the comments below!