It’s finally time for Demon Hunter’s first quest and they certainly were given an interesting one to say the least. The quest wants the player to draw cards, and the payoff makes drawing cards better, which is a bit awkward given that by the time the quest is nearing completion, there is a solid chance one cannot get that much value out of it. However it is not all doom and gloom yet, as Demon Hunter does have a variety of tools in their arsenal to fudge with the numbers a bit, most specifically Glide which completes whatever the current step is, as well as Soul Fragments, which give an extra draw as well as padding one's life total a bit. Are both of these enough to make a quest all about drawing cards worth it? Let’s find out! 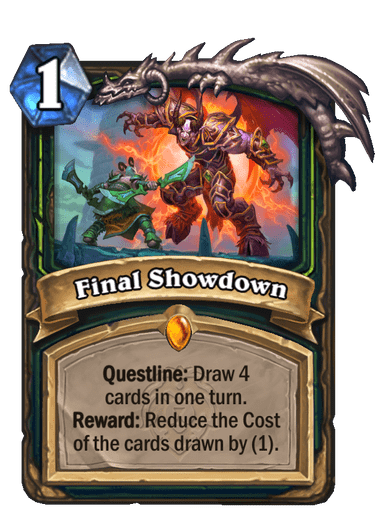 Before jumping into the breakdown, I would first like to give the conditions behind a lot of the calculations you will see in this article and almost all the future ones. In every scenario, I assume the player goes first and prioritizes completing the questline with the hypothetical opponent not applying much pressure. For this specific questline, I assume the opponent has targets for Soul Shear.

Before jumping into the math and data, first lets talk about all the moving parts to this quest. First and foremost, the method used to calculate almost all of the statistics in the prior parts of this mini-series relies on a constant sample size. This sample size would often end up being the way to tell when a turn has passed, as most classes do not have access to large amounts of card draw and thus, only draw when they start a new turn. This is why drawing a card would speed up the completion time by a turn for every step for almost all the other questlines. This same logic cannot be applied to this questline simply because the goal itself is to draw cards, not to play cards. This means that there is significantly more calculations that need to be done, as playing a draw 1 spell is completely different from playing a draw 2 spell, or even a 'draw 1 specific card' spell. When you factor that in each of these branching paths, more often than not there are several other paths depending on the next type of draw, it gets incredibly complicated in a incredibly quickly. When trying to first tackle this questline, I calculated there to be around 100+ different lines for just the first step of the quest, with each latter step having to build on the past ones. In addition, these calculations would become even more complicated when considering another important part of the deck, that being Soul Fragments. When you draw into one, it effectively counts as 2 draws for the sake of the quest. The chances to draw into a Soul Fragment needs to be accounted for all future draws, as hitting one can make or break a step completion. On top of this, we also need to account for the questline rewards, which can expedite the process by letting you cast cards earlier than expected. The last component that needs to be accounted for is with Demon Hunter's signature mechanic, Outcast. While some cards do not care much about having that trigger, such as Glide, an outcasted Spectral Sight or Skull of Gul'dan is a completely different card which needs to be accounted for. While controlling Outcasts are easy when you can visibly see them in your hand, the same is not true when you are looking purely at numbers and calculations. 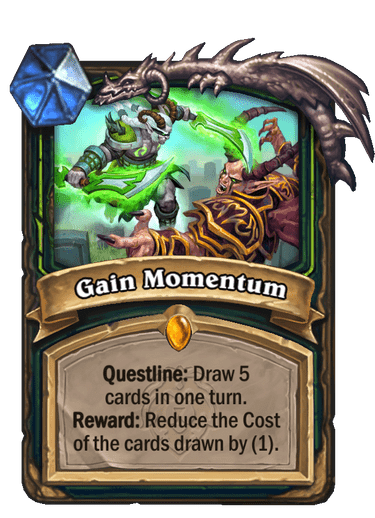 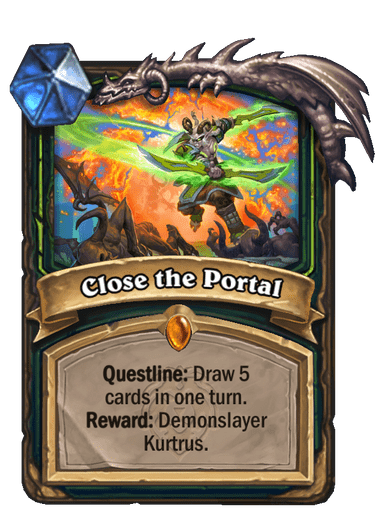 To put it simply, the math behind calculating the average completion turn is incredibly messy and if I were to get any actual numbers via all the calculations, I would not feel confident in them due to all the moving pieces. However, that did not stop me from proxying the entire decklist in paper and playtesting it for 30 games to be able to determine an average, which you can find all the data here. Using this method, the average times to complete each step were on turns 4.13, 5.53, and 6.77, leaving an average of 14.233 cards left in the deck. It should be noted that for the second and final step, there was a fairly big outlier, where the quest was completed on turn 10 and 11 respectively. Replacing this outlier with a typical game's outcome reduces the average turn of completion to turns 5.367 and 6.367. Something else to note is that after you complete the first step, the subsequent ones become significantly easier due to not only the discount, but also the wider range of choices and access to more mana. 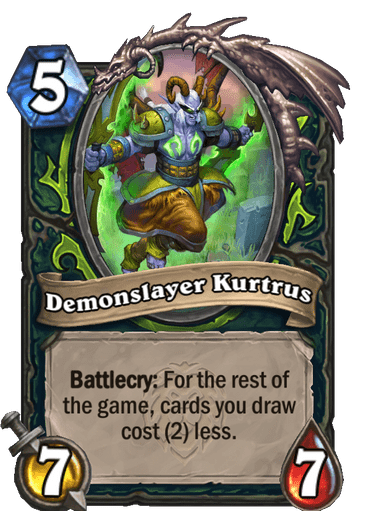 Now that we’ve gotten through all that mess, time to see the reward. Demonslayer Kurtrus is definitely an interesting payoff to say the least. The ability to play everything you topdeck for 2 less mana seems like a slow value tool until you realize that the entire purpose of your deck is to draw anyway, resulting in basically being able to fatigue yourself in 1-2 turns depending on how well you draw. The issue arises in that drawing your entire deck is not going to win the game most of the time, at least with how I have built the deck. Cards like Lion's Frenzy and Irebound Brute are crazy strong payoff cards in their own right, and hopefully over the course of the game you’ll be able to chip the opponent down and finally use Lion's Frenzy as a crazy finisher. Kurtrus absolutely fits the bill of powerful game-winning quest reward, I am just not sure how realistic it is to capitalize on it to its fullest.

Since I actually got the chance to play around with this list, I can also give some suggestions if any of you want to play it yourself. The biggest issue during testing is how hard it is to Outcast on the right, and due to cards like Soulciologist Malicia and Soulshard Lapidary, you can lose so much time just waiting to clear your hand of garbage. The other main tip is to make 'packages' for specific cards. Double Jump always hitting either Spectral Sight, Skull of Gul'dan, and Glide is powerful enough to justify not running Crimson Sigil Runner. Another great example is with Felgorger and Chaos Strike. The main reason why I have not changed the list is mainly due to not wanting to retake good portions of the data, as the process was rather time consuming.

What are your thoughts on the Demon Hunter Questline? I would absolutely be lying to say that I did not enjoy some of the playtesting, as the feeling of churning through your deck and finishing the quest early is amazing. However, the amount of moving parts makes turns difficult as you have to account for whether you can finish the step this turn, or if you need to wait some more. There is also the whole issue with actually finishing the game. Cheesing out early Irebound Brutes and hitting the opponent for a bunch with Lion's Frenzy are both great, but beyond that there just is not a 'big goal' you are reaching which might be an issue. All this said, if you open this questline, definitely give it a go!

With Demon Hunter being the last questline covered, I hope you all enjoyed this mini-series! I had a good time coming up with theorycrafts and talking about them with all of you, and hopefully some of my math was able to help you with your own decks. Until next time!