Welcome to Stormwind City adventurer, may your stay be most pleasant. There are merchants and taverns abound, just beware of an occasional freebooter. You must be fairly exhausted, travelling all the way from The Barrens. Make sure to pick up all your old belongings before you venture out in search of some new loot.

The Barrens Rewards Track is in our rear mirror, the Stormwind Rewards Track awaiting right ahead. Aside from a few cosmetic differences, they both happen to share almost the exact same patterns. And so there is no better time for looking back and drawing a quick comparison. Or several.

We Might Have Forged a Good Deal of Experience and Gold

Your personal view of the previous Rewards Track - as well as the brand new one - is bound to vary depending on a few factors. Purchasing the Tavern Pass for the bonus experience and rewards or staying with the base version; diligently pursuing Gameplay XP Achievements for that additional gain or not bothering much at all; never missing any daily/weekly quests or letting a handful slip through the cracks; finally, the amount of total time spent on playing the game.

Personally, I had a pretty good experience with how everything has panned out, for the most part - even if I wasn't a big fan of every single solution (Golden Uncraftable cards, begone!). 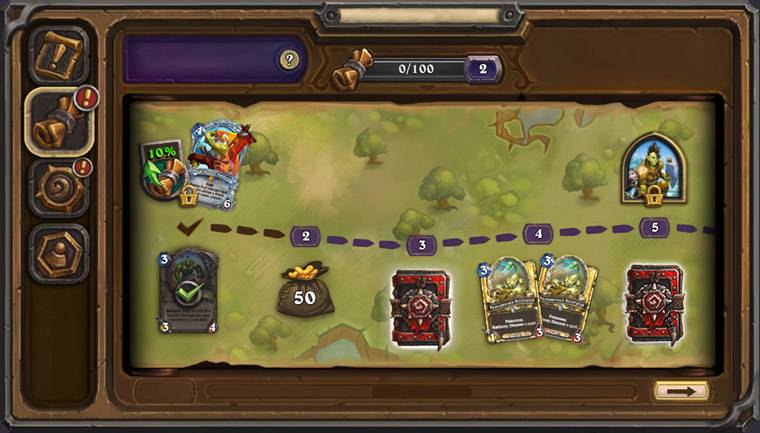 The problem with Golden Uncraftables is them taking up a precious spot that could be much better spent on gold, a pack, or a free ticket pass for Arena/Duels. If you don't care about the pretty animations and prefer your rewards material, then each Common earned in this way is a substantial loss. Open a few dozen expansion packs and you will own all cards of said rarity anyway.

Golden Rares are slightly more useful, but only under the condition that you can grab relevant cards from the track before you happen to get them from your packs. Then it does indeed reduce the amount needed for a full Rare collection. Otherwise we just end up with extra redundant copies only afterwards. And yes, we could always disenchant these normal versions, but the dust gain is rather pitiful.

Golden Epic "freebies" are the most annoying, as they are buried fairly deep. If you got your Primordial Protector copies from the Barrens packs rather than its Rewards Track, you essentialy lost out on a couple of free Epics (earning all cards from this rarity does require quite a lot of effort/luck in terms of the number of needed packs/dust). Disenchanting them for 100 dust feels bad when it takes 400 to craft another Epic. For me it was a small cause of celebration whenever I "dodged" "the PPs" and found a different Epic card. I didn't even grab the random Epic reward from the track well until after I had collected these two by level 75.

This isn't how a feel-good Rewards Track experience should work, in my mind. Having to wait and bide your time, hope that random luck goes your way. It may not bother some of the more casual players, yet the life of a min-maxer is never easy.

One potential saving grace here would be if Hearthstone eventually flipped the switch and allowed Golden card rewards from preceding Rewards Tracks to become disenchantable (thus also letting newer players to craft Golden copies of those if they desire so). Until then, I know I'm going to scoff at such forced "rewards". Just give me other stuff.

So yes... besides this whole weird Golden Uncraftables system - packs were good (even Phoenix ones to round up the collection), Tavern Tickets even better, gold acceptable (even if I believe the initial 100 levels could still offer us slightly more).

Enjoy Your Stay in Stormwind City

Looking forward, it's more or less the same system. The good becomes slightly better (as we will be getting Standard Packs instead of Year of the Phoenix type; you will still find the latter in your Tavern Brawls). Unfortunately, some of the bad remains with the whole arbitrary Golden Uncraftable "gifts". It would also be great if at least a few more of the utterly boring 50-75 gold rewards turned into a Tavern Ticket (encourage people to visit Arena or Duels a little more often), or at least a pack. 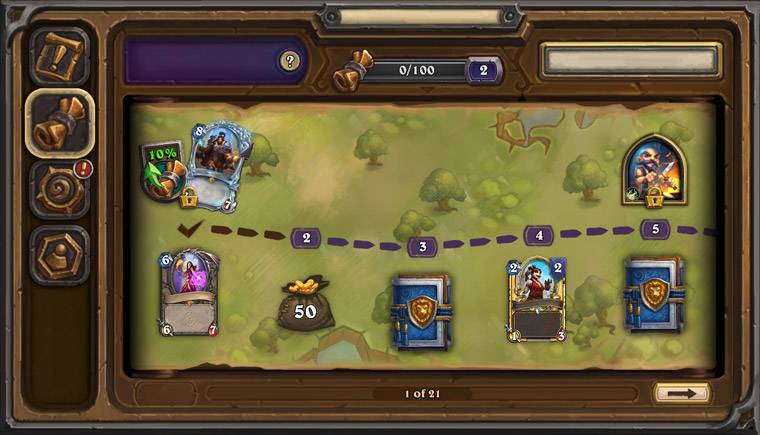 Fortunately, the lazy ones among us don't have to worry about forgetting to claim anything:

When the Rewards Track refreshes when United in Stormwind launches, all players will automatically be granted any unclaimed rewards on both the free track and the Tavern Pass track (if purchased), and a completely new Rewards Track of unlockable loot will take its place.

Psst, they could at least change some of that Rewards Track's cosmetic background. I vote for a host of different landscapes! Or maybe somebody has a better idea?

That is the big question (for some of us). Forged in the Barrens managed to tempt me into purchasing that deal - not just because of the cool concept of Diamond cards with Blademaster Samuro leading the way and essentially counting as another "free" Legendary, but largely because of the vast improvements being made at the time to the Rewards Track itself - essentially turning into this modern version as we know it. It wasn't that long ago when Darkmoon Faire's initial model turned out to be an utter failure. In the wake of beneficial updates, it all felt worth supporting.

The Forged in the Barrens Tavern Pass will expire with the launch of United in Stormwind and a new Tavern Pass will be made available for purchase—offering a host of brand-new cosmetic rewards and XP boosts.

However, this time around we remain in the known territory. It's fine, just nothing hugely noteworthy. Varian, King of Stormwind is no Blademaster Samuro in terms of power level impact, much as I like the character (Orc 'Samurai' just sounds cooler, okay?). Yrel and Tamsin skins look alright, the rest isn't necessarily my cup of tea. Bonus experience is the greatest boon, but eh... all signs point to sitting this one out in my case. That said, the lovely Diamond Varian with his trusted swords is trying his best to change my mind.

Whatever you decide for yourselves, it's best to know from day 1 and follow through - there is no recovering any bonus XP boost that is inevitably lost with later purchases.

For reference and for tracking one's progress: I tend to play both on Europe and Americas servers, almost always reaching at least Diamond 5 in Standard and aiming to clear up dailies and weeklies. I generally dislike ladder climbing (tournament play is so much more interesting), the main temptation is just the rewards. My final results this time around:

Now, I'm also pretty sure I have missed out on a few dailies (and maybe even a couple weeklies) here and there - it does get chaotic trying to keep track of both regions whenever time isn't on one's side. Quests can be occasionally frustrating as well, as they still partially follow an outdated model (Sinti's excellent rhetoric on the subject from half a year ago still remains very true).

All the cosmetic skins also cost a fair chunk of gold if one's will wasn't iron strong! And I might have prioritized Arena/Duels runs plus some achievements (the whole snafu there did not help things) on the home turf that is Europe - which matters especially for Duels, with a far more extensive Wild collection from the years of play. Overall, I wouldn't say I ever felt I had to grind much - no afking Battlegrounds or Brawls for tiny amounts of experience, not playing much on some weeks beyond completing quests in the most efficient manner possible.

How about the rest of you?

You Are (Probably) Prepared

If you have pre-purchased or won any bundles and have already been opening your Stormwind packs through private Fireside Gatherings, you might also be aware that this time around Hearthstone team put a solution in place for your normal and golden variants of Varian, King of Stormwind, and for the golden version of Lady Prestor (as the regular is free and uncraftable) well ahead of time. It's the same one we eventually saw being used for the Barrens cards. This grace period should last about a week, so don't wait too long (the answer is - as with all refunds - yes, you should totally disenchant for the full dust value if you get to be this lucky).

Not a bug. Similar situation to Mankrik and Samuro during Barrens launch. Since they're on the Reward Track, but could be opened in packs prior to being claimed, Katrana and Varian start out refundable.

Remember about this little trick (but for Golden cards to properly show up while in the "crafting mode", you may have to tick a separate box) from the most recent patch:

And there is also that little matter of holding onto your quests or completing them. We've covered this particular dilemma before. It all depends on where you are at with it. Using myself as an example: 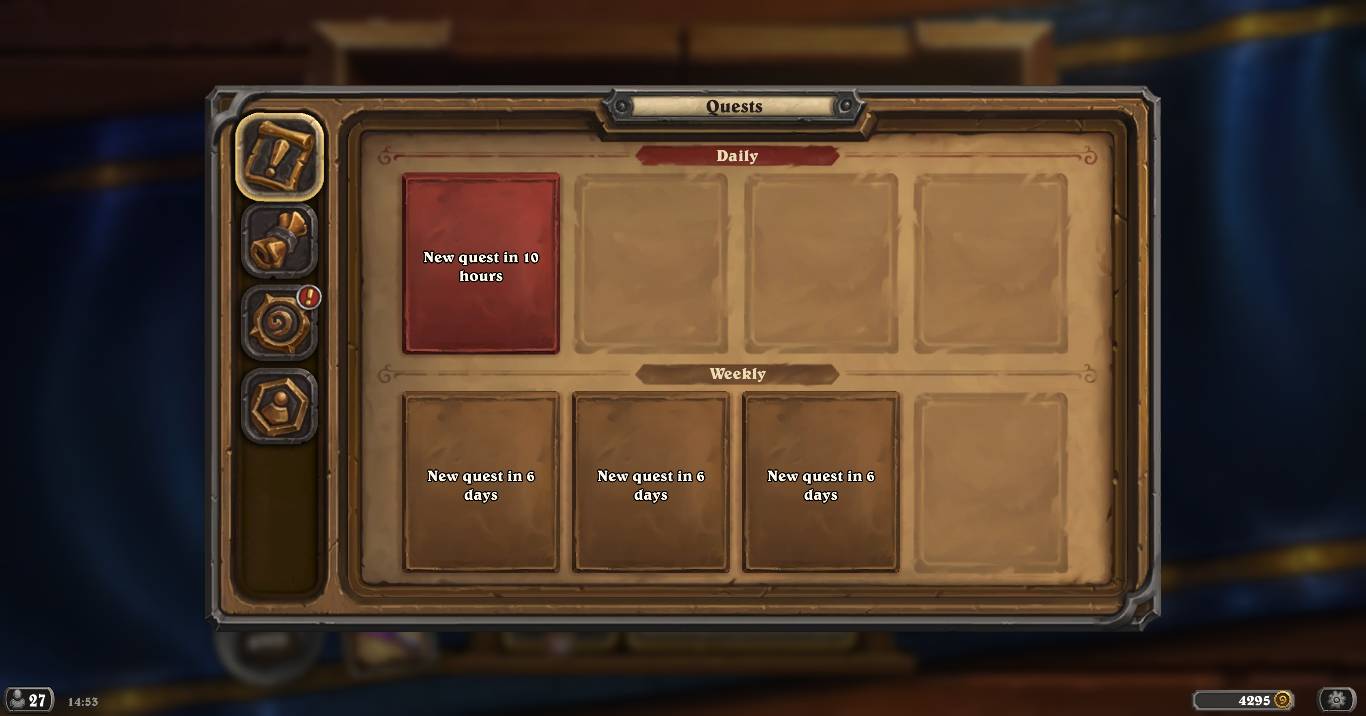 All cleaned up on Europe, since it were my final hours with the Tavern Pass and 20% XP bonus. May not be nearly as spoiled for the Stormwind Rewards Track. 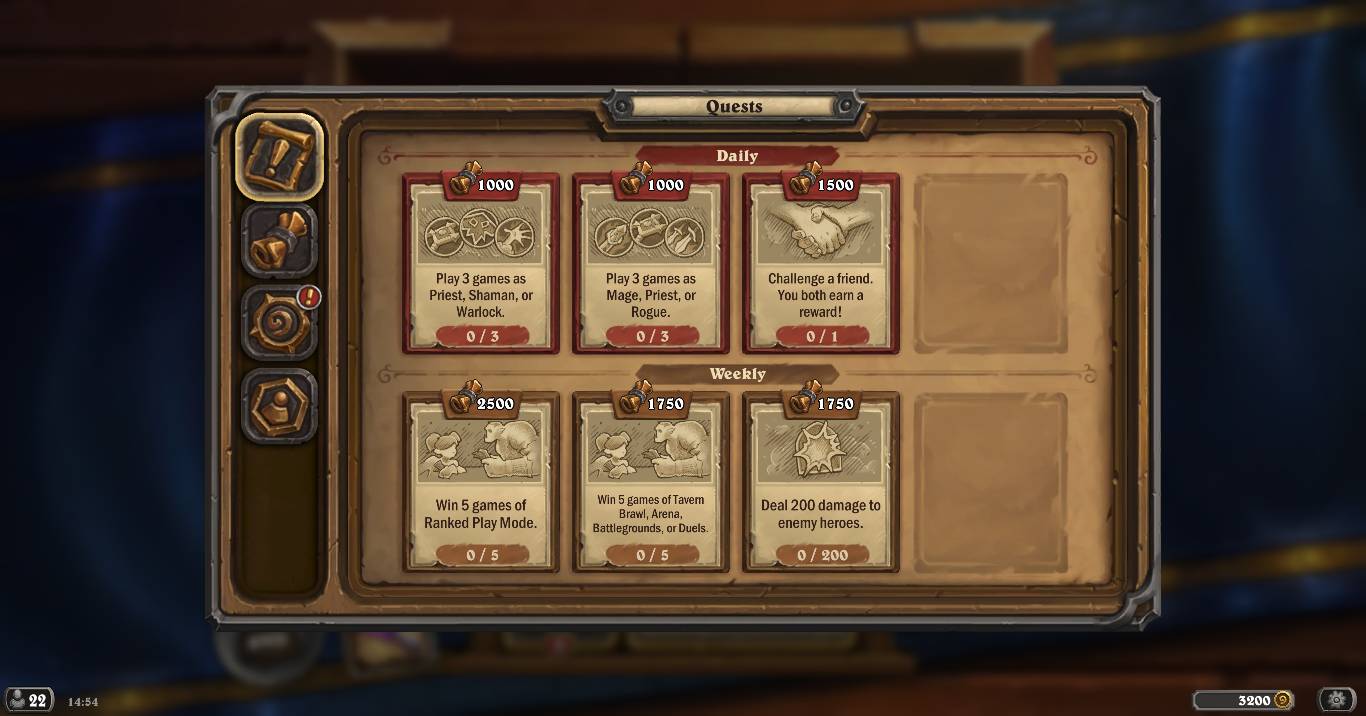 Then on Americas, saving up everything there is for that little headstart in the coming Stormwind meta. The chunks of 50 gold from the previous track stopped having any appeal, and there was no bonus XP to be milked anyway.

Has anyone else been preparing in a similar fashion (I would guess so)?

All That Is Left

If you care about Darkbishop Benedictus in his Diamond form, or the cosmetic coin, remember about this handy note:

There was also this tiny qualify of life change in the recent patch:

Last but not least, it's worth noting that some of our community members have been documenting their Rewards Track progress and impressions on the forums from the very start: here is a link to all the Barrens journeys. Maybe some of you will want to join in for the Stormwind path.

Whatever your focus, good luck getting the most out of it!

Happy with your Rewards Track progress for Forged in the Barrens? Regret buying or not buying the Tavern Pass? Think you could've done anything bettter or differently, or maybe you also found it problematic to do all quests regularly? We would love to hear your thoughts on the topic!