As we've reported shortly after the pre-expansion patch 22.0 went live, parts of the Honor system intended to represent the whole faction war between the Alliance and the Horde - that was only meant to be activated once Fractured in Alterac Valley made its December 7 debut - accidentally started trickling into the game. Players were able to see their thematic faction icons (based on the earlier choice between Vanndar Stormpike or Drek'Thar) while playing, earn Honorable Kills upon winning games, or get smaller bits of Honor when losing. There were even golden card rewards silently being added to our collections, we just couldn't see the exact ranks or any notifications associated with them.

Since none of this was exactly intended, the Hearthstone team needed to take some time and confer about how to best proceed. In the end, we had been informed to expect an official start of Battle for Alterac Valley as soon as possible. All of these missing support pieces have now actually arrived (as of earlier today), and everyone who has had a chance to log into the game might've noticed the new Legendary Questline now being displayed correctly. This has definitely been the right call on the part of the developers.

For the first time ever, we actually have a Legendary Questline taking up the 4th reserved slot along our other Weekly quests, instead of that special Daily Quest slot that various in-game events made use of before. This actually makes a lot of sense if you consider that the event is meant to last for the entire lifespan of the upcoming expansion. We'll need that 4th Daily Quest slot for various seasonal events we know from the past and which are expected to take place meanwhile (Winter Veil, Lunar Year, anything else?).

Upon further inspection, it's possible to view some of the early ranks (the rest becomes visible as players progress throughout the chain and complete the steps) that can be earned for playing games and gathering Honor. These naturally differ per your faction of choice: 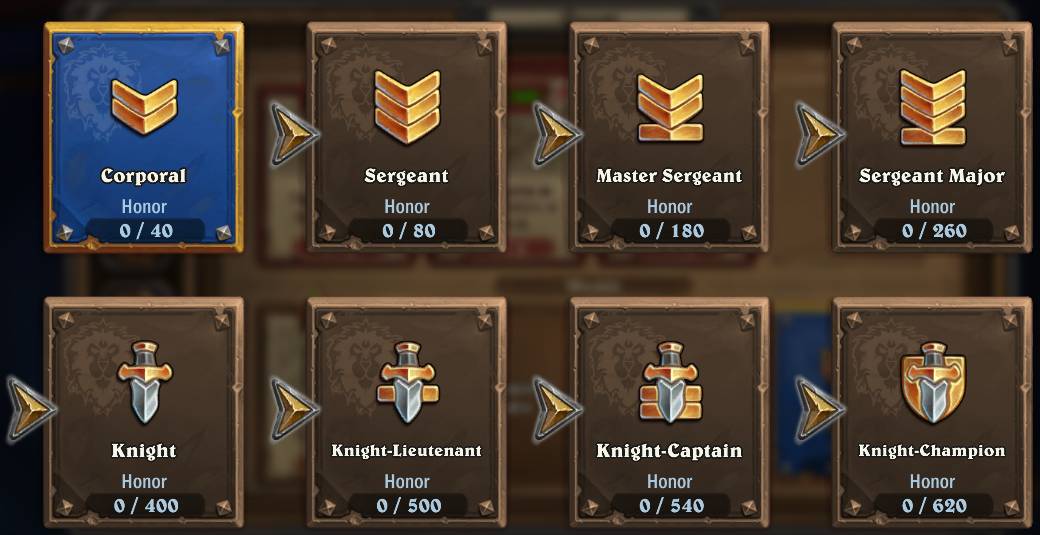 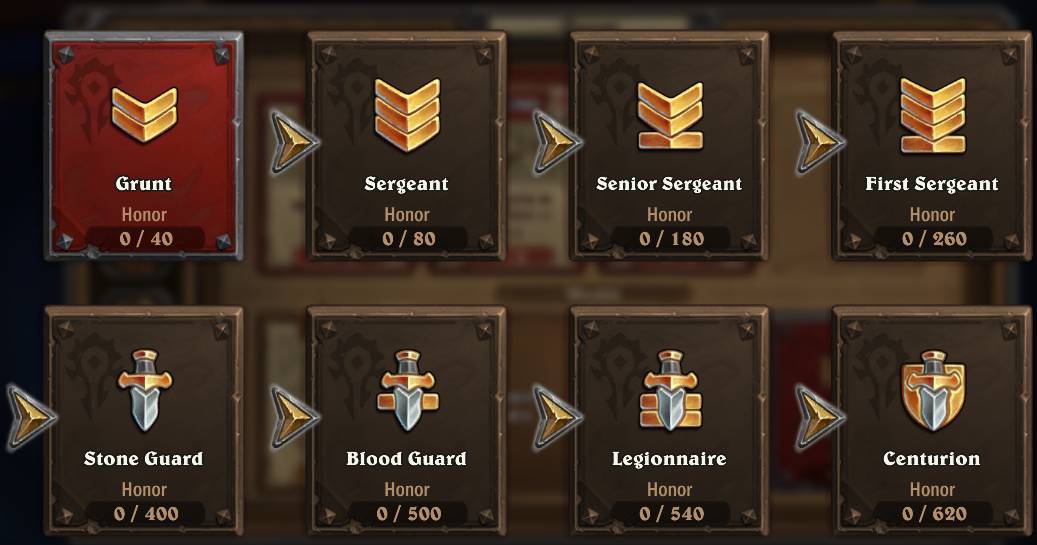 The ranks themselves do not have any actual bearing in the game, and are there mainly for flavor purposes. It's the exact mirror system as the one that was being used for PvP progression in classic World of Warcraft. Over there, each rank granted you the associated title and some perks, and they actually required a LOT more Honor to get. Another nice nostalgic callback for those who remember those good old MMO days, where a single Alterac Valley battleground could last for multiple hours. I certainly do myself, having grinded said Honor system all the way to the very top all those years ago. We are lucky that its implementation in Hearthstone does not precisely reflect that experience, or we would be looking at thousands of games to get there (instead of the required few hundred, we did all the math here).

Yeah, same honor amount. We just showed the rank because it was a fun flavor and interesting, and callback to the WoW Honor system, which a lot of this is inspired by.

And yes, you might notice that the Honor amount required to achieve each subsequent rank is somewhat... inconsistent. The total difference between ranks 2 and 3 or ranks 5 and 6 is 100 Honor points, for example, but between rank 6 and 7 there is only an increase of 40 Honor needed. Which is actually good and ends up working in player's favor, considering that each separate step begins anew from 0.

What is not so good is the fact that Honor gains do NOT roll over to the next level. So if you find yourself sitting at, say, 490 out of required 500 Honor and earn a Honorable Kill worth 40 points, you will still start the next rank at 0/540 instead of expected 30/540. That can be slightly annoying, but it's also a fairly minor loss. It's likely just due to implementing this as a part of the Quests system, with all its limitations.

Keep in mind that these "Honorable Kills" gained from winning in PvP modes have nothing to do with the Honorable Kill keyword that is set to come with Fractured in Alterac Valley (and only affects minions). The naming overlap can be slightly confusing.

The total Honor progress is still being reflected within the Gameplay Achievements section for Alterac Valley, where are all of the new XP Achievements are also already available (as Stormwind ones no longer grant any bonus XP). You can even earn yourself another Hero skin this way, from the same pool as the one being used for the Rewards Track levels. 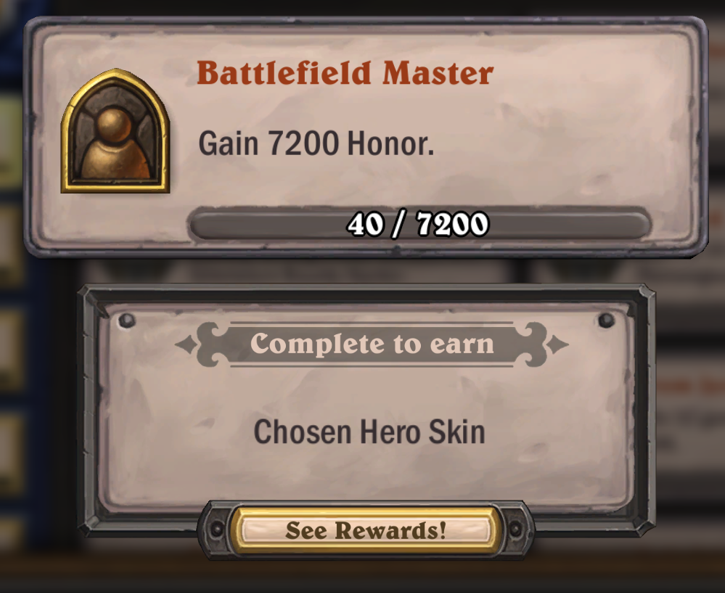 We've talked about this before, but in case anyone needs a quick refresher - you always get to see in-game who belongs to which faction, and the Honor gains follow a very simple pattern:

During the event, everyone will earn Honor points by playing games in Constructed or the so called 'Traditional Hearthstone' (Standard, Wild, Classic), with Arena and Duels joining the fray as well. No love for Tavern Brawls, clearly that's a neutral ground; while Casual is... well, too casual. And apparently the implementation somehow isn't there for Mercenaries or Battlegrounds.

There is currently an awkward situation where your faction icon ends up obscuring your current win/loss count during Duels and Arena games. It's on the record:

We are aware that the new rank displays tied to the Honor system and event block Duels and Arena win-loss records while in-game. The team has a solution that allows those records to be displayed alongside the Honor system displays. That solution is planned to go out in a hotfix later this week.

All the Golden Uncraftable rewards that we can collect ahead of the expansion's launch (and of course all the way during it) should respect duplicate protection rules and not show up during your initial pack openings until you own all the other Rare cards from Fractured in Alterac Valley. Plus there is also that juicy Legendary at the end. And no, they cannot be included in any playable decks until the full set launch on December 7. Both Horde and Alliance get the same perks, just in a different order:

Nope, you probably won't see (at least for now) any of that Honor you might've gathered by playing for ~1.5 days since the release of patch 22.0 and all the way until the Legendary Questline was actually activated in game. The Honor Ranks system wasn't officially enabled to keep track of everything at the time, although your total Honor achievement does remember the exact amount you've collected from the very start. While the golden cards were correctly being added to your collection, you may still see the actual notifications popping up as you go to inform what you (were supposed to) get. That technically shouldn't result in anyone ending up with 4 copies. 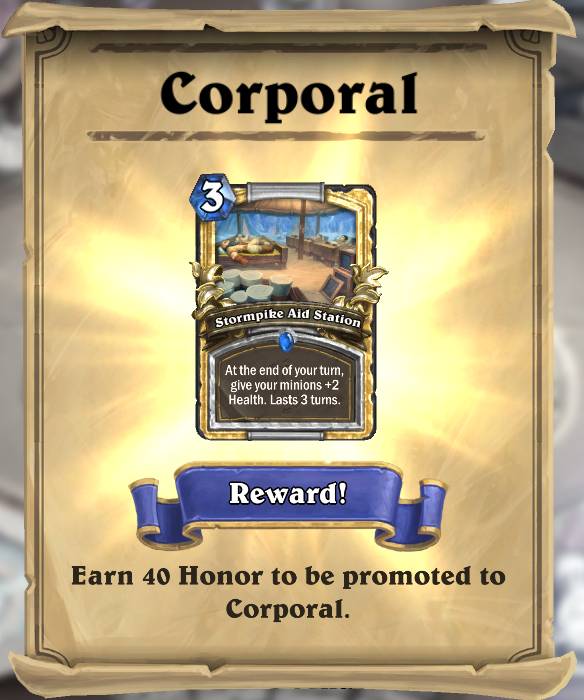 Hopefully nobody out there ended up going crazy and playing dozens and dozens of games on the patch day just to pad their Honor count. Well, aside from a few dedicated individuals. Understandably there are people out there who aren't all too happy about the whole situation. We currently do not know whether the developers plan to take notice or are even able to go back and add any of that missing early Honor retroactively. We'll be sure to update if we do!

Good luck accumulating as many Honorable Kills of the opposing faction as possible! After all, that's going to count for this faction war and which card between Vanndar Stormpike and Drek'Thar gets the desired Diamond treatment in the end. We ought to show them all. And we might actually see some social media updates with stats and everything from time to time.

Have you climbed any of the Honor Ranks yet? And how satisfying was it to collect those Alliance or Horde scalps?