Hearthstone Esports kicks off another competitive year with Masters Tour One - Onyxia's Lair. And this time around the stakes should be higher than ever. Grandmasters can no longer shrug off their results in these events, with a lot of other players feeling more inspired to fight for their spot at the 2022 World Championship. On top of that, we've just observed the Mini-Set release, shaking up all the usual preparation patterns. It's shaping up to be one diverse field.

With the Swiss rounds commencing, all of the decklists have finally become public - that's 367 players with 4 decks each; a hefty amount from Pros to look at! Many of the competitors haven't been posting their ladder choices for the past couple days, trying to keep that little bit of advantage hidden while testing promising new builds. So surely it's all Kazakusan Druids from this point onwards?

Well, we might certainly see some of that fresh spice. But other players have decided to simply use a safe approach, going so far as to bring only the previously known reliable decks without a single new Onyxia's Lair card in them (at most with the obvious Rustrot Viper tech slotted in). These lineups won't be our focus, as we have already thoroughly covered all of them before:

So the interesting new stuff it is. We've spent quite some time going over hundreds of decks to focus on curious picks from some of the top players that everyone might be very familiar with. We'll have to see whether their bravery pays off by the end of this weekend. The usual disclaimers apply: tournament decks - while often very similar or even the exact same as the ladder ones - can contain particular tech cards, attempt to target a certain strategy (be it anti-aggro or punishing slow decks), or be prepared with banning their one weak matchup in mind. But they should still provide us with a good deal of inspiration for whatever deck angles to try out in the coming days.

Aside from the free packs, these competitive events are always worth tuning into if you'd like to become a better player or just learn how to pilot (or sometimes, how not to) any specific decks. It's not always as straightforward as it looks. And we can count on the casters - or occasionally even on the broadcast chat, when it's not memeing about missed lethals - to provide further insight or expertise.

The timezones of Masters Tour One - Onyxia's Lair aren't particularly friendly for those outside the APAC region, which had already caused a few competitors to miss their registration windows while they were busy adjusting their sleep schedules. They got a second chance, but at the price of starting with a game loss in the event. Ouch.

Continuing the recent tradition, HSEsports has been taken over by a familiar villain for the weekend:

Oh, and there is a brand new marketing strategy in play to better showcase the new skin bundles:

If you want a preview of the newest Hero skins, just tune in to the Masters Tour this weekend. The players have been told "new skins mandatory".

For Priest, Demon Hunter, Druid, Warrior you have to choose the new Hero Portraits released with the Onyxia's Lair Mini-Set. For all other classes you're free to use any Hero Portrait.

Thanks to invaluable WickedGood, we are able to take a quick glance across the diverse set of archetypes: 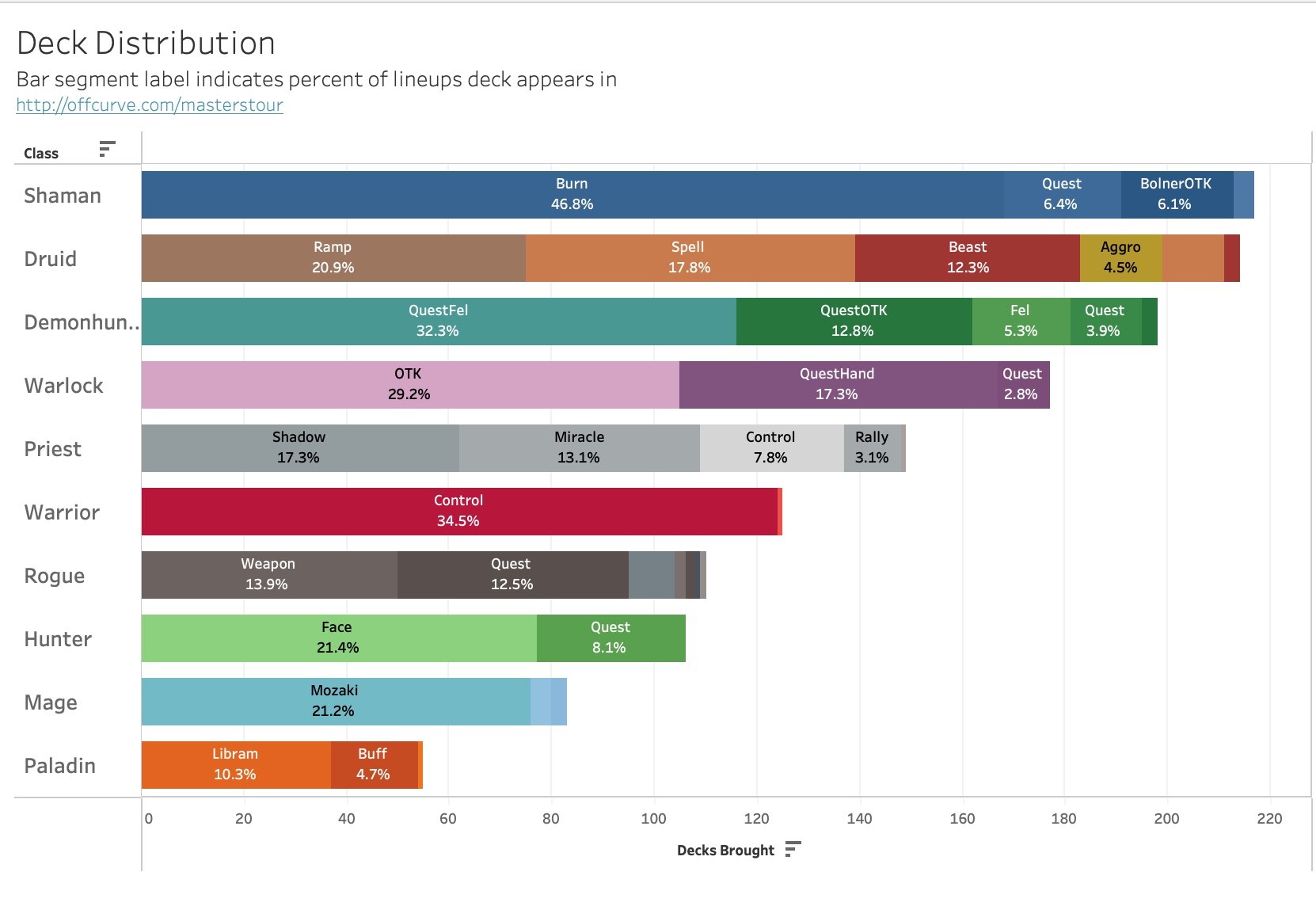 This is still one of the most diverse metagames to date, no doubt. Even within a single class there isn't always only one clear choice. Expect at least some of that to trickle down onto ladder in the coming days, especially the more succesful decks. HSReplay is even running a live Onyxia's Lair filter for that very reason. WickedGood also breaks down these stats on the newest Coin Concede podcast (while Dragonrider does the same on the side).

We know the larger deck landscape, so let's jump into some of the more spicy picks. Perhaps you'll find a new favorite to try out!

2019 World Champion Hunterace has been on a break from competing (while still doing a bit of casting and card reviewing) ever since his unfortunate relegation from Grandmasters, and this first Masters Tour of the year marks a grand return. Made even grander by including Kazakusan in this version of Quest DH.

GivePLZ has decided to try something else as well, by pairing Lion's Frenzy with the new Razorglaive Sentinel for more cycle, on top of the standard Fel package.

Kazakusan Ramp Druid might've been the most popular ladder deck of the past few days, so it's no wonder we're seeing quite a lot of them here. It better live up to the hype.

A different take with the same fine Kazakusan - from 2020 World Champion and 2021 runner-up Glory.

So Gregoriusil had this crazy idea to actually bring Questline Druid. There are no new cards here, but it absolutely deserved a shout-out. Even if the deck ends up letting him down.

Orange thought to take the known Face Hunter in a different direction, pairing the new Furious Howl with Bloodseeker.

Furious Howl has also elevated the chances of Quest Hunter. It's been more popular on ladder lately, and quite a few players decided to give it a go in the tournament as well.

Shadow Priest got no new cards, so it's all old builds. Miracle Priest remains fairly popular, with a copy or two of Horn of Wrathion making it into the lists.

Ike, another known player from the past now returning to more active competition took a step beyond by cutting Nazmani Bloodweaver and going... bonkers.

And of course there had to be a Kazakusan Priest deck.

SI:7 Rogue enjoys extra popularity with the addition of SI:7 Smuggler (especially with it being better than intended for the time being), so it's no surprise to see a decent amount of them. Mr. Smite and Edwin, Defias Kingpin tend to get the boot.

A dash of creative madness? Whether he still counts as a Wild representative or not, Hijodaikan thought to add Kazakusan and Whelp Bonkers to the known Garrote package.

Burn Shaman is a known quantity, and the lists we see are all very familiar (give or take a tech card or two). No new cards in that archetype.

But you can always count on wiRer to attempt something fresh elsewhere. This shell of Bolner Hammerbeak OTK Shaman runs two copies of the new Volcano - Don't Stand in the Fire!. Seriously, don't.

If it isn't the older Captain Galvangar + Faceless Manipulator version (that many other players chose to bring), then it's going to be this version. Put all your faith in Kazakusan. Otsuna believed.

Most other decklists do not contain anything from the Onyxia's Lair Mini-Set, and we've covered them in greater detail before. There is no need to repeat that. Mages, Paladins, and Warlocks especially chose to snub the new cards. If you wish to check out or grab any of these known decklists, just head to this address:

That should paint a sufficiently broad picture. It's still largely all older cards and decks, with these daring individuals above trying to establish a foothold. Plus all the Kazakusan you can stomach. Once the tournament moves ever closer to the finish line, eliminated pro players will likely take to ladder grinding again; and this time won't have to keep their results secret. We'll have to see what trickles down later to shape the Onyxia's Lair metagame, and whether any balance changes get announced based on these decks' performance in the ongoing Masters Tour. We'll be sure to keep you posted!

As always, you can use the following for even more relevant data:

May Kazakusan only ever offer you the overpowered Duels treasures.

Are you following this Masters Tour? Any of the quirky decks caught your eye, or do you prefer to stick to the old favorites with no new cards? Have we missed anything spicy from your favorite players? Let us know!