Back when United in Stormwind was released back in August 2021, our profile journals saw the introduction of a brand new Weekly Quest, asking us to complete 3 of the 10 Questlines introduced with that expansion.

The player base initially perceived such quest as a cool addition to the pool, since it created more variability and directly promoted one of Stormwind's main mechanics. On the other hand, players needed to own at least one of said Questlines in order to complete the quest, making it dependent on what you received from your packs or how you invested your dust. Fortunately for our readers on a budget, the reroll function allowed (and allows) players to get a new task, therefore reducing the chances of being stuck with an uncompletable/undesirable quest. 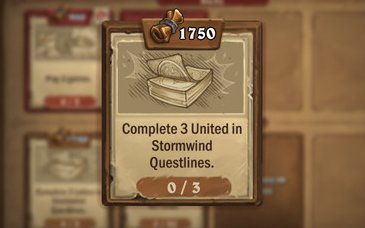 Fast forward to today, United in Stormwind is now almost a year old: most Questlines have been heavily nerfed (Sorcerer's Gambit, The Demon Seed, Raid the Docks), none of them are currently seeing any form of competitive play and few if any are seeing some fringe experimentation (Seek Guidance). Getting this quest offered (especially after a reroll) feels very unfortunate, even more so if you were not around in 2021.

The possibility of removing this quest from the pool was recently brought up by Hearthstone streamer Zeddy, to whom Hearthstone Game Developer Cora "Songbird" Georgiou replied stating that it will be removed with the next set release - if we were to take a guess, this means that "Complete 3 United in Stormwind Questline" will disappear in 2 months at worst. On this matter, you may be interested to read our speculation article regarding the Year of the Hydra's 2nd expansion's release date!

On a side note, Cora mentioned that the Daily Tradeable Quest ("Play or Trade 15 Tradeable cards") will be removed as well.

Can we get rid of this weekly quest already?

Yes! This one and the Tradeable quest will be gone with the new set release.

But that's not all from Cora. She was spotted on Reddit responding to people talking about the aforementioned tweet. Here's a recap of what she had to say, full context can be found further below.

We've said it multiple times in the past: there's a clear difference between constructive critique (even when it comes to developers messing up something and you pointing it out) and being jerks. Don't be jerks. Seriously. It almost as if the game were suggesting you to play a certain mode...

Weirdly enough, before Stormwind, we had Weekly Quest themed for each expansion. I wonder why we never got [themed quests for Alterac Valley and Sunken City] and instead just kept Stormwind weeklies for a year.

My understanding is we had some restructuring within the team around that time and it got lost in the shuffle of who should be responsible for it. Obviously not a great answer, but it shouldn't be an issue now. Going forward we'll be back to updating 1 daily and 1 weekly quest for each expansion. The ones for next set are implemented and ready to go. :)

You wouldn't do sh*t either if nobody or some streamer complained.

We updated the quests for the new set several weeks ago. I understand the frustration, but in this case it was done before Zeddy posted about it.

That more or less explain/justify the first time it got not updated. But then all of you, as all of us, keep seeing that Weekly again and again, and nobody did nothing to solve it until now.

Yeah, there really isn't any justifying it. It's not good. I won't bother with excuses because they're irrelevant. It's fixed now and I wish it were fixed sooner.

Thanks for the transparency as always Cora, I appreciate you coming here to clarify and clear things up for your players.

While I have your attention here on the topic of Hearthstone quests, is it possible for the team to consider tweaking the Spell School daily quests to make them more accommodating and less time consuming for traditional Haarthstone players ?

For example instead of "Deal 100 Holy damage",which I assure you takes more time to complete than most if not all weekly quests, which is kind of insane in its own right considering this is just a daily quest! Would it be possible to change that to "Play 10 holy spells OR deal 100 Holy damage"? This way players would have a lot of choice in which game mode they can efficiently finish these Spell School daily quests in. Thank you reading my suggestion and have a nice day.

Yeah, this is a good suggestion. I'll raise it with the team and see what they think, but I personally always roll these away so I doubt their completion rates are high. Seems like a good candidate for a change maybe.

Say you don't play Mercenaries without saying it….

It's definitely intended to be a crossplay quest with Mercs, but there has to be a way to make it fair across formats. Something like instances of damage rather than total damage so it isn't a complete dead roll for Standard (and other modes) players while still being a quest Mercs players want to see.

Having the Questline quests when I never pulled any really felt bad. It’s a weird choice to make a daily quest that can literally not be completed if people weren’t lucky with packs.

Making quests for legendary cards feels pretty bad. We obviously want them to tie into the mechanics of the new set, but we also don't like them being prohibitive to players with smaller collections. I think we would avoid something like this going forward.

Are you looking forward to more weekly and daily quests in the future, with expansion themes? Are you happy to see the Stormwind quests kick the bucket in a future patch? Let us know your thoughts in the comments below.