Did you know that if you copy a Colossal minion, the copy will then summon the appendages? This deck makes use of that effect with multiple cards that summon copies of minions. In addition, the most important element of this deck is the Emperor Wraps hero power from the Making Mummies quest, which means you have a copy effect available for just 2 mana every single turn.

In addition to being able to summon the appendages of Colossals as a bonus in addition to getting a 2/2 copy of a colossal itself, many Colossals have special synergies with their appendages meaning having 2 or more Colossals of the same type in play at the same time, along with multiple appendages, can be extra powerful.

This deck uses Ambassador Faelin to get colossals into the deck and has the Paladin colossal, The Leviathan, in there as well. Overall, Colossals have been a major upgrade to Making Mummies Quest Paladin, and if you want a deck that really plays around with them and Faelin, give this one a try!

The idea to use Ambassador Faelin in a Making Mummies quest Paladin deck to use the hero power to duplicate Colossals comes from Nirast.

Making Mummies Paladin starts with completing the Making Mummies quest by playing Reborn minions. Then, it uses the quest reward hero power Emperor Wraps to duplicate Colossals and other powerful minions with Reborn and Deathrattles. It also has 2 powerful finisher cards for the lategame.

Colossal Duplication - You can use Emperor Wraps and Prince Taldaram to duplicate Colossal minions. When you do so, even though the minion itself is either 2/2 or 3/3, it will also summon its respective appendages. This means you get extra value from duplicating these minions. Kel'Thuzad resummoning Colossal minions will give you this bonus effect as well.

Kel'Thuzad can be good in other scenarios as well to generally resummon minions, even if they don't have Taunt. He is extra great with Colossal minions, as when he resummons one, even if it was a 2/2 copy, it will be resurrected with full stats and will summon its appendages as well.

N'Zoth and Deathrattle Duplication - You can duplicate Deathrattle minions to create more value by themselves and for N'Zoth, the Corruptor. One Khartut Defender duplicated once will lead to N'Zoth having 4 Khartuts to resurrect later. You can also go for lategame value by duplicating Murgur Murgurgles multiple times or go for pure aggressive stats by duplicating Tirion Fordring.

This deck has a weak early game while it is playing the Reborn minions to complete the quest, but becomes very powerful after the quest is completed. Before and after - this shows how powerful duplicating a Colossal can be, as you get both double the bonus from the main body and double the number of appendages. This shows the potential power N'Zoth, the Corruptor brings to this deck. This shows how you can get a lot of Murgurgle Primes for value in the late game.

The key to playing this deck well is to save your key minions like Colossals and Kel'Thuzad for the right moment.

Ambassador Faelin adds 3 Colossals to the bottom of your deck, and you have multiple ways to get them.

First of all, Murgur Murgurgle's Deathrattle shuffles the deck and may put some Colossals near the top.

Seafloor Savior can Dredge up a Colossal, and The Leviathan (which is a Colossal itself) can Dredge some up as well.

Finally, you can get all 3 Colossals at once by either using Sir Finley, Sea Guide to put them all into your hand or Lorekeeper Polkelt to put them all near the top of the deck.

You have 3 main ways to duplicate Colossal minions: Emperor Wraps, Prince Taldaram, and Kel'Thuzad resummons. Keep in mind that the Colossal will be summoned first, and then as many appendages as there is space for.

Crabatoa - This is a very good target for duplication, because each extra Colossal makes all the appendages, which are 2/1 claws with Rush, have 2 more attack, also counting towards the 2/1 weapon they equip as their Deathrattle. Therefore, with 2 Crabatoas, you can have 4 6/1s with Rush for a total of 24 attack power and a 6/1 weapon after they die. This becomes more and more powerful the more Crabatoas you have on the board.

Colaque - This is a pretty good duplication target, but not as good as some others. You do get another shell which is both a 0/8 Taunt and 8 armor which is good for defense, and the Colaques themselves will have more of a chance to retain their immunity longer.

Glugg the Gulper - One of the best Colossals to duplicate, the copies gain stats and grow to far larger than the original 2/2 or 3/3, as well as summoning more 2/2 Taunts each time.

Hydralodon - This is ok to duplicate, as you will get more appendages, but they won't have Rush as Hydralodon gives it to them as a Battlecry. Keep in mind that this can ruin your N'Zoth, the Corruptor pool.

Nellie, the Great Thresher - This is amazing for value, as you can Discover 3 great pirates and then duplicate the ship instead of Nellie to have a 2/2 ship that will give the same 3 pirates for 1 mana. If you'd rather have more stats, you can duplicate the Nellie to get a 2/6 Taunt, but that Taunt won't give any pirates to your hand.

The Leviathan - Paladin's own Colossal, this is one of the best to duplicate as both the appendage and Colossal itself have Divine Shield and Rush, and you will be able to trade and Dredge and draw an extra card the same turn you duplicate it.

Xhilag of the Abyss - This is the worst Colossal to duplicate, just because it has so many appendages it's not going to be able to fit all of them on the board unless most of the first Xhilag's tentacles have already been destroyed. However, it is good to have multiple Xhilags even if you don't have more appendages because it will increase the rate at which the tentacle's damage will increase. Due to it being at the start of your turn though, this will rarely be good unless you have a Taunt because a 2/2 Xhilag with no immediate impact is easy to destroy.

Blackwater Behemoth - Also one of the worst Colossals to duplicate, since its appendage is just a 1/4. It can be useful if you need more hp quickly, but it's generally better to use your duplication effects on other minions.

Gaia, the Techtonic - This is possibly the best Colossal to duplicate of them all, because both the appendages and Gaias scale with each other. You can see how great it is by imagining the easy to do case of 2 Gaias. This will result in 4 appendages and 2 Gaias, meaning you can do 8 damage to all enemies immediately (2 damage each and 4 appendages with Rush). If this clears the board, you can then get a 3rd Gaia and maybe even a 4th to have 3 or 4 damage per each Mech attacking and a full board of mechs. This can easily snowball into over 10 damage to all enemies per turn, and is a potential win condition on its own.

Gigafin - This is good to scale just for the stats, as you get a free 4/7 Taunt for each Colossal you copy. Keep in mind that this can ruin your N'Zoth, the Corruptor pool. A 4/7 Taunt is good, but in some matchups where you really want value from, for example, multiple Murgur Murgurgles you should be careful with duplicating Gigafin too much before you have played N'Zoth. 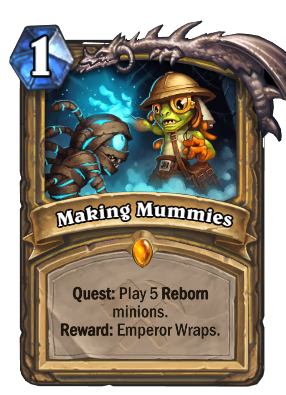 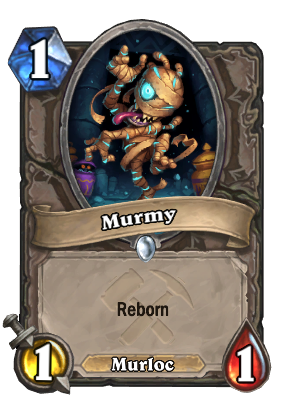 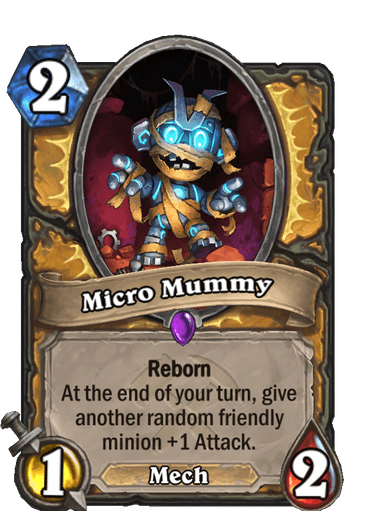 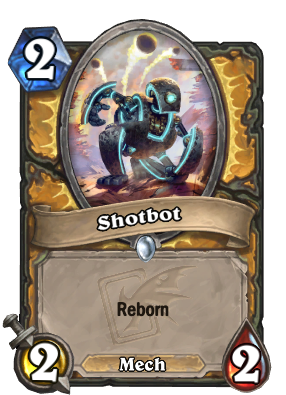 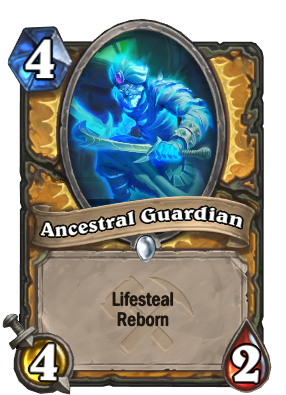 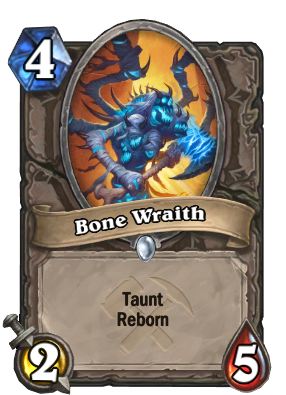 This Reborn package is mainly for completing the Making Mummies quest. 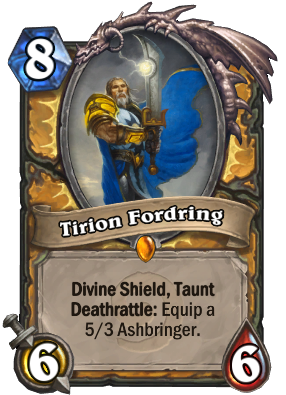 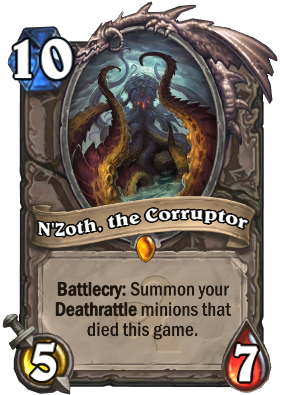 These Deathrattle minions are great to duplicate and get back with N'Zoth, the Corruptor. 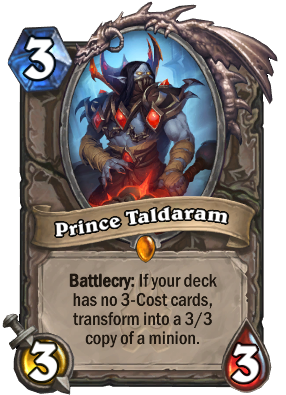 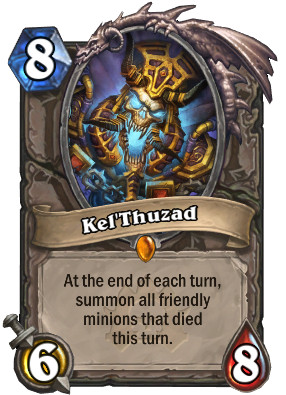 Prince Taldaram is here to duplicate Colossals and Reborn and Deathrattle minions.
Ambassador Faelin is here to add 3 Colossals to your deck.
Zilliax is great anti-Aggro given how many mechs this deck has.
Finally, Kel'Thuzad has great synergy with minions from any other package. 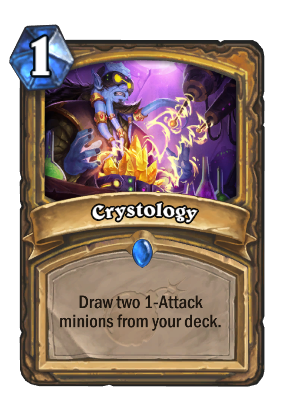 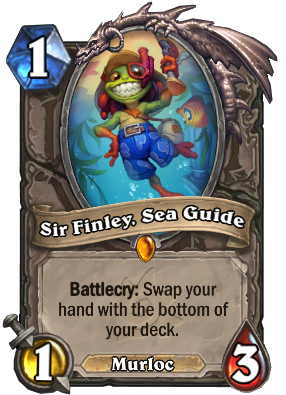 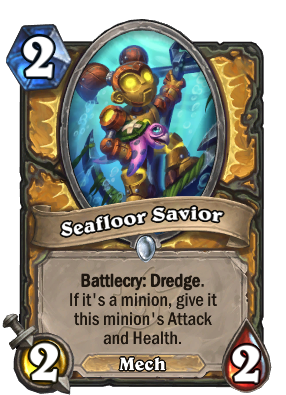 Crystology hits either cheap Reborn minions or Sir Finley, Sea Guide.
Sir Finley, Sea Guide can generally replace your hand if you need it to, and can get the 3 Colossal minions at the bottom of your deck after Ambassador Faelin.
Seafloor Savior can get these Colossals as well, and also improve the quality of your next draw in general. 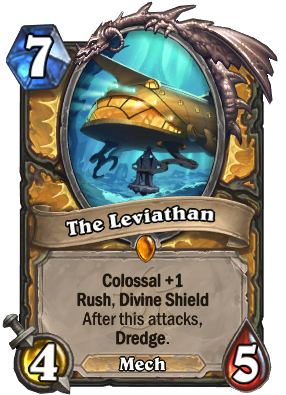 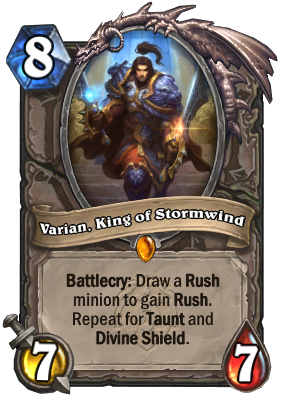 Lorekeeper Polkelt puts your key cards on top of your deck, including N'Zoth, the Corruptor, Kel'Thuzad, and any Colossals shuffled into the deck by Ambassador Faelin.
The Leviathan is both draw and Dredging for bottom of deck Colossals. It's also a Colossal itself and works extra well with duplication.
Finally, Varian, King of Stormwind can draw 3 cards as well.

This is one of the most fun decks that uses Colossals. If you like colossal minions and want to play with as many of them per game as you can, this is the deck for you. If you have a question or comment, or are wondering about a card substitution, post below.