Unsurprisingly, it's a modest patch for Hearthstone Mercenaries - with a few special portraits (you might've seen some of them showing up before on various bounty icons in the game) being given to all players who've completed the tutorial before, and yet another Old God special limited-time event on the horizon.

What should be the most interesting piece of news here is not something that's happening today or perhaps anytime soon, but the team has clearly felt it's important to get the word out on the upcoming exchange system for excess coins. After all, it's one feature all players have been looking forward to pretty much since the mode's launch.

Last but not least, there's been also a number of various bug fixes for abilities, equipment, and bounties - we don't know whether it covers all that wasn't working properly, seeing how many issues were being previously reported.

Here is the official word on all things related to Mercenaries:

Any player who has completed the Mercenaries tutorial* will receive special Portraits for Tyrande Whisperwind, Millhouse Manastorm, and Xyrella! These Portraits are a thank you to everyone who has tried out Mercenaries since its launch. We know that you’ve all been eagerly waiting to see what major changes we’ve been working on this year, including what you’ll be able to do with your excess coins.

Later this year, we’ll be adding a system that will let you exchange some of your excess coins for random coins for a Merc you own but haven’t yet Maxed. We’re also still working on the end-game content that was hinted to in the Year of the Hydra announcement, including a way to use excess coins to add power and personalized traits to your Maxed Mercs, all of which we still expect a bit further down the line.

It has taken us a little longer than we’d hoped to implement these systems, but we wanted to let you know we have a clear plan on our goals for these projects, we are actively working on them, and they are coming. We consider this to be our highest priority in Mercenaries development; we just need some more time to make sure it’s done correctly.

* This is a one-time award for accounts that have already completed the Mercenaries tutorial when Patch 23.6 launches. Those players will automatically have these portraits added to their Collection. These Portraits may become available to other players through other means at a later time. 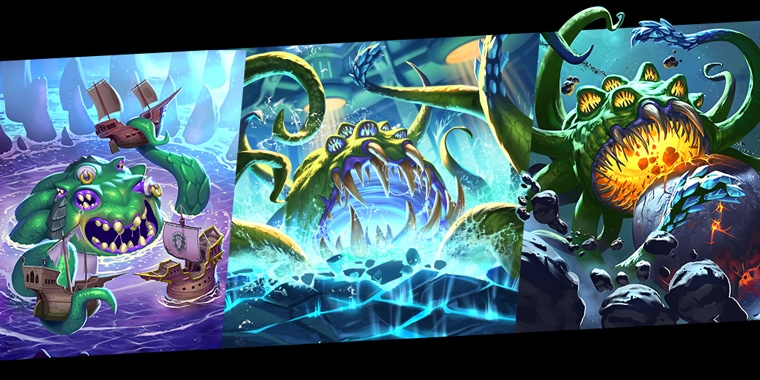 The Old Gods continue their onslaught as Yogg-Saron turns its many maws towards Mercenaries. You will be able to take on MADNESS itself in this limited-time event, starting on June 30. The event will consist of 10 special Tasks centered around the Old God Yogg-Saron. Two new event Tasks can be unlocked on each of the first five days of the event, but you have until July 15 to complete all 10 Tasks. Completing all 10 Tasks will get you the Yogg-Saron Mercenary, a random Golden Yogg-Saron Portrait, the Diamond Yogg-Saron Portrait, and 700 Mercenary Coins! Naga, Casters, and a couple of Night Elves will be integral in this battle.