Halfway through this year of competitive Hearthstone Esports, the fourth Masters Tour event continues unfolding over the weekend. It's also actually the first stop on the path towards the upcoming Masters Fall Championship, with every game won counting as a firm point on the scoreboard. And so the stakes remain as high as ever for any aspiring 2022 World Championship competitors.

With the Swiss rounds commencing the other day, all closely guarded decklists from the top 345 qualified players have finally become public. At 4 decks per person, that gives us the usual large amount of ideas to browse through; could somebody manage to 'break' the tournament meta, and in turn influence various ladder choices we keep seeing in our daily Hearthstone games? After all, the potential space for ingenuity has greatly expanded as of late.

The newest free Legendary card in the form of Prince Renathal has been making waves for a good reason, splitting even the pro players when it comes to judgments about its potential - be it short- or long-term. But this is also the first large tournament since the sweeping balance patch notably shook up the Standard metagame as a whole, dismantling Naga Mage and pushing Control Warrior off its pedestal. 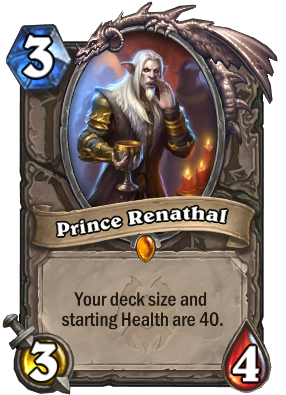 So there should be more than enough interesting stuff in there to look at. For that reason, we spent a good deal of time going over hundreds of lists to focus on curious picks from some of the top players that you might be more or less familiar with. The usual disclaimers apply: tournament decks - while often very similar or even the exact same as the ones found on ladder - can contain particular tech cards, attempt to target a certain strategy (be it anti-aggro or punishing slow decks), or be prepared with banning their one weak matchup in mind.

Other than that, these choices often provide a reliable sense of direction and inspiration. As usual, we're also going to avoid spoiling any score results from the event itself.

As has become the unofficial Hearthstone esports tradition by now, the big patch dropping just about 3 days before the huge tournament and changing the status quo did manage to upset many players who'd been preparing for weeks by that time. Especially with this particular announcement following the news:

Prince Renathal is available for Masters Tour: Vashj'ir! Prepare your decks for this weekend's tournament, and show us what you can do.

There was the rightful (?) anger, the calmer understanding, and even Hearthstone developer Celestalon was seen jumping into the debate along with a number of prominent community figures. In the end, your friendly neighborhood Product Manager Abar came forward with a statement:

Hearthstone is a for-profit business. Esports does not have to exist within that business model. We earn our keep by demonstrating our value to the team’s overall business goals as a form of marketing. Selling expansions is at the core of Hearthstone’s business, and people buy things when they’re new. When there are opportunities to use our program to draw attention to new things available for purchase, those are the moments at which we demonstrate our value.

We have to do our part to help make Hearthstone successful, and we really are all in this together. It’s not players vs. Hearthstone Esports. It’s players + Hearthstone Esports vs. the bottom line. We’re a team. I really hope people understand that we're a team. I hear you. I’m listening. For better or worse, I’m always listening. The answer is never that nobody cares. Appreciate you, everybody. Especially those of you who were positive and respectful even while frustrated. […]

For what it's worth, this is still far better than the recent situations, in which we saw Blademaster Okani getting banned ahead of the 2nd Masters Tour (all because of a delayed patch release with added mobile issues), or the latest fiasco with the bugged cards pretty much removing the Shaman class from the entire Masters Summer Championship. The show must go on - as long as it can do so without impactful huge issues, hopefully.

Following another little tradition, this time around HSEsports Twitter has been taken over by one and only Sir Finley, Sea Guide. Sensible murlocs make for fine underwater divers, after all.

What's even more important, WickedGood has once more shared a couple of invaluable graphs, allowing us to draw some quick conclusions about all of the existing decks and lineups across the field: 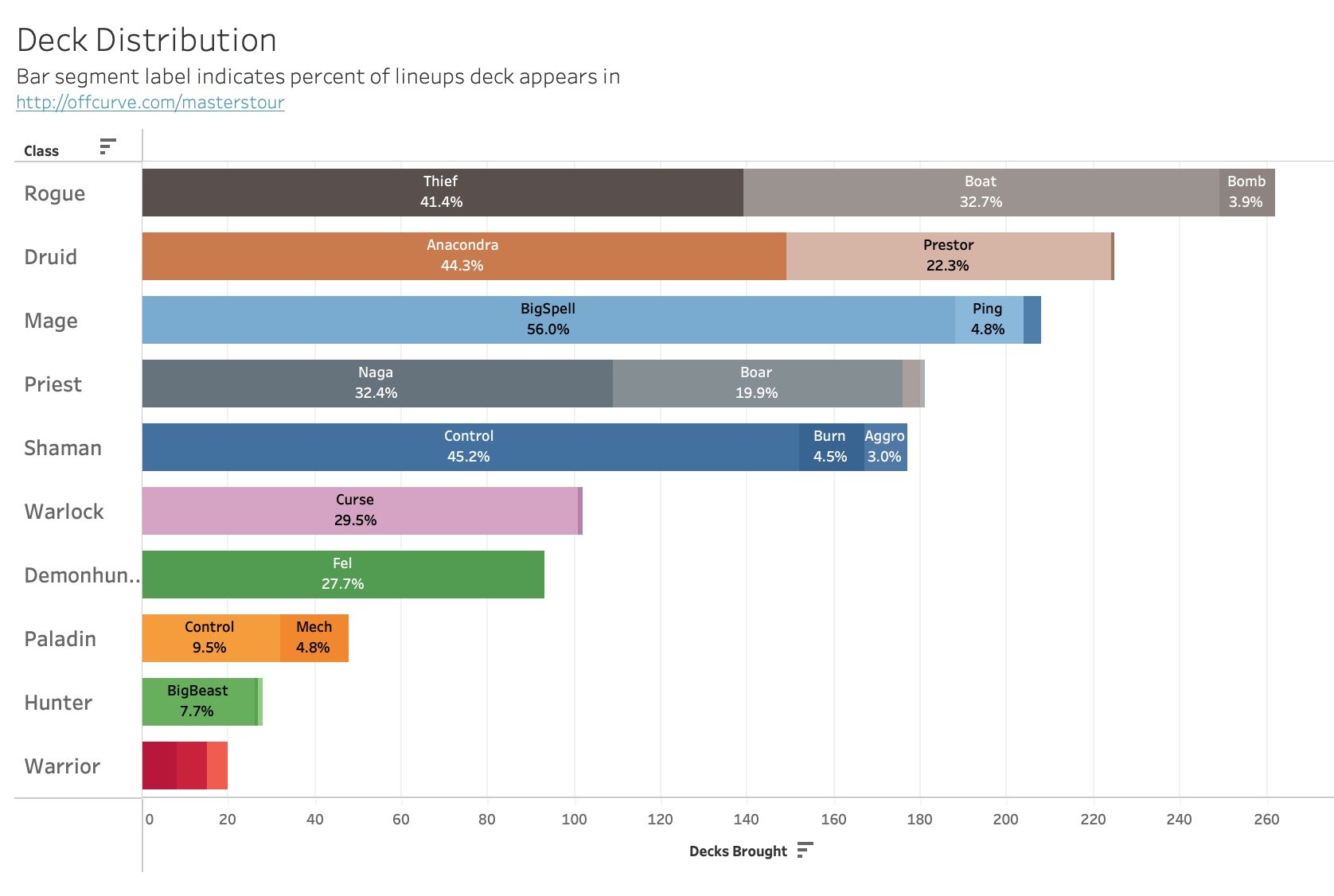 The total number of various deck archetypes isn't perhaps as high as we might've hoped. Although you might easily notice that there currently isn't a simple distinction between the 40-card lists featuring Prince Renathal, and those 'old school' takes going at it with just 30 reliable picks. This kind of data might become available later down the line.

But as this new way of playing Hearthstone (sort of) is most notably on everyone's minds, that's the type of examples we're definitely going to focus on closely here. It won't be all oversized lists for obvious reasons (and I suppose we won't be calling them "XL decks" either), as there aren't nearly enough of those for all class variations. Additionally, not planning to draw much attention to the known older builds (think Boars, Nagas, Mechs).

Listed in order of class representation and popularity, let's see which decks might have what it takes to become our new favorites!

There is the obvious, and slightly less obvious. With Blademaster Okani being almost everywhere, the most known list remains as is:

But where is the fun in that? Fortunately, some players chose to put the "thief" part back in Rogue, with a good deal of random class card generation:

How about taking it one step further for a supersized edition?

And because Mine Rogue is still a thing for the faithful minority of players:

Celestial Alignment has its fair share of passionate haters, yet apparently also a good number of fans who believe in its power. The more or less regular version sometimes uses a Park Panther, Escaped Manasaber, or Spammy Arcanist instead of Blademaster Okani and Goldshire Gnoll

But why not include most everything there is instead? The 40-card version is actually far more popular at this point in time:

You know what other supersized Druid variant is also very common? The one with fake dragons, courtesy of one Lady Prestor:

Even among all these Prince Renathal decks, not everyone agrees on the "perfect 40".

It's mainly the two distinct Big Spell Mage lists. Some builds even include Mordresh Fire Eye (Sir Finley, Sea Guide is even more common). Varden Dawngrasp actually not seen nearly as often as one might expect.

Of course somebody had to try a larger package, for what it's worth:

That's not all there is, however. Even though the two more 'traditional' takes remain very rare:

It's not like Serpent Wig variant with its Nagas has really changed, either. If it's not Blademaster Okani replacing a copy of Queensguard, then it might be Queen Azshara. And some people just stick to the simpler list without such Legendaries.

And yet, one brave individual has decided to try something completely different:

Murlocs. Be it just a handful of Murlocs or an army of Murlocs, the trend is evident. For the so called 'Control' version, not everyone is a fan of the nerfed School Teacher - but just as many players don't appreciate Windchill (South Coast Chieftain appears far less often than those). Interestingly enough, Colossal Glugg the Gulper has finally started seeing the light of day:

If you really like to keep it simple, the 'pure' Murloc direction is still around. Just barely seen in this tournament.

Following the tempting trend of more cards and Health? Here you go.

An unexpected blast from the past, now with more options. Thought The Demon Seed was gone for good? Surprise.

Naturally, that's not the only bigger deck around these parts. As for the more known take on throwing curses at your opponents:

Yet it's not all about the possibilities of Prince Renathal. We've also got something a little more 'old school':

There is the Naga 'lite' variant that's become popular even at the cost of not discounting Predation nearly as often (Herald of Chaos not being appreciated much).

Surprisingly little movement, but the class often gets neglected by top players. So there is the most known option from before:

Since not everyone seems to value Myrmidon, we've been seeing more of Vitality Surge inclusions.

While Mech Paladin just keeps to its reliable shell. If somebody is not running nerfed Mr. Smite, they are likely to slot in Battleground Battlemaster instead. Or two.

Familiar Big Beast archetypes stick to their variety of tools, with more than one way to approach the deckbuilding process:

We also can't neglect mentioning a different take on the current Aggro direction for the class:

Then at the bottom - or, if you will, the dredges of the meta - reside the sunken Warriors. They generally have a lot less use for the added 40 Health (what with all the armor at their disposal), and it doesn't look like anybody has been tempted by the true Wallet possibilities of 40-card decks. And so it's been more or less the combination of strategies we know more than well enough:

Pirates trying to punish all the supersized decks? I wonder how that story might end.

Almost 3 months into this expansion, the metagame looks to be noticeably refreshed - at least until players get all and any 40-card deck attempts out of their system. Either everyone has been pretty bored, or Prince Renathal aspires to be more than just 'meta defining'. After all, most pro players are known for erring on the safe side; not likely to risk bringing a number of new decks with barely a few days worth of testing - but the field shown above paints quite a different picture. The following weeks of development could be highly interesting for the Standard format.

As always, the following sources contain even more detailed information:

If you've ever wondered how a peak mobile gamer looks like, then tuning into the very first minutes of the Day 1 broadcast is well worth it. Apparently it's not only possible to qualify for a Masters Tour on the phone, but to compete at a high level on an unassuming device with no real deck tracker. Just a small inconvenience, as they say. Ahh, that gives one hope.

Finally, don't forget that the upcoming final day of this tournament is set to reveal a new expansion card! Or perhaps several. This should happen around the time Top 8 gets announced, after the usual Top 16 opening. It's good to see some love being extended to HS esports.

Have you been following this Masters Tour between the card reveals, perhaps to get a taste of all the spicy 40-card decks? Besides the free packs, will you tune in for the HSEsports card reveal(-s), or just be soundly asleep at the time? Any other interesting decks that might've caught your eye, in case we missed anything fun from your favorite player? All insights are welcome!