During the last week, Team 5 unveiled a rather large portion of Druid's set for the Murder at Castle Nathria expansion. Among all the new cards showcased, Rarran had the honor to reveal Convoke the Spirits, an Epic spell which is supposed to synergize with the new big minions/spells direction Malfurion seems to be pushed towards. 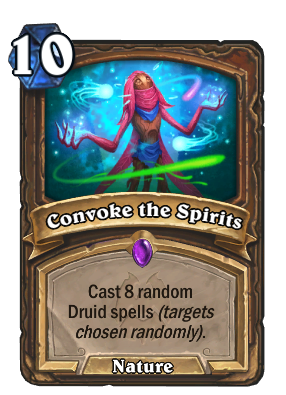 Two cards are still missing for the class, so we don't really want to give rushed judgments, but something we (and a large portion of the Hearthstone community) felt like pointing out is Convoke the Spirits' striking similarity with two other Mage spells: Puzzle Box of Yogg-Saron from Saviors of Uldum and Rune of the Archmage from last year's Fractured in Alterac Valley.

Although there's no denying that these spells have some aspects in common, Hearthstone Developer Cora "Songbird" Georgiou gave some insights regarding Convoke the Spirits' design:

I've seen some people noting that there are cards in this set that are similar to past Hearthstone cards, and you're not wrong. This is really similar to Puzzle Box of Yogg-Saron and Rune of the Archmage, but it's also pretty faithful to the WoW Covenant Spell.

On a final note, here are a couple tidbits regarding how Convoke the Spirits actually works. First of all, you may want to know that, just like Rune of the Archmage and Puzzle Box of Yogg-Saron, this spell won't be able to cast itself.

Can it cast itself?

Secondarily, Cora mentioned that they tried versions of Convoke the Spirits where the casted spells would prioritize certain targets (just like Solarian Prime or Jace Darkweaver), but they eventually scrapped these designs in favor of a more dynamic result.

Will it work like Convoke in WoW where it will prioritize certain spells depending on conditions?

We tried a version that would prioritize spells that target in some way, and would let you pick the targets throughout the spell cast. The targeted spell pool wasn't huge though and it made the time to cast Convoke really long. So this version has no prioritization, no.

What do you think about this card? Do you think it will see any play? Let us know in the comments below!