By now we've had more than a week to explore the mysterious grounds of Castle Nathria. While not nearly enough time for anyone playing more or less casually to familiarize themselves with everything there is - let alone get their hands on all necessary packs or dust for viable new cards - at the higher competitive ranks the metagame has been developing at a steady, faster rate. Which is pretty much in keeping with the usual tendencies.

However, the above holds true only for certain classes - not every single one has been privileged enough to stay in the running; even this early into the new expansion as we find ourselves. As we've already noted elsewhere, this situation is unlikely to change drastically until the first set of balance changes is upon us.

Update: Some of the upcoming balance changes have been accidentally leaked, and later confirmed by Blizzard! The patch is set to drop on Tuesday, August 16.

But that's a story for another day. For the time being, we shall focus on what's up there and still holding strong, rather than what could or should be. Don't forget to check back at a later date for even more decks making their way into the following list!

If you've missed our previous deck compilations and meta reports or just don't tend to memorize every little fact about all of the ongoing trends, the simple reminders are there:

What ends up being 'hot' during Week 2 is very much based on what came before, so don't expect many a great revelation. Players are still clamoring for buffs just as loud (if not louder) as they look forward to some necessary (?) nerfs. But it's worth noting the Hearthstone team hasn't been particularly willing to improve cards more than once per expansion, and historically these kind of patches don't really tend to happen at the start of a new set. Is it really possible we might see some sort of an exception or a different new direction unfolding here?

Meanwhile, people tend to form their opinions based on personal ladder experiences, the accounts of others, and the data publicly available to everyone. HSReplay has recently posted their 'regional power rankings' to sum up the first week of the expansion: 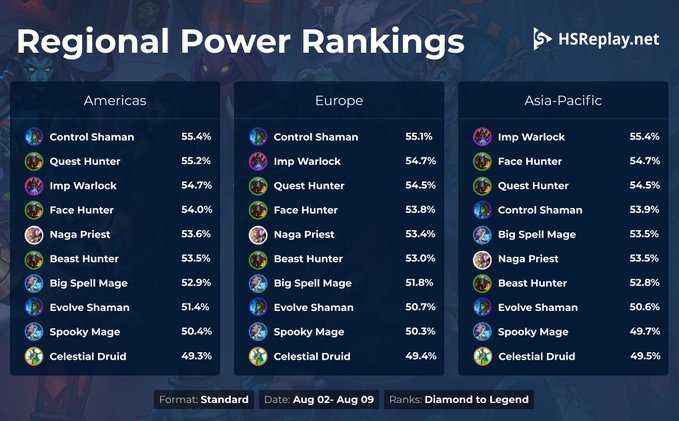 You will undoubtedly notice several suspects missing from this picture. The things might've only taken a turn for the worse since our latest report, with Demon Hunter and Warrior falling below 40% as far as winrates are concerned. Rogue and Paladin continued the downward trend as well. Even Druid and Priest as a whole are currently not breaking that 50% barrier. The exact numbers are generally not worth quoting, as they end up shifting every other hour. Regardless of such issues, there are still a lot of players heaping praises upon the current gameplay options.

As always, you can find some inspiration for your own ladder climbing across various successful decks listed below. Crafting many of the cards you don't own is still not particularly recommended, what with the balance changes due soon. Unless it's going to be Theotar, the Mad Duke, the ultimate new disruption card of the current meta and a Neutral, somewhat less triggering take on the infamous Mindrender Illucia.

There was also another Masters Tour unfolding over the weekend, so it's very much possible that various top players have kept some things close to their chest during the past week of ladder climbing. More spicy takes to come? These events always tend to inform the larger metagame one way or another - but it's also something we tend to talk about separately.

Update: As this tournament offered very little hope for the underperforming classes - 0 Warriors, only 2 Demon Hunters, and 6 Paladins were brought (which might be a negative record of some sort) - and didn't exactly justify a closer coverage with such sizable balance changes around the corner, we've instead added a number of varied decks from the 'good' classes as chosen by the pro players. You can find some of the alternative decklists below; chances are they might end up becoming even more popular in the coming days!

Your best bet here are the decks we've already showcased in previous compilations, otherwise things haven't been looking good for the class during this week. Even its greatest supporters might be forced to play something else for the time being.

The only exception was Habugabu, bravely trying out this Red Herring version (name may or may not be accidental) of Big DH at Rank 1 Legend. With an impressive score of 5-10, and merely dropping a few ranks as a result. But hey, the competition is not going to be as stellar for the most of us. Memes is all we have for now, so if you are feeling the urge to play something casually... at least you've been warned.

Various takes on ramping continue - be it Sire Denathrius, Kazakusan, or even the return of Naga Giant. Celestial Alignment has become less popular, but still fairly visible.

Feno won the recent Solary Party LAN event, as well as climbed high on ladder, so we can safely listen to his recommendations (also for Mage and Shaman, as you can find out in their respective class sections).

Still having a good time as a whole, but (Big) Beast Hunter seem to have started falling behind the other two. Face Hunters tend to be more popular than Questline variants, but with the coming fix to the bugged Twinbow Terrorcoil/Collateral Damage interaction, the indirect nerf will be in effect. We'll have to see whether the deck is going to take a performance hit and have to modify the list as a result.

There is already at least one slightly different aggro list floating around (bringing back Naga's Pride), as can be seen from the deck shared by Ruby.

Players continue to enjoy their 'Spooky'/Skeleton Mages - even when the winrate isn't especially stellar, it remains in the green. Which is more than good enough when you're having fun. The larger Prince Renathal version largely remains inspired by what we saw from Habugabu and others during Week 1.

What's more interesting here are the signs of the 'old school' Big Spell Mage resurfacing once more and trying to adapt to the new status quo, as well as Solid Alibistarting to make its way into certain decks.

Unfortunately, the class has been largely abandoned as of late. We haven't heard of any noteworthy success stories, and there was nothing new to report. If you wish to try your luck with Paladin regardless, you will just have to rely on the previously shared decklists.

Naga Priest is very solid, but not being played by many people. The fanbase just isn't there. Boar Priest has probably even fewer acolytes to spare (breaking news, a new card in the form of The Light! It Burns! has entered the list).

Questline Priest, on the other hand, tends to enjoy greater favor.

The winrates for the class aren't particularly inspiring as a whole, but that doesn't stop certain individuals from reporting impressive results. Meanwhile, the jury is still out on whether the complex Miracle lists are just bait, or actually a demanding example of high skill ceiling.

Some players even started going back to the basics, by giving up on the whole Loan Shark angle altogether. LambySeries has kept his #1 Legend list a secret until the start of the Masters Tour, for the sake of his friends who might've wished to use it in the tournament.

Among the most popular and strongest classes for a reason. To the point that multiple voices wishing for (another) nerf to Snowfall Guardian and/or some sort of truck hitting Brilliant Macaw have become very loud at this point.

The greedy Control list popularized by Habugabu has since become the baseline for various other players. On the regular Evolve front, Rami & pals celebrated in fashion once he temporarily rose to that coveted #1 Legend spot.

Curiously, there was also Dmoney finding a bit of luck with a proper take on Totem Shaman.

Zoolocks still reign supreme, even while having to contend with some counters. And they aren't all one and the same. The Curse package also does well for itself, through various takes that usually involve a handful of Imps.

The most spicy story of the week involves Furyhunter taking Pascoa's list and finding a positive winrate with it at top legend ranks. What's so special about it? Why, it's your familiar The Demon Seed structure, with some imps and an unexpected Reno Jackson as a guest star.

Possibly the most dead (not to be confused with deadly) class of the expansion. You'd have to go back all the way to Day 1 decks in order to find something to play here.

What has or hasn't been working for you during Week 2 of Castle Nathria so far? Is there anything in particular that you hope to see become weaker or stronger?