Just a week ago, one special Hearthstone Quest following the theme of Murder at Castle Nathria has unexpectedly appeared in our logs, offering a bonus expansion pack for relatively little effort. Back then it took everyone by surprise, as we didn't know what exactly was going on and whether this was a sign of a larger chain to come. But that was quickly clarified by Nicholas "DeckTech" Weiss, Associate Writer on Team 5:

Lo and behold, the announced second (and supposedly last) special quest has now taken the place of the previous. We knew when and how it would happen thanks to the existing countdown, but we've just had all the new balance patch notes grabbing everyone's attention instead.

Unless the initial plans have changed, don't expect anything else in this mold to come afterwards:

Are they doing one a week for awhile? I figured they had finally turned on the series we usually got on launch day.

There are just the two.

That's all the free packs Sire Denathrius is willing to part with for the time being (not counting the Masters Tour and Grandmasters tournaments happening throughout the month). 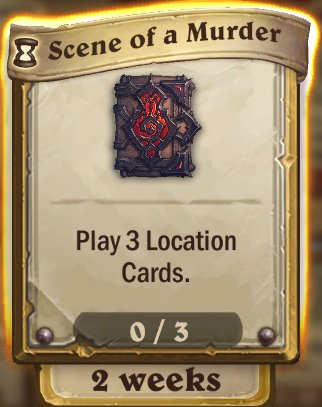 The usual rules apply - special quests now have a limited duration, so after the time is up it will simply disappear from your log. But since the requirement is even easier than the first one and there is twice as much time available for it, everyone should be able to get there just by playing as they normally would. As always with these type of quests, it takes up its own 'legendary' slot and doesn't take away from the regular three daily options.

May you find some good cards in your gifted pack! Hopefully we will see more Hearthstone 'events' before long. After all, everybody enjoys their bonus stuff.