Another Event, another chance to try out (and bemoan) new Loaner Decks! If you aren't up-to-date, we've compiled all the necessary information for the ongoing event in the general Festival Article. Though if you are more of a "Glass half empty" sort of person, you may prefer to just call this the "No Fusions x Links Festival".

This time around we have the opportunity to take Ghostricks, Odd-Eyes/Pendulum Magicians, or Swordsouls for a spin. We will mostly be describing the general strategy of each deck and point out some nifty plays. Let's see what's good: 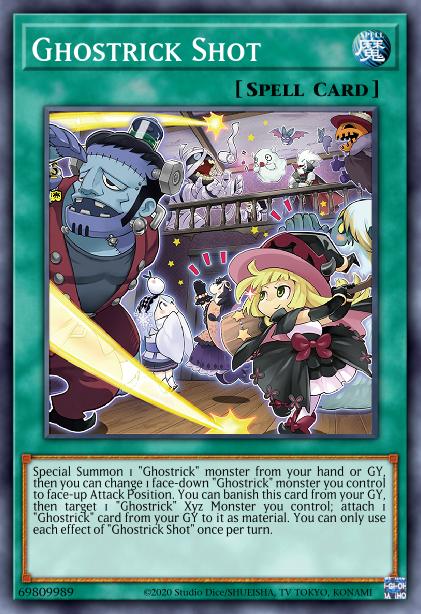 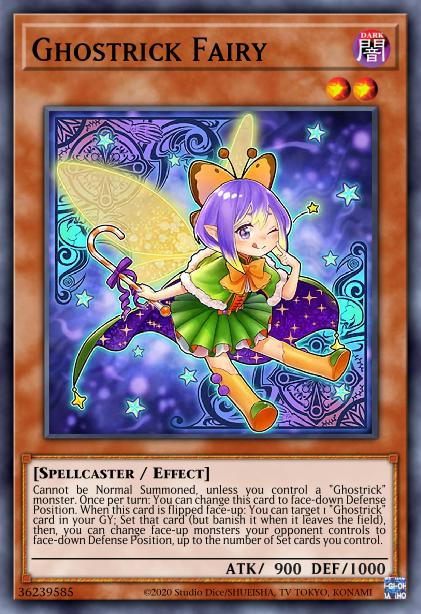 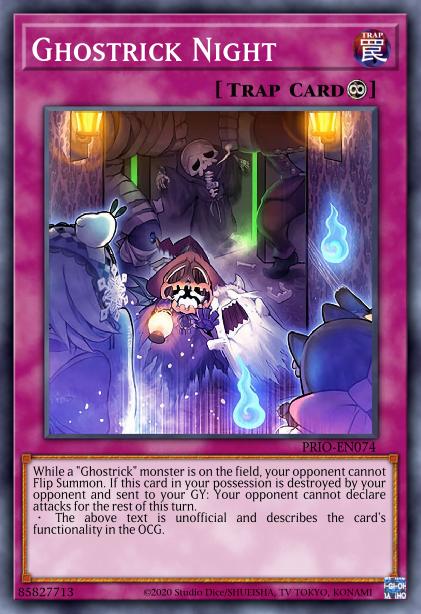 Oh, the irony. As we've come to expect by now, the three loaners aim to promote the new cards within the most recent Selection Pack. So what did Ghostricks get? A Link Monster! At least it's not as bad as offering us a "Fallen of Albaz Beatdown" deck, since the archetype also received Ghostrick Shot, Ghostrick Siren, and Ghostrick or Treat.

Ghostricks are the kind of slow deck that shines in harsher events, such as the N/R only Festival from a while back. They do have some Xyz Monsters of their own, but the Main Deck doesn't really support any kind of swarming to enable them. Instead, the main strategy of the deck is to stall thanks to their Field Spells that deny attacks on face-down Monsters, as you slowly set one Ghostrick after another, generating advantage with their repeated flip-effects.

Defense Is The Best... Defense? 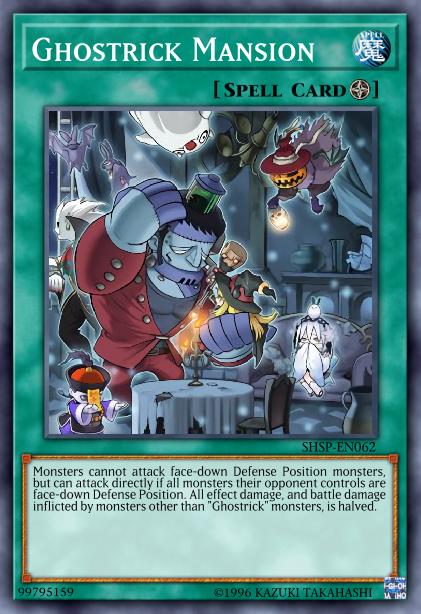 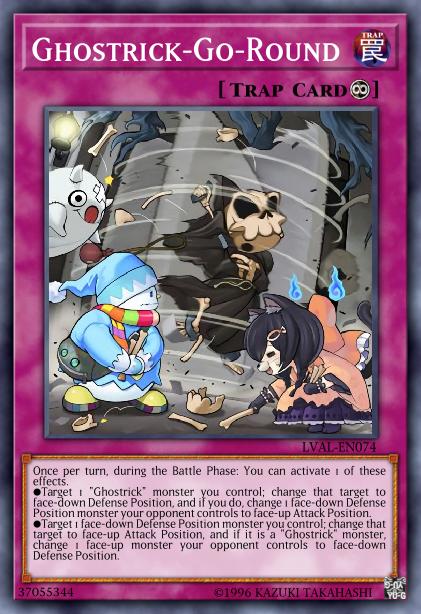 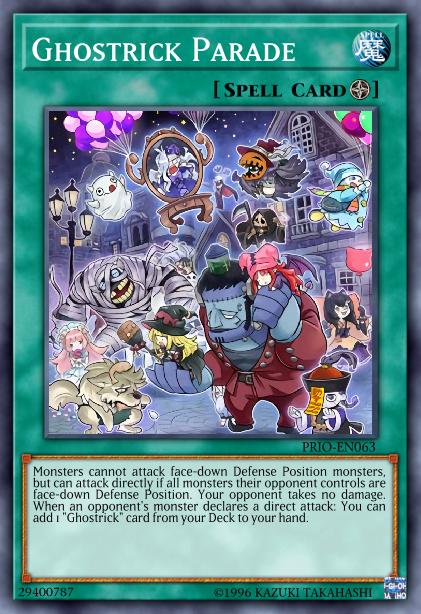 As already mentioned, the Field Spells give you some protection as you steadily build up a board. Ghostrick Mansion has the added benefit of halving any damage you take, while Ghostrick Parade lets you search. The best targets for Parade are usually the handtraps, Ghostrick Mary, Ghostrick Lantern or Ghostrick Jackfrost. They ease the damage by blocking a following attack and help bolster your field in the process. Another card that mildly annoys the opponent is Ghostrick-Go-Round. You can simultaneously double dip on your flip-effects, and stop attacks!

The Wincondition Is Playing Hide And Seek 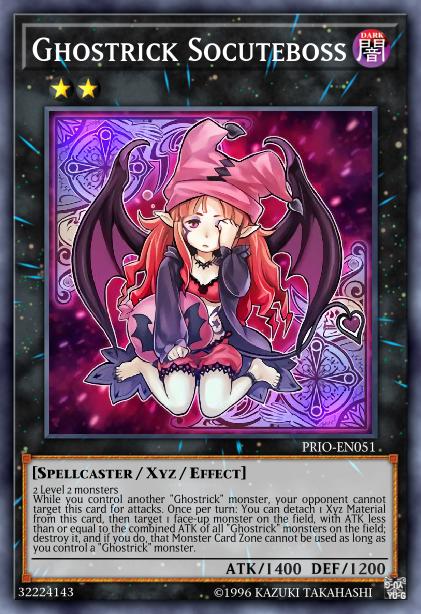 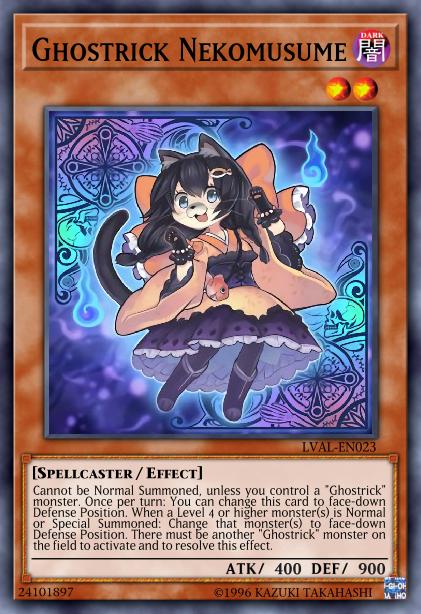 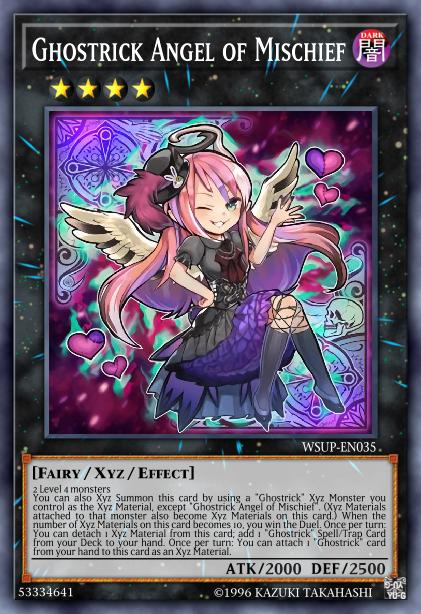 So, your opponent went afk and you actually got the initiative, but what now? For one, we've got the constant stream of value in the following 5 cards:

With their help, you can direct your efforts to lock your opponent out of the game, in one of two flavors. First off, there's Ghostrick Nekomusume. When accompanied by another Ghostrick, it flips down any Level 4 or higher your opponent wants to Summon. Now all you need is Ghostrick Night, and the opponent might just be unable to play the game at this point. Drawing into this combo naturally isn't the most consistent, which is why it's nice to have a Spell/Trap searcher in the form of Ghostrick Angel of Mischief.

To adequately prepare for the lockdown, it's advised to prepare a Ghostrick Scare or Ghostrick Doll for your opponent to attack. Remember to not flip the Doll on your own turn though, otherwise Nekomusume won't be face-up to stop any new Summons! Now the Field Spells can also be used offensively, as your opponent also fulfills the conditions of only having face-downs.

Option two is defined by an Xyz Monster, Ghostrick Socuteboss. It's not as explosive in comparison, as you need to wait for the once per turn effect to block a Monster Zone. With two of them that makes four blocked zones, rendering your opponent out of (most) possible Xyz and Synchro Summons.

If that's still too fast for you, there's another wincondition attached to an Xyz Monster: Ghostrick Angel of Mischief. All you have to do is give it 10 Xyz Materials. By giving it a Monster from your hand. One. By. One.

At first glance, this looks like one of the Loaners from the Limit 1 Festival that took a wrong turn. So many one-offs paired with the needlessly long texts, make this deck anything but beginner friendly. Let's divide this deck into the three Summoning mechanics to gain some clarity. 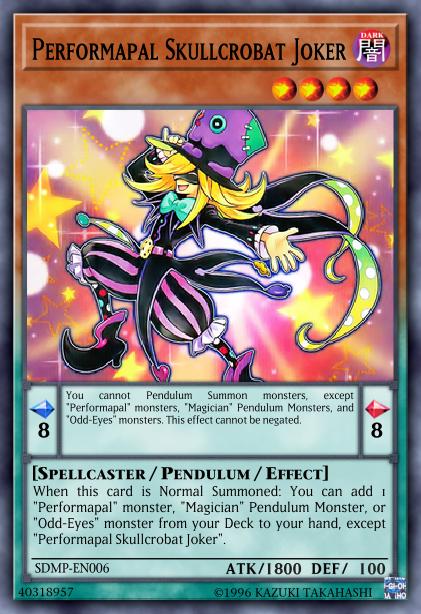 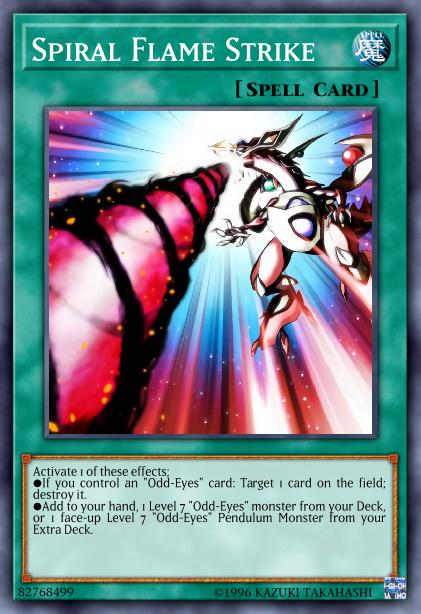 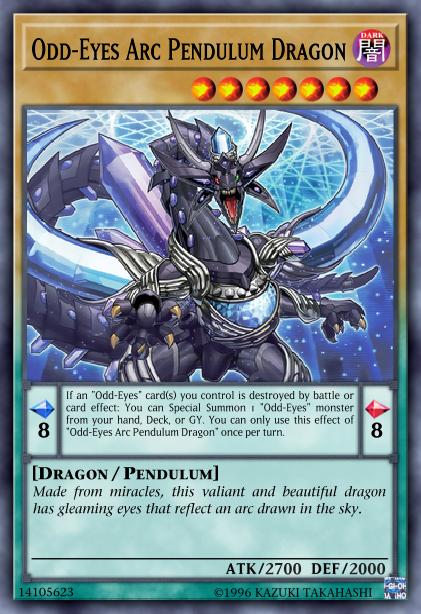 Starting off with the searchers for the ideal Pendulum Scale.

To make the most out of this variety of archetypes, we need at least 8 as our upper Scale, and 3 on the low end. Effectively, that makes Odd-Eyes Arc Pendulum Dragon and Xiangke Magician the choices with the best utility. One thing to remember is the fact that Pendulum Monsters used as Xyz Materials end up in the GY, which leaves it out of reach for you Pendulum Summons. Another fairly basic tip is to avoid the Extra Monster Zone with your Synchros and Xyzs. It's important, since Pendulum Summons from the Extra Deck can only be placed on there. 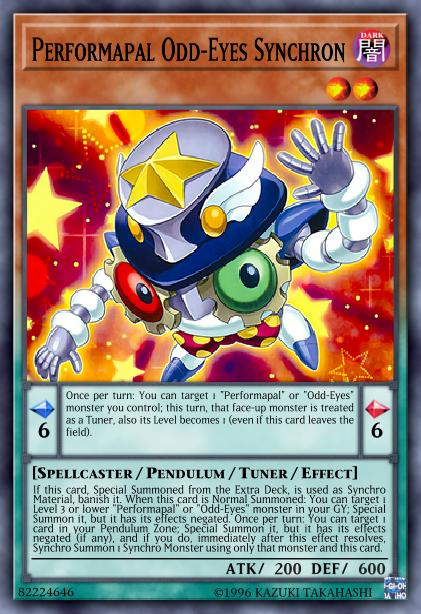 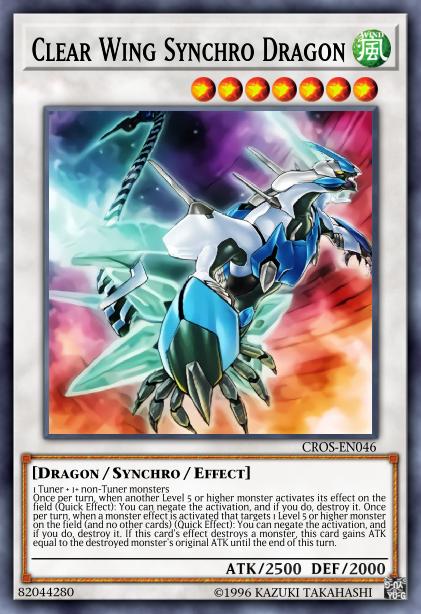 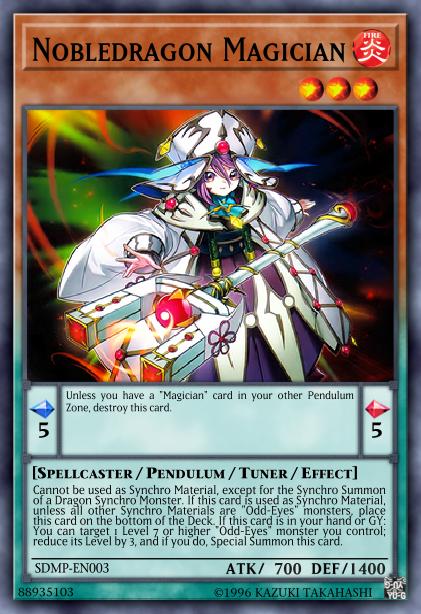 One step at a time, let's first take stock of the available Tuners. The most versatile one is Performapal Odd-Eyes Synchron. Not only can it Summon non-tuners to help it out, but also be used to turn other Monsters into Level 1 Tuners by placing itself in the Pendulum Scale. Its own Level isn't the best though, as only Stargazer Magician is a Level 5 to access the 2 + 5 = 7 line of play. A more straightforward alternative is Nobledragon Magician. It Summons itself and gets a Level 7 Synchro going as long as you control one of the Level 7 Odd-Eyes.

Lastly, Harmonizing Magician can be Pendulum Summoned and then combined with Timegazer Magician for the same kind of result. As it turns out, Level 7 Synchros is pretty much all the deck has available. The exception is Odd-Eyes Wing Dragon, which, besides having a nothing salad of a name, also has a tough Summoning condition. It pretty much requires a doubled Synchro Summon, alongside the Synchron's Pendulum effect. At least the effects aren't all that bad for the effort it takes. 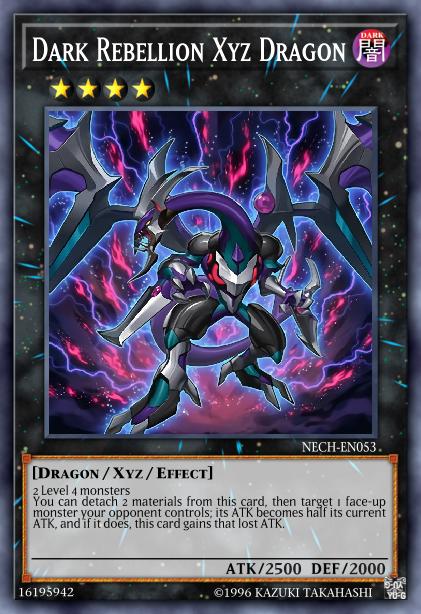 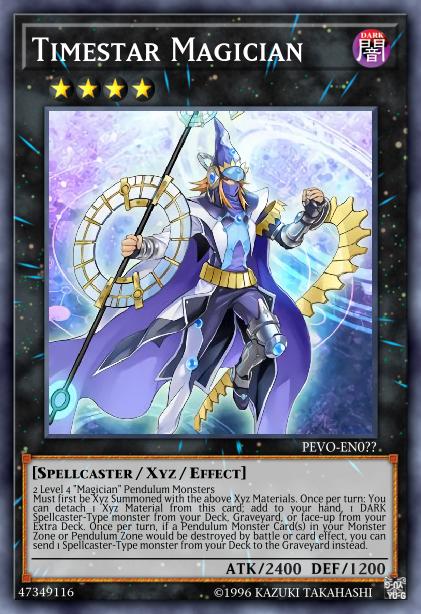 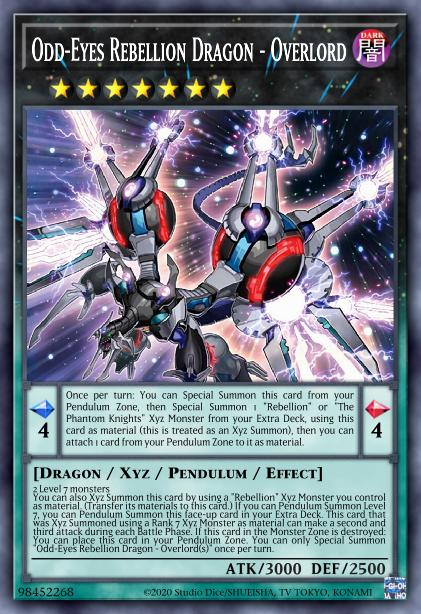 The selection of Xyz Monster gives you a wider array of Monsters to consider. For Level 4s, there's Dark Rebellion Xyz Dragon for general aggression, whereas Timestar Magician enables searching and protection. One weird inclusion is Arc Rebellion Xyz Dragon, one of the many upgraded forms of the Rebellion Dragon. The standard way of Summoning it would be Raider's Knight. That's nowhere to be seen though, so what gives? It genuinely seems impossible to Summon, even without the bonus effect.

Moving on to the Level 7 lineup, Odd-Eyes Absolute Dragon is the safest play for the first turn, hanks to its attack negation followed up by Summons, and even more Summons upon removal.

The others are... a bit interesting. All of them need to be Summoned using another Xyz Monster to gain their full effects, but two of them don't have an effect for that. What does work, is using the Pendulum effect of Xiangke Magician. With that in mind, these Xyz Monsters might as well read as "3 Level 7 Monsters, IF you have Xiangke Magician". At least that's how Odd-Eyes Rebellion Dragon and Odd-Eyes Raging Dragon gain their additional effects. Once you are done blowing stuff up with them, Odd-Eyes Rebellion Dragon Overlord can then be overlayed once more, to close out games.

Dark Blade Looming Over the Swordsoul 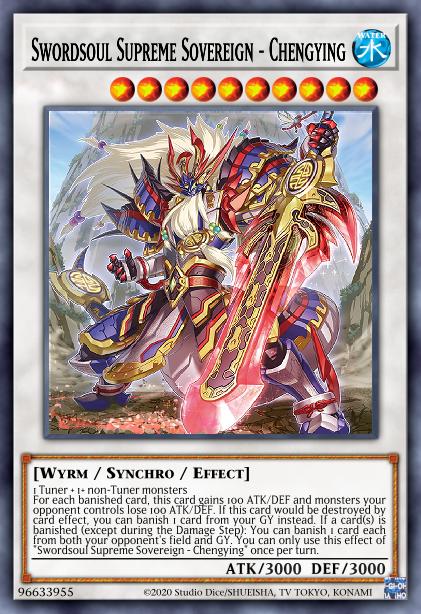 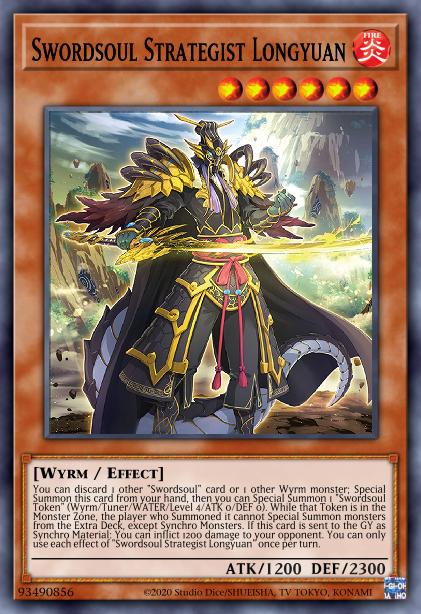 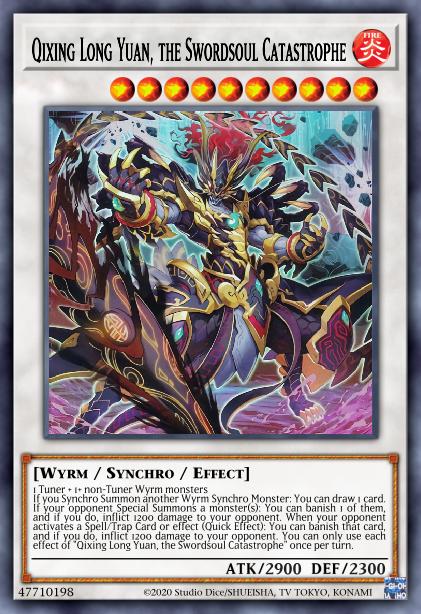 At the forefront of the strongest Synchro decks, we've got the Swordsouls. However, what we see here isn't the same kind of ultra-consistent meta threat from a few months ago. The lack of Tenyi Links and the classic Halqifibrax + Auroradon combo significantly lower the power-ceiling. Regardless, the core cards of Swordsoul of Mo Ye, Swordsoul of Taia, and Swordsoul Strategist Longyuan are strong as ever. You can read more about their potential synergies and plays in our Introduction Guide and Combo Guide. The first sections are contained within the archetype, which also applies to the Loaner deck.

One new addition is Swordsoul Sinister Sovereign - Qixing Longyuan. Besides having the cool initials going by "SSS-QL" (also known as "Triple S, Quextra Large"), it's another Level 10 to go into. Though Swordsoul Supreme Sovereign - Chengying still has the potential to be comboed with a Swordsoul Blackout for easy banishing, Triple S can be considered the better of the two, standalone.

This version of the deck definitely has some need for improvements. The remaining Swordsoul Main Deck Monsters are here just to honor their name, without providing much help. The same goes for Swordsoul Assessment and Swordsoul Strife. Another funny inclusion is Yakusa, Lord of the Eight Thunders (Because it's a Wyrm??). Also, Chaofeng, Phantom of the Yang Zing can't be Summoned the usual way, as there are no Level 1 Tuners. A generic Level 9 would've been too much to ask for.

What's your take on the Loaner Decks? Will you bore your opponents to death using Ghostricks? Share your opinion down in the comments!