It might come as a bit of a surprise, seeing as how it only launched globally less than a month ago, but MARVEL SNAP has been nominated for Best Mobile Game at The Game Awards!

Put That On Your Resume

The game has been in beta since May, so it's not nearly so young as it appears at first blush - and if you think that a less-than-a-month-old game shouldn't be garnering nominations so soon after a majority of the population got a chance to play it, then you definitely shouldn't check the Game of the Year Nominees, with week-old God of War: Ragnarok holding court (a nomination it deserves, by the way).

Second Dinner seems pretty stoked about the whole thing, tweeting this out:

Woah!!! @MARVELSNAP is nominated for Best Mobile Game at @thegameawards

We're double humbled to have our first-ever game nominated; and be on a list with games we love and studios we respect! ❤️

While it is technically the studio's first game, we feel like we should point out that Second Dinner is stacked with industry veterans who were recruited by Ben Brode to the company, and this nomination is a nice bit of recognition for the expertise on display in MARVEL SNAP.

What About the Competition? 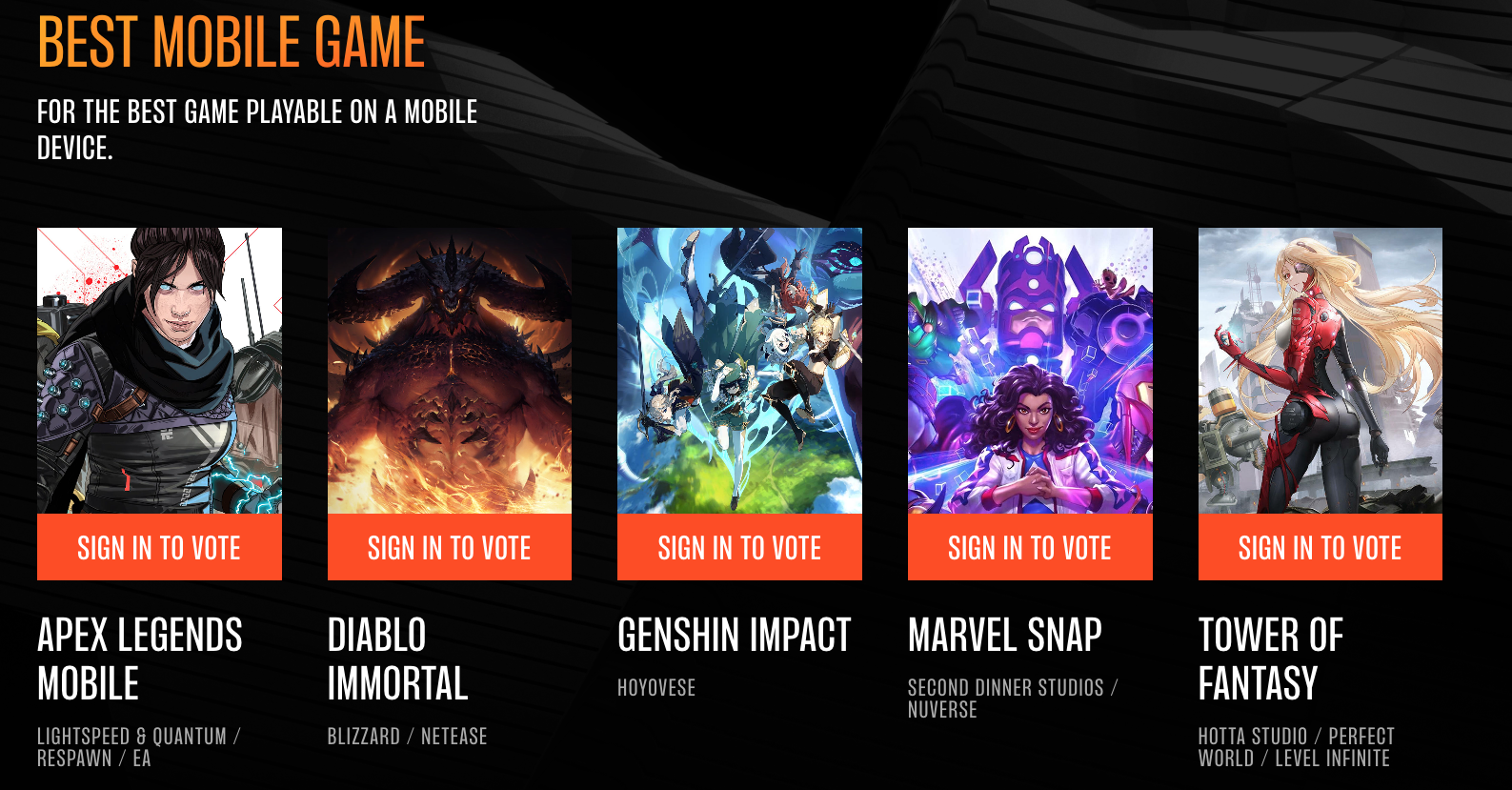 The question you may be asking is, "Does MARVEL SNAP stand a chance? Who is it going up against?" As stated in Second Dinner's above tweet, the field is stacked with popular games and powerful studios. Here's a quick refresher on the games SNAP will have to best if they want to take home the hardware:

Apex Legends Mobile - The battle royale/hero shooter that originally came out in 2019 has slowly carved a successful niche within its genre. The mobile port launched worldwide in May 2022, and is technically a different game since it runs on Unreal Engine 4 and doesn't support cross-play with the console version.

Diablo Immortal - Blizzard's most recent foray into mobile gaming, Diablo Immortal's release this summer was met with a storm of internet backlash based mainly around what was seen as a predatory and unrealistically expensive monetization model. Its gameplay, meanwhile, has had a more positive reception.

Genshin Impact - The popular open-world ARPG that first launched in 2020 is a three-time Best Mobile Game Nominee at The Game Awards, taking home the award in 2021. It has also twice been nominated for Best Ongoing Game. Genshin Impact is the only game in this field that launched before 2022.

Tower of Fantasy - Another open-world ARPG that launched worldwide in August. Despite its name, Tower of Fantasy's world is more of a dystopic sci-fi realm, which could set it slightly apart when it comes time for the inevitable Genshin Impact comparisons.

It's An Honor Just To Be Nominated

MARVEL SNAP, as the only card game in the competition, could garner enough votes to win Best Mobile Game on December 8. Whether it does or not, the nomination by itself is a sign that people have noticed Second Dinner's work and are willing to give it some attention, which could be good for the health of the game as it heads into the new year.

However, if you think it should win, make sure you go to the page for Best Mobile Game and give it a vote.

Are you going to tune in to see if MARVEL SNAP can win it all*? What is your opinion of its competition this year? Share your thoughts in the comments!

*Editor's Note: Technically, MARVEL SNAP cannot "win it all," as it is only nominated for Best Mobile Game.