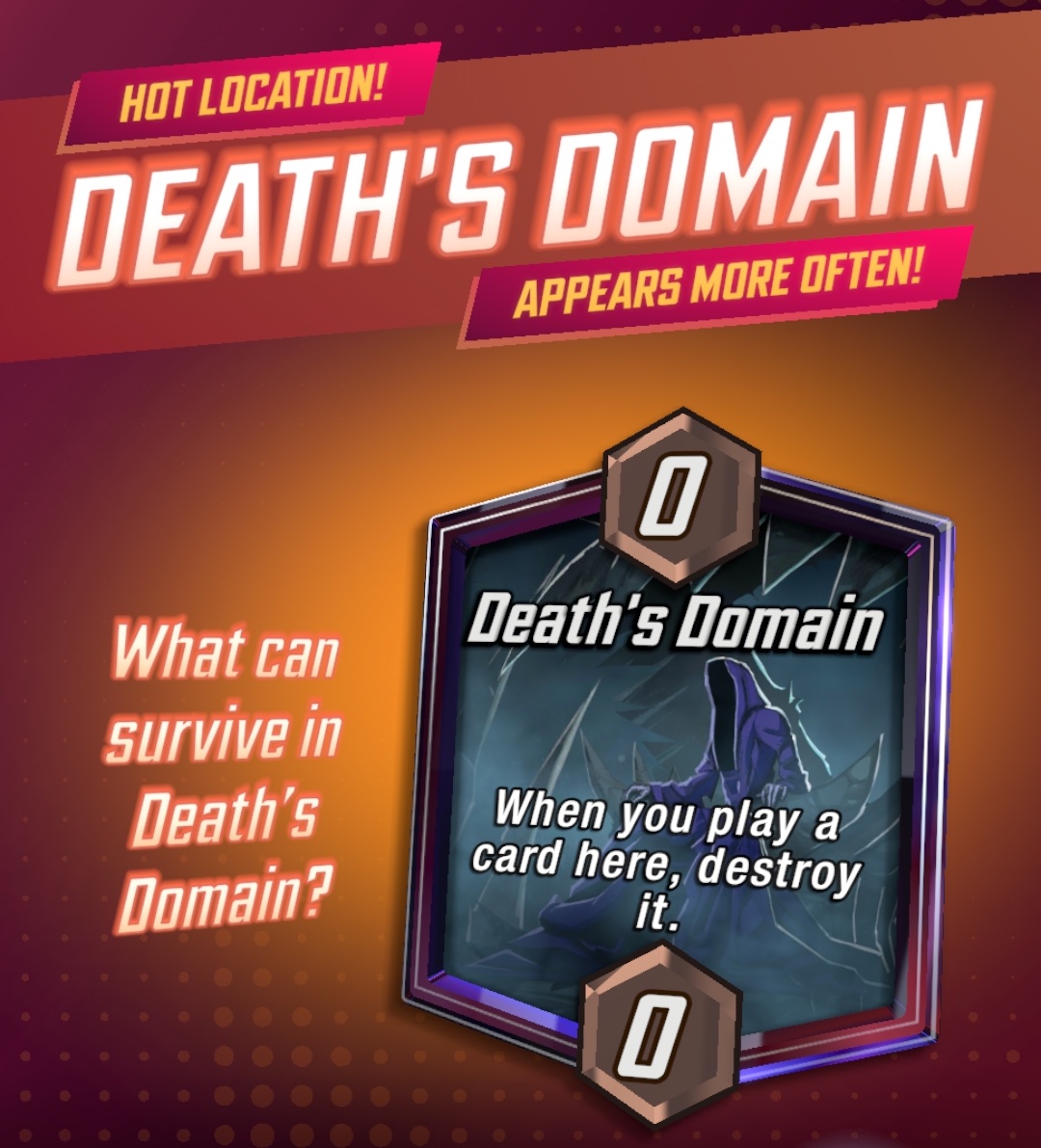 Death's Domain does what it says on the tin: any card played there will be destroyed. So if we want to get into the Underworld, we're going to have to be a bit sneakier. Movement cards like Iron Fist and Vision are one way of getting our cards there; another option is cards that summon other cards, like White Tiger. In Pool 3, Arnim Zola can get one of your cards safely* to Death's Domain by killing it - that's a flavor win in our book. If none of that sounds like your jam, you can run Armor to protect your cards from the location's effect.

However you choose to plan for the Hot Location, you'd better get used to it; being a Hot Location means that Death's Domain will have a 60% chance to appear for 24 hours, from 7 PM PT Saturday night to 7 PM PT Sunday night (2 AM UTC Sunday to 2 AM UTC Monday). 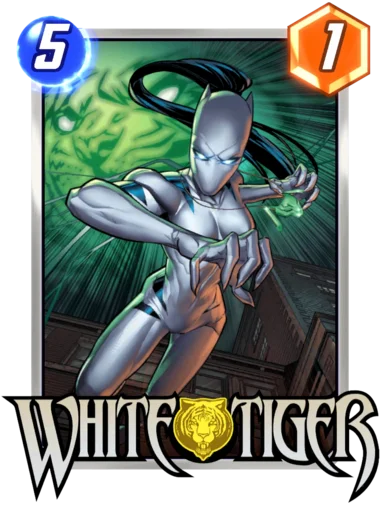 On Reveal: Add a 7-Power Tiger to another location. 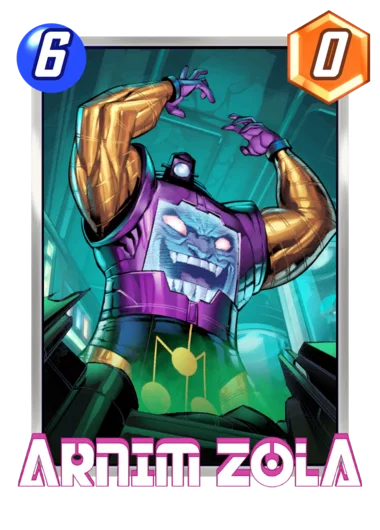 On Reveal: Destroy a random friendly card here; add copies of it to the other locations.

We're not just going to give you some vague pointers about what cards you could run at Death's Domain; how about some actual decks to try out? We've got decks for players lingering in Pool 1, advancing into Pool 2, or reaching the peak of Pool 3.

This Pool 1 deck builds to a late-game White Tiger and Odin combo to fill up Death's Domain while filling out the rest of the locations with its smaller cards. We're also running Iron Fist to push a big body like Jessica Jones into the Hot Location - just remember that her On Reveal effect is watching the original location she was played to, not Death's Domain. If you're just not feeling the Hot Location, there's an Armor to turn it off.

Move is one of the decks that's nearly tailor-made for Death's Domain (we'll get to the other in a moment). Thanks to Iron Fist, Vision, and Heimdall, it can get into that location with almost no problem. At worst, you might have to sacrifice Doctor Strange to move in your Vulture, but he knows it's the only way.

Destroy decks are going to love the Death's Domain Hot Location, since it lets them get up to some serious shenanigans. In Pool 2, those shenanigans involve destroying Sabretooth, then copying him with Moon Girl. There's also an Angel to move into Death's Domain after playing a Sabretooth or Bucky Barnes there, and a White Tiger, just in case.

Pool 3 is where Destroy shenanigans get ramped up to an eleven, mainly thanks to Deadpool, who is going to get very big after being played over and over to Death's Domain, after which he can feed Venom and lend some Power to Taskmaster. Death feels right at home with the Hot Location - it is her Domain, after all.

Second Dinner's Tian Ding shared this Black Panther list the other day, and, since it's got a lot of cards that play well with Death's Domain*, we're featuring it here. Arnim Zola, as previously mentioned, is great for sneaking your big bodies into Death's Domain (with Black Panther being the preferred target). White Tiger shows up yet again, and the deck also runs Storm in case you're worried the other locations are too easy to get into. If all else fails, a Jubilee sacrifice to Death's Domain could save the day.

*Because it wasn't optimized with the Hot Location in mind, we would consider adding Electro in place of Juggernaut; you can play Electro to Death's Domain and reap the boosted Energy while immediately getting rid of the drawback.

Have your own strategy for capitalizing on the Death's Domain Hot Location? Share your thoughts (and decks) in the comments!