Among all the other novelties coming to the game, Hearthstone is also getting a round of balance changes with Patch 25.0. This isn't really a big piece of news, as both of these changes were leaked almost a month ago due to an unfortunate gallery update on Hearthstone's official site.

In particular, this balance patch is going to prepare the ground for Death Knight's introduction, therefore addressing existing cards that would've been problematic with the new ones or that were already causing trouble and therefore got adjusted. Here are all the nerfs, which go live on Tuesday, November 29th:

If we have to be honest, we think that Sire Denathrius is missing on the list: this card is too generally good of a finisher and too easy to Infuse. While it gives many decks a win condition they wouldn't normally have access to, there are some cases where it's more than oppressive, especially in combination with Brann Bronzebeard. There's an in-game patch planned two weeks into the new meta, so we hope that, if Sire Denathrius will be too prevalent even with the new cards available, Team 5 will decide to step in and operate a (deserved at this point) change. Our suggestion? Same effect, but Denathrius should endlessly Infuse by 2 instead of 1.

Dev Comment: The release of a new class is an incredibly exciting moment for Hearthstone players everywhere, and a moment that we want to be as enjoyable and accessible as possible. Knowing the importance of this new class release, our plan with Theotar was to test out a smaller change to the card (from 4 to 5 mana in Patch 24.4.3) before potentially moving for a larger change if necessary. Theotar’s play rate did not drop as far as we would have liked it to with the smaller change, and is still higher than we would like it to be leading into March of the Lich King. Our aim with this second change is to lower the card’s play rate to ensure that the release of Death Knight is as fun as possible for players with a wide variety of interests and experience levels.

Dev Comment: The nerf to Ice Revenant might appear out of place, but it feels like a necessary one in a world where Death Knight has access to multiple cheap Frost spells (like Horn of Winter). In testing, we were frequently seeing Ice Revenants at game-ending sizes as early as turn 4, and the card was simply overshadowing many of the new and exciting things in the set.

As usual, all the aforementioned cards will be eligible for a dust refund, which will not start before the patch goes live: do not disenchant those cards yet!

In the following article, we're going to discuss the implications of these changes and what they could mean for Constructed. 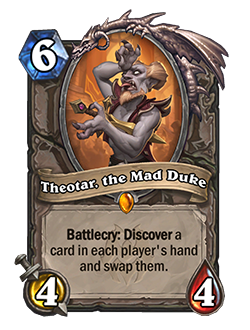 Imagine releasing a new class, with neat Legendaries and powerful effects, only for them to be stolen by Theotar, the Mad Duke. Not that cool of an experience, right?

Nerfing Theotar because of Death Knight makes sense especially if you think about the Rune system. Let's make an example: You're playing triple Blood Death Knight because you want to have some Alexandros Mograine shenanigans. In order to get there, you're forced to give up on many powerful Frost and Unholy cards (Defrost, Plagued Grain, Blightfang, Remorseless Winter: the list could go on, but you get the point); you queue a game and you're matched against your average greedy opponent, playing Theotar and stealing the Alexandros. Definitely not cool.

Theotar, the Mad Duke already saw a drop in both playrate and played winrate after its first nerf, but increasing its cost once again seems like a reasonable call by Team 5: in the end, we are sure that the devs regretted introducing this much disruption into the game. 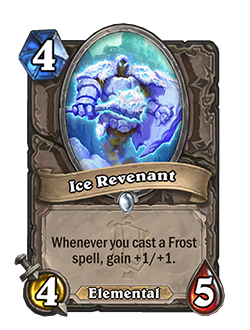 Clear example of a preemptive nerf. If you think about it, Ice Revenant saw very little play in Elemental Frost Shaman right after Fractured in Alterac Valley was released (trying to capitalize on the Windchill package), but fizzling away during the following weeks.

Why was Ice Revenant deemed dangerous to the game with the introduction of Death Knight? We'll give you a single card: Horn of Winter. We are sure that, during development, Team 5 recorded games where Frost Death Knights would play Ice Revenant on 4 or coin it out on 3, play Horn of Winter and possibly other Frost spells like Icy Touch or Frost Strike, generating an enormous wall of stats which would've ended matches by itself, with very little counterplay.

There's the chance that Ice Revenant might still be relevant after December 6th, although halving its effect doesn't make us particularly confident. Let's put it this way: an almost unplayable minion took the bullet for us to get a new Hearthstone class - we think it's a winning deal.

What do you think about these nerfs? Are there any other cards you would've liked to see hit?