And so it came to pass, Sire Denathrius has just been murdered! This time for real. Only an expansion later - whether it actually proves to be enough to remove him from the equation (i.e. being literally everywhere), remains to be seen. None of the Castle Nathria suspects were actually capable of performing the dirty deed, it took the arrival of ominous Death Knights and the powerful Lich King to make it happen. Merciless justice delivered. By a ricochet, the newest Hunter card Shockspitter has also received a swift nerf.

A data-only patch means that a small download will be necessary, both for desktop and mobile clients. However, this does not require any mobile storefront approvals - you will notice an immediate update taking place right upon entering the game. You may not be able to resume playing until this process is completed.

Sire Denathrius might have had it coming for a longer while, as players were raising red flags even during the previous pre-launch events: from the early preview at Death Knight Showmatch to various Theorycraft Streams. That's also how we knew something might eventually happen, as some time ago Hearthstone Final Design Team noted how they were keeping an eye on the card's power level (and even on Prince Renathal, actually - like "father", like "son"). And they also did promise to react as needed, "at least 5 days before" the opening of the upcoming Hearthstone World Championship. Well, there you have it.

The change to Shockspitter isn't terribly surprising either, as it has been an early standout card for Hunters everywhere - as you might've noticed from our March of the Lich King Launch Decks compilation. What's perhaps more interesting here is that Druids and Rogues (plus Discard Warlocks in Wild) did get away with no immediate nerfs for the time being.

Dev Comment: We set up this balance window to address any changes we wanted to make immediately after the expansion launched. Shockspitter is exactly that type of card, ending games sooner, more easily, and more consistently than we intended. Sire Denathrius is a card we have had our eyes on for some time, but we wanted to see how he performed in the new expansion first. With a couple days of data, we can see that it is still a very popular and polarizing card, warping early meta development in a way we want to address before the World Championship (December 16-18).

This balance update was reserved for only the most standout cards immediately after expansion unlock. We’ll continue to keep our eye on how the metagame develops and make any further adjustments needed in our next balance window, reserved for a few weeks from now. 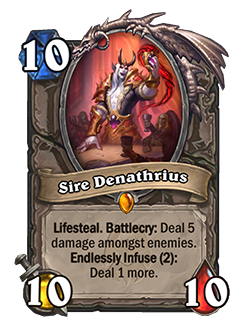 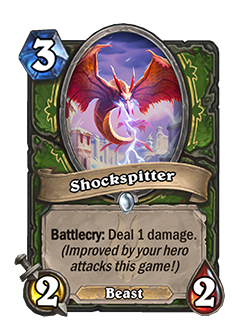 The above craftable cards will be eligible for a full dust refund for two weeks following Patch 25.0.3. As a reminder, regular Sire Denathrius was a free card and can’t be crafted or disenchanted.

Sire Denathrius Achievement Fixed, Back to Being Free

New and returning players who skipped the entire Murder at Castle Nathria Rewards Track were actually unable to easily claim their free copy of Sire Denathrius anymore following the launch of March of the Lich King on December 6 - an issue that became known as soon as Patch 25.0 happened at the end of November (with the uncraftable expansion cards being moved as prizes onto their corresponding achievements, in lieu of the former XP bonus). So now they get to enjoy this somewhat depowered version along with everyone else.

You won't currently find this listed in the published patch notes, but it would also appear that certain two cards - Grim Patron and Gruntled Patron, respectively - have been stealthily banned from the game, which is only meant to act as a temporary measure. The reason? A very particular and awful interaction with the new Death Knight card Corpse Explosion, resulting in "semi-infinite" gameplay animation loops (there was an ultimate cap in place). This has been initially reported by several players as they later shared the egregious deck, and most recently captured on video by RegisKillbin.

We're also aware of the interaction between Grim/Gruntled Patron and Corpse Explosion. Even if it's not overpowered, it's a poor experience, so are considering possible changes. In the mean time, we've temporarily banned Grim Patron and Gruntled Patron from play in Ranked.

Well, it was also certainly a great setup for "endlessly" infusing one Sire Denathrius. Still available in Duels, by the look of things.

Update: Okay, so that did not last long. Team 5 have apparently changed their minds and went with something else later on, deciding there will be "no Corpses for you" instead:

Heads up! Grim Patron and Gruntled Patron will be unbanned in a new hotfix that will roll out today. Both minions will no longer leave Corpses. This will address the unintended interaction with Corpse Explosion. More updates to come!

(This is not the final solve for this interaction, still temporary, just better to leave it this way instead of totally banned for the moment. Hoping to get a more final fix out next week that preserves both cards' functionality, without going infinite.)

We will keep you posted as this little saga continues to unfold. 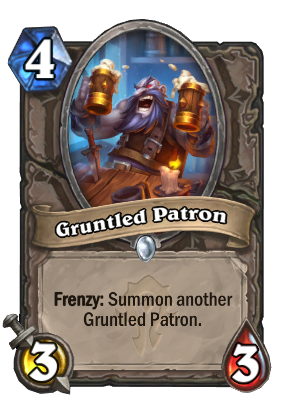 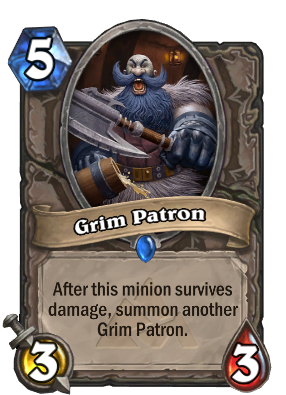 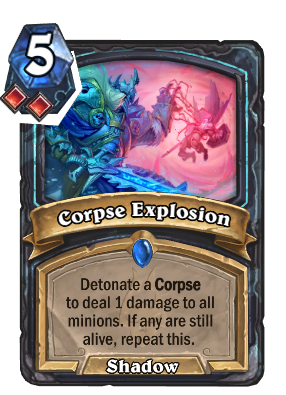 Just get outta here, everyone.

The Sire is dead, long live the Sire? As in, hail the one and only Lich King!