Dean Ayala recently announced that the Hearthstone team was looking to unnerf 10 cards that had previously been nerfed - 5 from currently Wild expansions, 4 from Year of the Raven expansions that will rotate soon, and 1 from the Year of the Dragon. Those exact numbers aren't final, but we should still expect a fair few cards to be restored to their former glory. As such, we've taken a look at all the potential candidates and selected a few of our favourites that we want to see get unnerfed.

For completeness sake, here's a list of every card* that could see a reversion in the update.

*This list includes every card which was explicitly listed as nerfed by Blizzard. Cards affected by mechanics changes, like Jungle Giants, or cards that were changed but not acknowledged as a nerf, like Lynessa Sunsorrow, have not been included.
**Both these cards were buffed and then reverted to their pre-buff state; while not technically a nerf in the same way we would consider the other cards, they've been included for completeness sake. 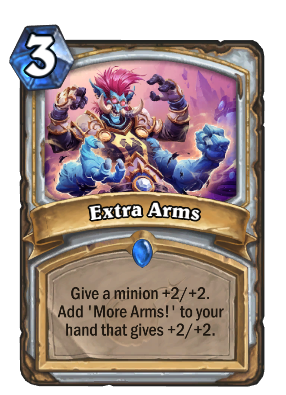 I'd love to see this thing back at 2 mana. At 3 mana, it was just a laughing stock and we all knew that it would happen. When it was buffed to 2 mana, everything changed. The card was actually seeing play and it was great. I remember being a bit disappointed when it was nerfed back to 3 where it would see more play than it did before, although ultimately going back to its former status. Put this thing back at 2 mana.

How Long Can This Go On? 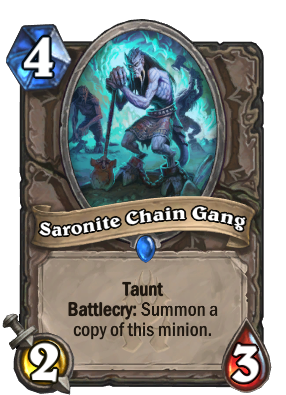 Ah, Saronite Chain Gang. A very interesting card nerfed for the sins of one of my favourite cards, Shudderwock. Interesting hand-buffing strategies fell under the weight of infinite freezing and/or damaging Shudderwock combos, utilising now-Wild fun like Grumble, Worldshaker.

Not that those Shudderwock combos were ever particularly powerful - I'm fairly certain they were sub-50% and even sub-40% winrate for the majority of their brief time in the sun. They just fall into that obnoxious 'unfun to play against' category that is a fair if annoying reason to change something.

Wild is a different story, however. How do we know that? Why, because Doppelgangster exists there and Wild has yet to implode due to the oppression of Shudderwock Shamans. Give us back those interesting interactions with Saronite Chain Gang in a mode that won't suffer for a bad, silly combo.

In Spite Of Everything... 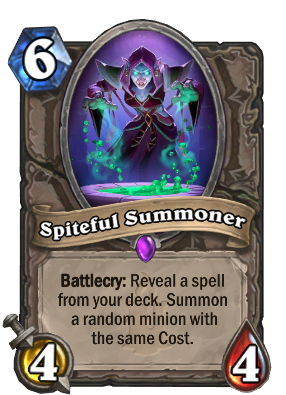 Spiteful Summoner was probably one of my least favorite cards back when it was at 6 mana. Being able to play a card as early as turn 5 in most cases to get a massive minion would often close out the game on its own. However, in wild it is a different story now. While the high roll potential is still there for sure, wild not only has more ways of dealing with large minions but also has a wider variety of bad minions Spiteful Summoner can hit. Combine with the heavy deck restriction that you cannot run cheap spells and it turns Spiteful Summoner into a deck defining card to one that even when the plan goes well, often will just whiff and disappoint. Because of this, I believe Spiteful Summoner to be a great candidate to be unnerfed as it will breathe life into a dead archetype without pushing the envelope too much. 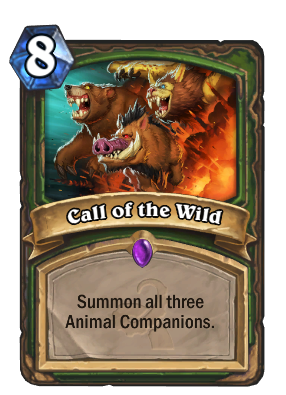 I love Hunter. Back in WotOG, this card at 8 mana was the absolute bread and butter of the class. Every Hunter ran it, sometimes even Face Hunter just because if you got to 8 mana as Face Hunter, the card was really just that good. When an 8 mana card warps Hunter decks to include two copies of each, you know that it's insane, and Call of the Wild was indeed insane.

At 9 mana, it basically stopped seeing play and just kinda disappeared. I'd love to see this thing unnerfed and with how much the game has grown in power (looking at you, Ultimate Infestation), I don't believe it would be as strong at 8 now as it was then, but I do believe it would be playable.

Top of the Totem Pole 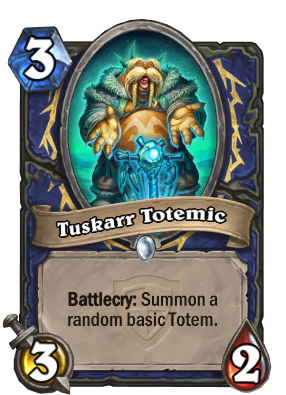 I think this guy could deserve to be reverted to its original self. Back in a day, this was a huge power play, if you could get a Totem Golem out of it, but nowadays, it doesn't seem that much different from other RNG swing cards. There are also three new Totems that were added since - Primalfin Totem, Serpent Ward and EVIL Totem - which further dilutes the pool. Would also make these cards see more play, as it is always the way with random effects, giving you cards you might not have put in your deck yourself, which is cool!

I guess one could argue that while adding new Totems can dilute the minion pool, which could keep this card in check, it could potentially also restrict the deisgn space, since making any big Totem would give too much of an early game swing, if rolled right. But are we, or rather should we, see any big Totems in the future? Things can of course change, but so far, Totems were being designed as small support effects to enhance play, not as big beefy punchers. So I think we should be quite ok in this regard.

Bow Down Before The God Of Death 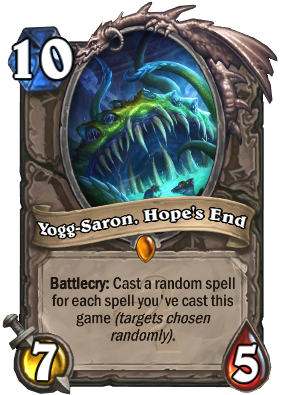 Nerfed from casting a random spell for each spell you've cast this game, to stopping when he leaves the Battlefield

The decision to nerf this card was the closest I ever came to quitting the game. I'm very glad that I didn't, but I always feel the need to mention that when discussing it. I'm really serious about how much I miss this card. It's my favourite legendary, and part of the reason I love Tortollans so much; Tortollan Primalist and Tortollan Pilgrim help scratch that same itch.

As it stands, post-nerf Yogg is nothing more than a panic button. You're losing the game? Alright, at least you can jam Yogg and hope for something to go your way. That's exactly the reason that they nerfed him, but in turning him from a pretty good panic button to a kind of meh one, they destroyed any fun the card had.

The point of Yogg was to build a deck of spell after spell after spell, all geared towards that final fantastic lightshow at the end. Where before Yogg was the Fourth of July Finale, now he's a single Catherine wheel that comes unstuck two seconds after you light it and flies into your face.

Ban it from competitive play; hell, ban it from the Ladder if you need to. Just give us back the fun of the card that you stripped from it.