A new month means a new Ranked Season for Master Duel! Unfortunately, for those that were hoping for some sort of revamp of the way ladder rewards are handled, we have some not so great news. 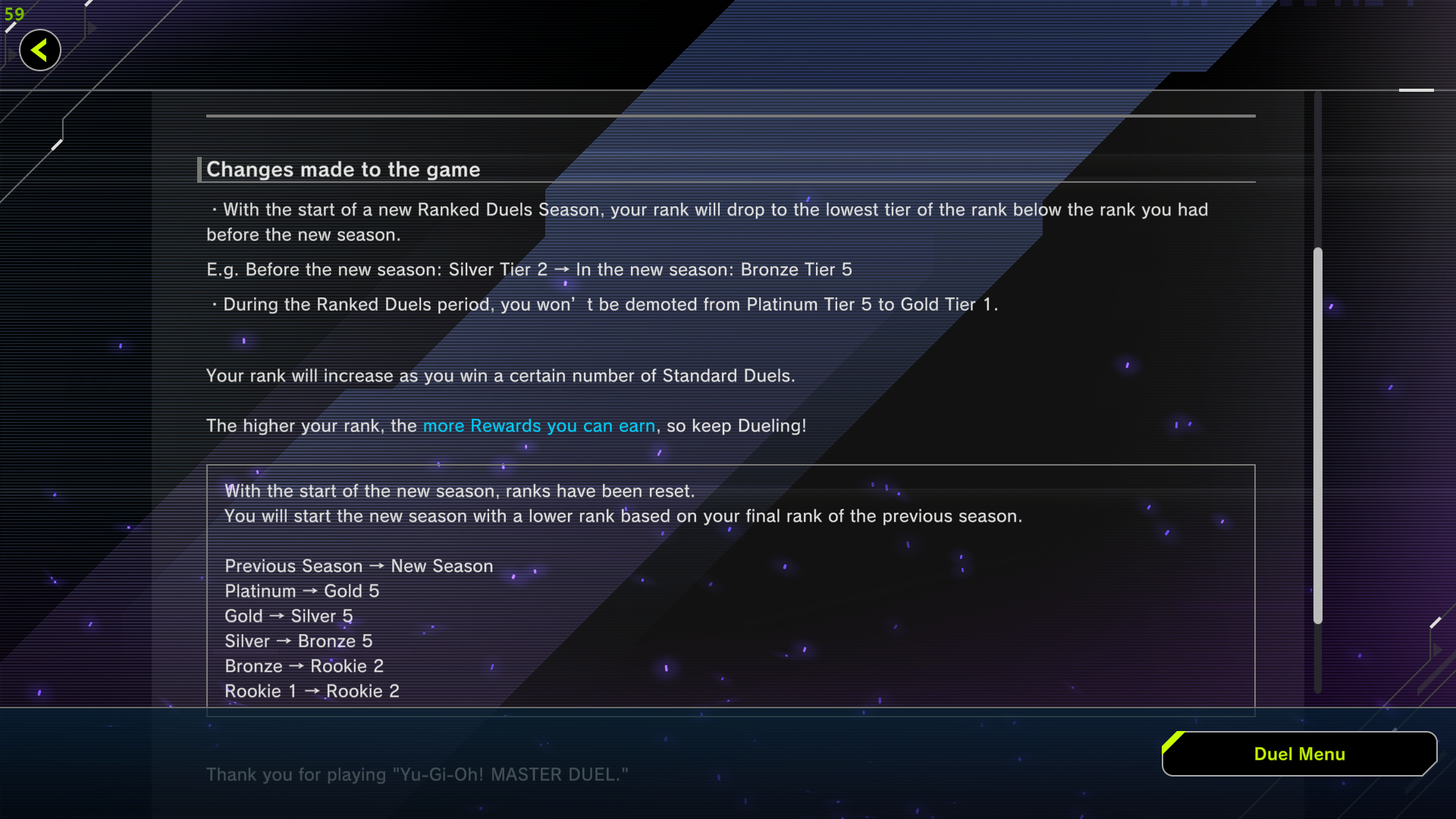 This new lowering is actually quite good for casual players. It means that you have access to 400 more gems compared to what you'd earn compared to the old model, assuming you don't reach Platinum.

Other than that, things are just about the same. Any rewards that are bellow your current rank are inaccessible, and, unlike last season, it seems like there'll be no compensation this time. This is a point of contention for a lot of players, and for good reason. Let's discuss it!

The Gems Are a Knightmare

Let's first start with how the rewards are given out. You earn Gems every time you reach a new Tier. They are given out as presented in the following table:

Basically, aside from Rookie, each Rank has 600 Gems available. If you start off in Silver V, and climb all the way to Gold I, you'd get 1000 Gems (you don't get the ones from Silver V where you started).

Now, here's where the point of contention for many players is: The higher you climb in a season, the fewer rewards are available to you in the next season. So if you finish in Platinum, and then get down to Gold V, you'll only be able to earn 1000 Gems that season, while someone that finishes in Gold would theoretically be able to get up to 1600 Gems.

Key word here being 'theoretically'. Here's the thing: If you get to Platinum I each season, every single season afterwards will always give you 1000 Gems. Same goes if you end in Gold I, and don't get into Platinum V, you got 1000 Gems that season.

Paradoxically, this system actually helps people who take a break from the game for various reasons. If you end the season in Platinum, then don't play the next two seasons at all, you'll get demoted to Bronze V the season after that. If you push to Platinum I by the end of that season, you'll have earned 2200 Gems. Of course, this is an extreme case.

That's not to say there aren't any flaws with the current reward system. First and foremost, those numbers make a lot of assumptions. If you're a player who usually ends the season in Gold, and you decide one season to push for Platinum, but can't get past Tier IV of that Rank at all, the following season will only see you earn at most 400 Gems, since you're now in Gold V and you don't want to climb to Platinum any more. And, of course, there's the issue that the current system encourages people to end the season on low ranks.

How do you fix this? There's no easy answer to this. The simplest one is just making the rewards for higher Ranks bigger, like 200 Gems/Tier for Silver, 300 for Gold, and 400 for Platinum, or something like this. But we're not Konami, so we can't tell how these numbers would affect things.

What about you? Do you think the current rewards system is fair? If not, how would you change it? Let us know in the comments below.