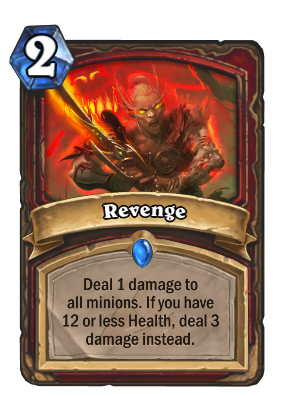 Deal 1 damage to all minions. If you have 12 or less Health, deal 3 damage instead.

This is better than Arcane Explosion, so I guess warriors are finally getting revenge on mages for Mortal Strike being worse than Fireball.

How to Unlock Revenge

Unlocked in Blackwing Lair, in the Blackrock Mountain adventure.

How to Unlock Golden Revenge

Crafting unlocked in Blackwing Lair, in the Blackrock Mountain adventure.