What is Counter in Hearthstone?

Hearthstone has many card effects that are common enough that they get their own keyword - a word or two that immediately tells you how the card works. Let's take a look at the Counter keyword.

A card that is Countered has no effect.

Counter is a very bizarre keyword. As it only appears on one card in the entire game, Counterspell, its inclusion as a keyword can leave some people scratching their heads. Unlike other keywords in most card games, Counter as a keyword actually does exactly what the English definition says it does, which may be why it's used as a keyword despite appearing on only one card. Another reason is that other Counter cards may have been in development before ultimately getting cut from the finished product. The fact that the tooltip mentions "card that is Countered" instead of "spell that is Countered" further reinforces this curiosity, suggesting it was intentionally left open for countering other card types.

Keywords that Work Great with Counter

Playing Against Counter in Hearthstone

Playing against Counterspell is relatively simple. Cast a low-cost spell and waste the trigger. As long as you cast a spell that costs less than 3 to trigger the effect, it can be argued that you gained mana advantage out of it. 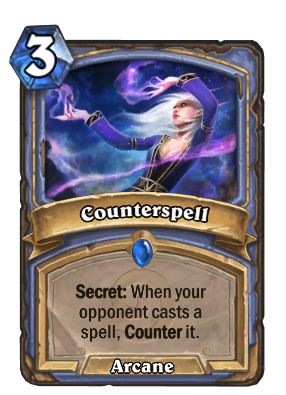 Counterspell is the only card in the entire game with the Counter keyword.