What is Quest in Hearthstone?

Hearthstone has many card effects that are common enough that they get their own keyword - a word or two that immediately tells you how the card works. Let's take a look at the Quest keyword.

Starts in your hand. Complete for a reward.

Quests are Legendary spells (the first of its kind) introduced in Journey to Un'Goro, and later brought back in Saviors of Uldum. Quests are 1 mana spells, and they always appear in the left-most spot of your mulligan with the option to toss it if you suspect that it won't benefit you in the matchup. After you complete the specified objective on the Quest, you will gain the mentioned Reward.

The Quests from Journey to Un'Goro are generally harder to complete (requiring more deckbuilding around the specific Quest), and reward you with a strong, powerful card. The Quests from Saviors of Uldum are easier to complete and more general in what decks can run them, and reward you with a new Hero Power. A twist of this mechanic also appears in Descent of Dragons in the form of Sidequests.

Quests cannot be generated from "outside the game" through card effects, but can still be copied through effects like [Hearthstone Card (Thoughsteal) Not Found]. In addition, you can only have one Quest active at a time.

Keywords that Work Great with Quest

As Quest decks typically try to survive long game to activate their Quest, keywords that work well defensively such as Taunt, Rush, or Lifesteal will help you survive the game and fulfill the Quest.

Playing Against Quest in Hearthstone

If your opponent is playing a Quest, it's extremely likely that they'll play it on turn 1. With this said, if you're familiar with the meta and what decks running a specific Quest would normally run, you can play a gameplan around your opponent's Quest. In the case of the Saviors of Uldum Quests which generate Hero Powers, tech cards that work against Hero Powers can help against them, although this inconsistent and will likely force you to run suboptimal cards. Activate the Obelisk in particular is very annoying to play around, but can be beaten by building a board and not attacking the enemy hero until you can push significant damage.

In Wild, it's possible to play Kabal Lackey into Counterspell on turn 1 to stop Quests completely (as Quests count as spells, and will thus be countered), although this is extremely inconsistent and unlikely to happen. This method can also be used to counter Quests which give spells as rewards (Open the Waygate, The Caverns Below, or Lakkari Sacrifice) 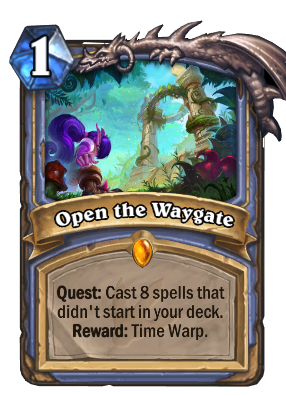 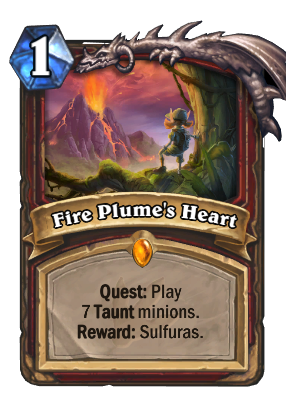 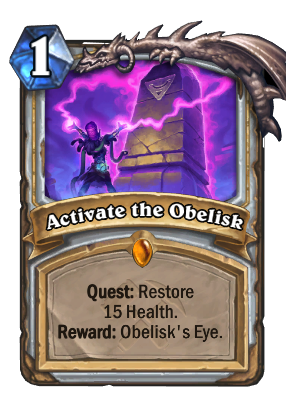 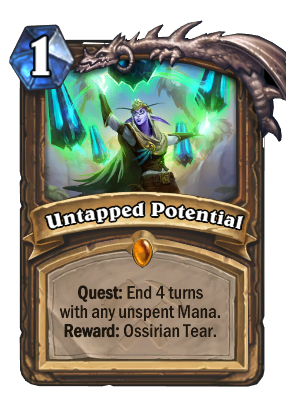 Open the Waygate is a strong Quest that is prominently used in "Exodia Mage" (named after the card, "Exodia the Forbidden One" from Yu-Gi-Oh, specifically in reference to requiring the player to hold a number of very specific cards in hand to pull off the combo). It rewards Time Warp to the player upon completing it, giving the player an extra turn, allowing a combo with Sorcerer's Apprentice, Molten Reflection, and Archmage Antonidas to infinitely generate 0-Cost Fireballs and kill your opponent.

Fire Plume's Heart is a Warrior Quest that rewards Sulfuras after playing 7 Taunt minions (naturally allowing you survive to gain the reward), which will replace your Hero Power to deal 8 damage to a random enemy.

Activate the Obelisk is a Quest from Saviors of Uldum, and will replace your Hero Power with Obelisk's Eye, and is generally considered one of the most annoying cards in the game to play against.

Untapped Potential is a Druid Quest which is particularly notorious as the reward, Ossirian Tear is extremely strong and the Quest is easy to complete as it simply requires you to end 4 turns with at least 1 mana unspent which is often something that normally happens in a game anyway.