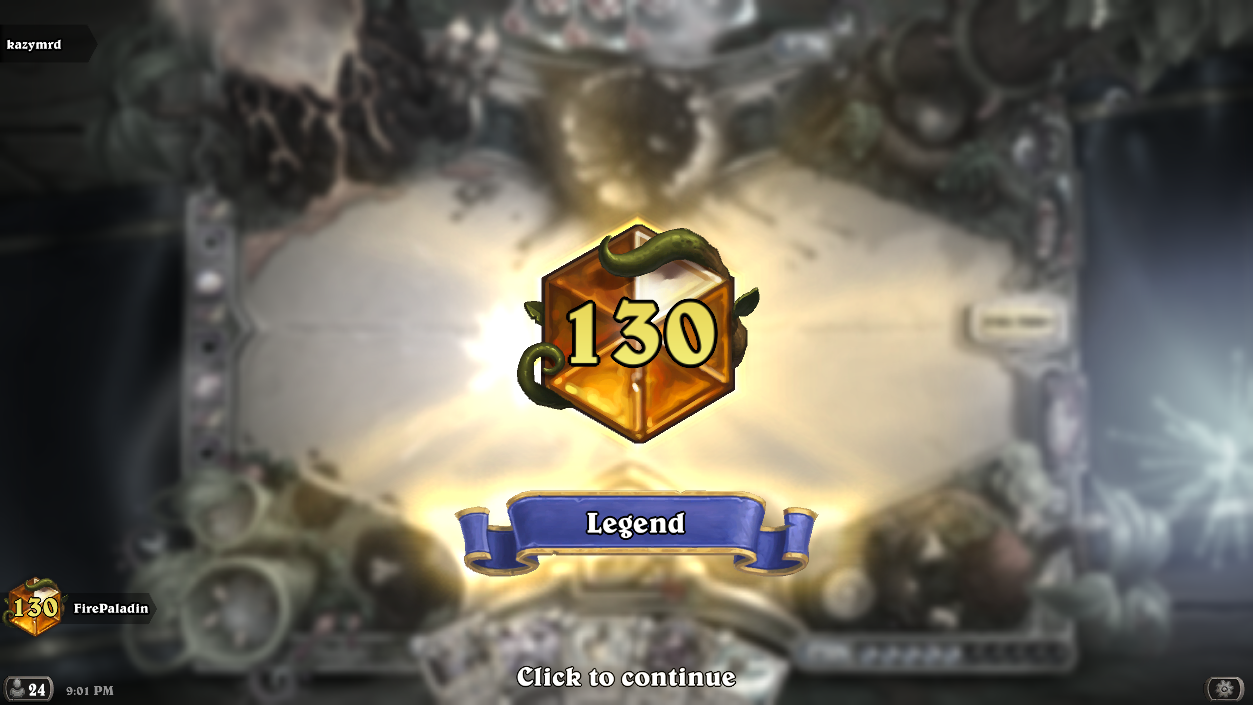 Image above shows the latest climb in May. The tweets linked below are other proofs that deck is not one hitter:

3rd April. Most of the ladder climb with QRP

Legend climb in May fully with Quest Reno Priest.

Combo:Quest+Deathrattles,Dirty Rat,Brann,Removal in order to kill what Dirty Rat pulled out

Worth noting that its probably never fully wrong to keep Raza and Anduin together in your mulligan stage. Quest is also almost never worth mulliganing away. Its too good.

The backround of the deck:

After Raza revert nerf most of the players including me started experimenting. Versions with Velen, Dragon package,no Velen. How many low cost spells were supposed to be in the deck etc. One of my try outs was also this deck. Quest Reno Priest. Which turns out offers a lot of flexibility and breathing room for player to decide his gameplan in almost any matchup possible. The core of the deck was taken from a Reno Priest who was able to hit Legend in SN1Plock meta. Few cards were cut to give a deck another win condition in form of Awaken the Makers Quest and voila: The results were good.

What pros this deck has compared to usual Combo Reno Priest?

Amara as a Quest reward is just a better Reno in every way. That ensures that its really hard to kill you compared to usual version. Archbishop Benedictus is a single card with such a powerful effect that it opens up the exhausting wincondition. Giving you an edge even in crazy matchups like Mill Rogue,DMH Warrior and other decks which you would usually loose to against. Dirty Rat as a tech card ensures that you are more favourable against faster combo performing decks like Mechathunlock or Aviana/Ysiel Druids. It is also a good tool to deny the Giants from Quest Mage or a powerfull tool in mirror matchup. Those card choices combined give you a more breathing room and winconditions troughout the matchup, unlike the usual Reno Priest which often just aims for Spawn OTK

The cards/packages which are important:

Quest/Deathrattle package: Works as main drawing engine,gives a Spawn fuel in form of cards like Gilded Gargoyle or Licensed Adventurer. Amara gives you a ton of survavibility. Just a few examples: Quest Mage now has to chew trough 8/8 Taunt and 40 health. Effectively making it 48 health in total to OTK. Any sort of Aggro deck needs to kill you even faster. Since Amara in that matchup is easily game winning. In a mirror,your Reno Priest opponent needs to gather both more Spawn fuel and ensure that he will otk you while not dying himself because of Spawn effect.

Combo package: Raza,Shadowreaper and Spawn. All you need to put your opponent under pressure of getting OTKed each turn

Priest powerfull spells: Shadow Visions,Mass Hysteria,Psychic Scream,Twilights Call,Spirit Lash all rpove once again that they are powerfull spells which are really really annoying to deal with.

Techs which are giving you way more flexibility: Archbishop Benedictus ensures that you have secondary wincondition in form of Control. Dirty Rat gives you a grip against the winconditions of your opponent and Mass Dispell makes Warlocks,Even Shamans and Mech decks roll their eyes because how annoying that tech is

Mirage Caller+Midflayer Kaahrj: They deserve their own spot. Mirage can be paired with any non battlecry effect and performs really really well. Either it be drawing deathrattle or Northshire Cleric or even effect like Thaurissan. Mindflayer is probably the best 3 drop in the game. It has deathratttle so it contributes to quest, It helps you establish board presence and it has synergy with Mirage Caller. There were numerous times where I played Mindlfayer for Mirage Calling it straight away for either 2 or 4 Quest ticks(4 Quest ticks because Midnflayer copiped the Deathratle card). Overall those cards are really really strong.