Hey everyone! I'm Funki Monki, an off meta deck builder. A few weeks ago I posted a guide  on a new non-pure Broom Paladin list I created that got me from Diamond 5 - Legend and after playing it and refining it some more I was able to climb to 1368 Legend last season with this new and improved list! The last 2 days of the season I managed to climb from 16k Legend - 1368 with a 91% WR going 43-4 and am confident this list is pretty refined so I wanted to explain the list and refinement more in-depth. Some of you may have even seen this deck on ladder already or heard it mentioned in the latest VS data reaper podcast. Lets dive in! 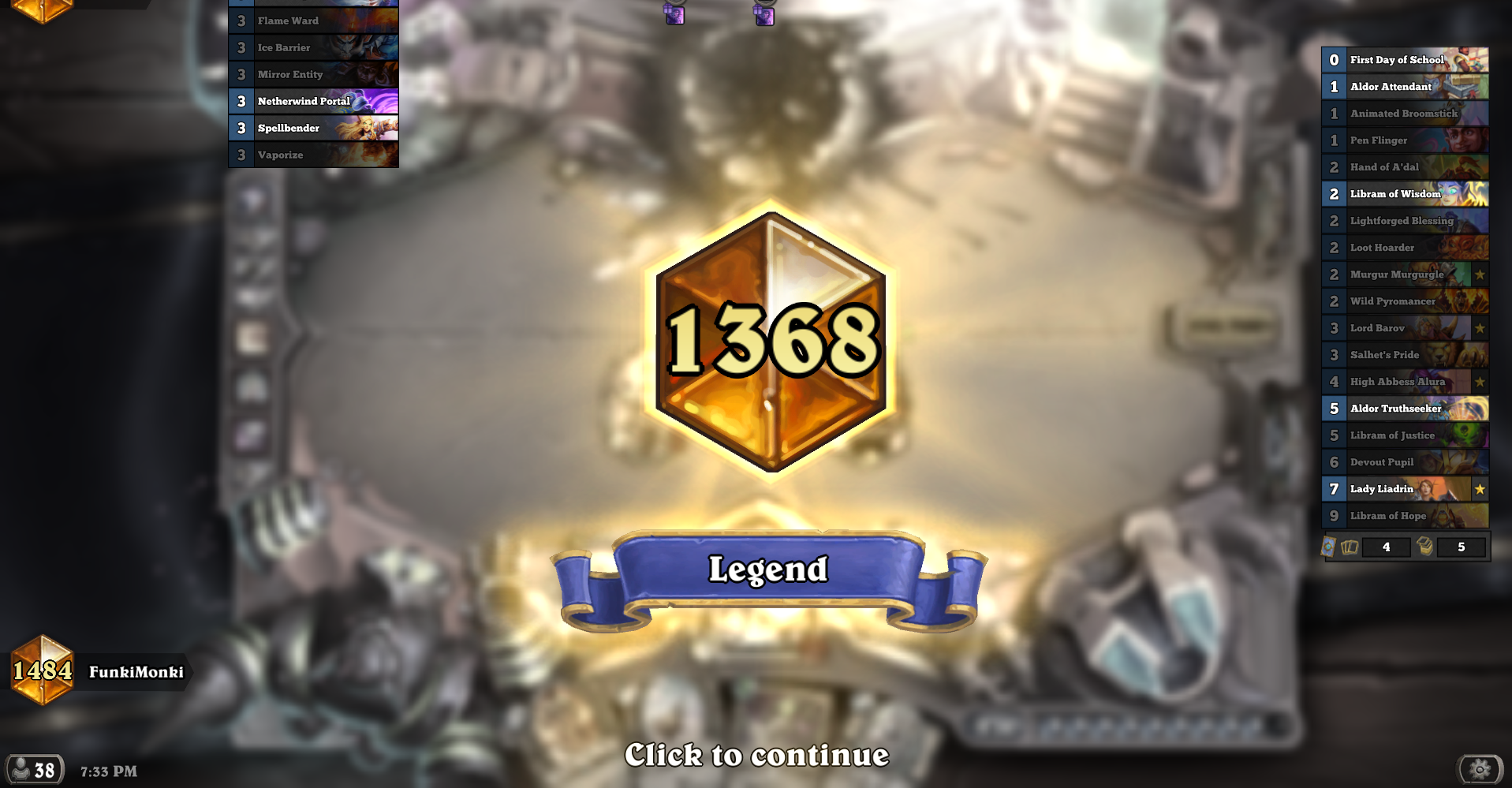 This deck doesn't look it at first, but plays very differently than a traditional Pure Paladin. While Pure Paladin mostly plays on curve and is straightforward, this deck can play much better from behind, is more grindy and more flexible in most situations. One of the main reasons people play Pure Paladin in the first place is for Lightforged Zealot to regain board control. Paladin lacks rush minions and removal so is typically difficult to play from behind but with the new Animated Broomstick we can control the board whenever we want. We even have a way of tutoring the Broomstick with Salhet's Pride! One of Paladin's weakness is also card draw and this deck aims to fix that with a heavy draw package. Not only do we run the Hand of A'dal but we run Salhet's Pride which can also tutor our [Hearthstone Card (Loot Hoarders) Not Found] for further cycling. This ensures that we can draw into our board clears and win condtions faster and more consistently. This deck also has insane late game value with Lady Liadrin, Libram of Wisdoms and Pen Flinger.

Compared to the previous version, I made a few changes that helped the deck out quite a bit:

Buff package (Braggart/Kings/Authority) - cut because the package is countered too easily and also the Braggarts get in the way of drawing more important minions with Salhet's Pride.

Wild Pyromancer - added 1 more, to help vs Rogues/Hunters and to have more consistent board clears. Combined with Lightforged Blessing wins games vs aggro.

Lightforged Blessing - added 1 to help vs Aggro and DH decks

Goody Two-Shields - cut because it is less powerful without the total buff package, and didn't really contribute towards our win condition and not as strong when behind on board (which we sometimes are in this list)

Consecration - cut, dealing 1 damage to opponents minions after a Barov or Justice is very easy in this deck so we don't need this card to combo for a board clear. Broomstick (especially with a discounted Libram of Wisdom) is also a better board clear for cheaper.

Vectus - cut, originally used for more card draw and more Murgur Primes but we already have so much value/card draw and he was pretty slow tempo unless used with a Broomstick.

Pen Flinger - added 1 because the late game value is nuts and ensures you're never floating mana. Try to always maximize value from this guy so you can save your board clears for when you REALLY need them.

Devout Pupil - added 2 because you can create some insane swing turns. Its great against aggro to shut them down and great to use with Broomstick to trade since it has divine shield.

Alura - added, but admittedly probably one of the weakest cards in the list. She doesn't provide many huge swing turns but whatever she casts a spell from deck it does thin the card so you're more likely to draw into your powerful stuff and she has great stats. Sometimes she does highroll a Libram of Hope.

I also tested and chose not to include these card choices:

Cult Master - Too dependent on having a board or your Broomstick. Strong in some matchups but a dead card in others so it's less consistent overall. In order for this card to be good, a lot of times you have to waste a Broomstick which is one of your most versatile cards in the deck better saved for a bigger swing turn.

Demon Hunter (11-0) - EZ PZ Lemon Squeezy. Vs Soul DH you can win with your eyes closed because they have limited damage in the deck which can't stack up to all the healing and taunts we have. If you can go 4+ minions wide it's preferable to play around Blade Dance. Aggro DH is a bit harder but still pretty easy so we always want to mulligan vs aggro. Mitigate as much damage as possible with an early curve, making awkward trades and using broom early until we can cycle into a taunt and/or healing is oftentimes enough to seal the deal.

Druid (4-0) - Druid can build very big boards so will need at least 1 Libram of Justice throughout this matchup. Get as greedy as you can with your board clears and try to clear the first or second Guardian Animals as efficiently as possible without burning a Justice or Barov because there will be at least a couple more big boards following up.

Hunter (8-0) - We will definitely need some healing in this matchup. Try not to fall too far behind on board, minimizing as much damage as possible even wasting some value like a Pen Flinger or making awkward trades. As long as we can survive to our Aldor Truthseekers/Pupils and Blessing/Hopes we'll be fine. It is usually best not to sit on Broomstick for very long either.

Mage (3-1) - The hardest matchup for sure. Because this deck is so buff and board focused, freezes and devolving missiles make it much harder to damage our opponent. Because of this, be careful to load up your buffs too much onto 1 minion, especially a deathrattle minion in case it can't attack or gets devolved.

Paladin (4-0) - Always try to deny them a minion to buff and we're good in this matchup.

Priest (4-1) - Second hardest matchup for us. Maximize value where you can and we can usually outgrind them unless they get some stupid RNG. Always keep in mind thief mechanics, so don't load up all your buffs on 1 minion, usually 1 here and there is good. Try not waste your Libram of Wisdoms on a minion at the end of a turn or unless you're attacking with it to play around silence/steal.

Rogue (4-1) - An early curve is very important to trade into their stealth minions after they attack. We will need some healing in this matchup at some point so prioritizing early draw is key to cycle into our taunts and healing to stabilize. Wild Pyromancer is great for this matchup.

Warlock (3-0) - All painlock. Get in as much early chip damage as you can, because they'll just end up killing themselves. By the time they stabilize with their Vulture and Flesh Giants we should be able to clear with Barov/Libram of Justice and then they're almost dead at that point. Will see even less painlock after nerfs and will be even more favored now.

Warrior (2-1) - Most Warriors are primarily Bomb Warrior. We definitely want to be the aggressor in this matchup because we will die to bombs eventually. Always try to stagger your buffs and minions against a bladestorm so you want a 1 health minion, 2 health, 3 health, etc. A good idea to do as well is try and bait out the first Brawl by going wide with your cheaper minions before you drop your big Hopes/Truthseekers/Pupils.

Sometimes Keep - Lightforged Blessing (vs DH, Rogue, Hunter), Wild Pyromancer (vs DH, Rogue, Hunter if you have another cheap spell), Aldor Truthseeker (on coin against slower decks or if you have a Libram of Hope in hand against faster decks on coin and a couple other early minions for the early game), Libram of Hope (against aggro decks, on coin, with truthseeker and a couple other cheap minions in hand), Libram of Justice (vs Druid)

I hope you like this deck and, as always, if you have any questions or have a suggestion please comment below (I try to respond to all comments)!