The new miniset brings us Edwin, Defias Kingpin. This deck goes all-in on him, trying to get him to 30/30 stats or higher and give him stealth with Conceal to lead to a win the following turn. Incredibly, if you draw well, you can actually have a larger than 30/30 Edwin on turn 1. This is a very highrolly deck, and it only has one win condition, but there is something very enjoyable about seeing a huge 40/40 Edwin on turn 4 or 5, and you can get this sort of result quite often. If you like decks with high impact miracle turns, where you have to draw and play a lot of cards quickly for an awesome effect, this deck's playstyle might be for you.

This deck has one strategy, called Edwin, Defias Kingpin.

Edwin - The only strategy you are going to go for with this deck is setting off a miracle turn with Edwin where you draw a ton of cards, maybe even your entire deck, to give him 30/30 or more in stats and Stealth (if it's a bit less you can still win using spells and small minions, or by attacking 2 turns in a row if your opponent doesn't have removal). Early game, you're just going to draw and use your opening hand's removal and minions to try to stall for a few turns until you can get your Edwin going to set up lethal.

This deck can win against any deck if it highrolls, and lose to any deck if it lowrolls. It's very mulligan and draw dependent, but it's fun to see it go off and give you a win.

Keep Edwin, Defias Kingpin unless you have a Captain's Parrot.

Keep a Shadowstep if you have Edwin, Defias Kingpin or a Captain's Parrot.

If you do have a Captain's Parrot or Edwin, Defias Kingpin in hand, keep any 1 cost cards and mulligan away your 0 cost cards to try and get the 1 and 2 cost cards out of your deck and into your hand. This is going to increase the chance that your Edwin miracle turn will be successful. The exception is don't keep both copies of Kindling Elemental since the second one played will cost 0.

Before you play Edwin, Defias Kingpin you want to try to clear the deck of "high" cost cards - meaning everything costing more than 0. You want the overall cost of your deck to be as low as possible so you can draw it all or most of it during your miracle turn. To do this the mulligan is important as is using Secret Passage.

One thing you can do to minimize the overall deck cost, which is crucial for making your Edwin miracle turns more consistent, is using Secret Passage to play 1 cost cards and Captain's Parrots from your deck. You don't actually want to play 0 cost cards, it's better to keep them in the deck to have a higher chance of getting 0 cost cards during your Edwin turn. The exception is if you need tempo on board to survive.

The first Kindling Elemental you play will make the second one be a 0 cost card.

Captain's Parrots are guaranteed to draw Edwin, Defias Kingpin and so are key to the consistency of this deck.

If you have Shadowstep, you can play Edwin, Shadowstep him, then play the card Edwin drew. His battlecry will keep going and you can keep drawing and playing cards, and Edwin will handbuff himself while in your hand. Then next turn, you can play him for just 2 mana and do your actual miracle turn. Doing this setup makes it a lot easier to be able to draw through the entire deck early on and buff him to 30/30 or higher.

To prevent your 0 cost minions from filling up the board and running out of board space, you can use your own removal spells or Shadowstep on them.

Make sure to play any Counterfeit Coins and Preparations in hand first if you are forced to play a Secret Passage during an Edwin turn.

The miracle turn can take time, so start playing as soon as your turn starts and play quickly.

Keep in mind what cards you have left in your deck, usually you don't want to start the miracle turn if you don't see any immediate threats on the board. If you have Shadowstepped Edwin or have coins and Preparations in hand, or have drawn lots of 1 cost cards or Captain's Parrots, then it's going to be more likely for Edwin to be very large if you start your miracle turn even if you are at low mana like 4 or 5. If you still have both Captain's Parrots in the deck, that's an overall 4 mana so don't start your miracle turn in that case unless you feel you have to go for it or risk losing in the next 2 turns. 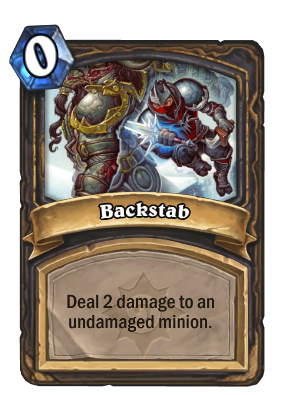 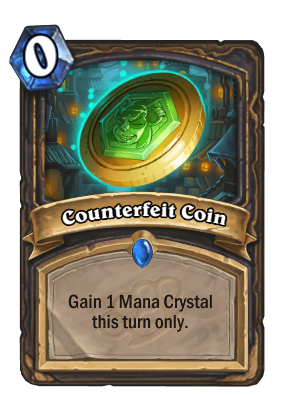 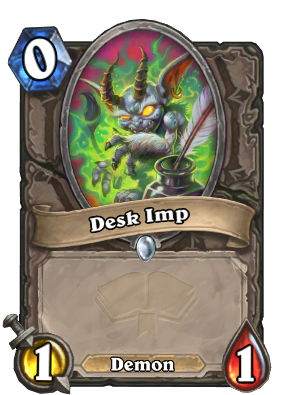 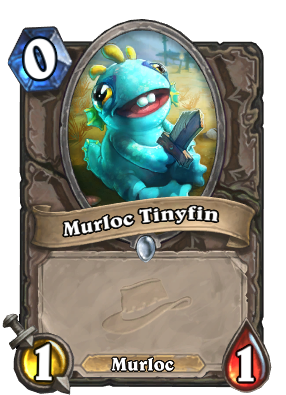 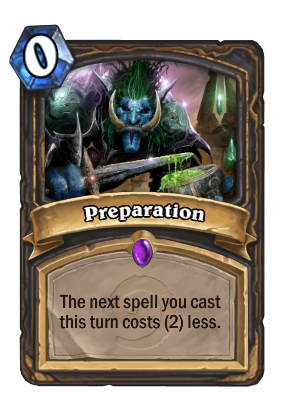 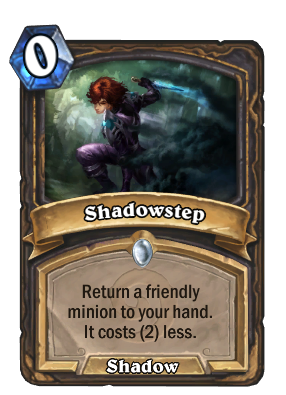 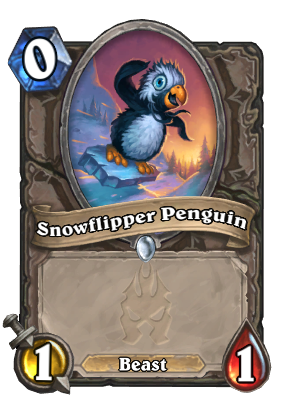 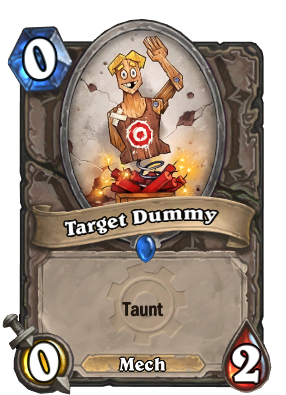 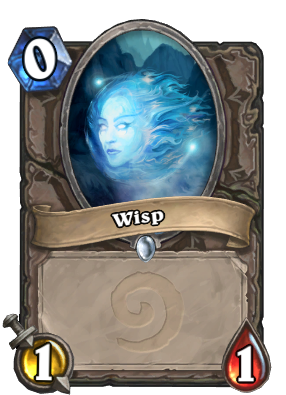 You want 0 cost cards to keep the overall deck cost as low as possible to be able to draw more of the deck more consistently on your Edwin turns. Some key cards from here are Counterfeit Coin and Preparation to be able to keep the miracle turn going even if you draw some 1 cost cards, and Shadowstep which can be used on Edwin, Defias Kingpin to set up a better Edwin turn after. 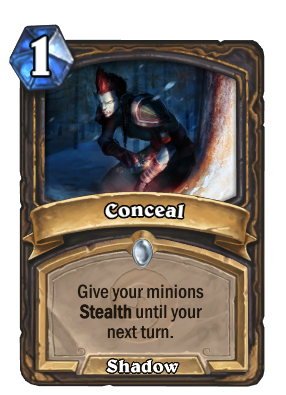 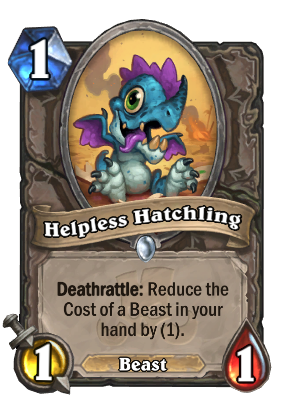 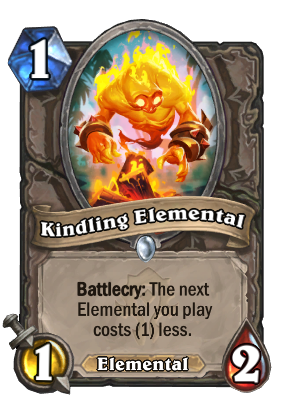 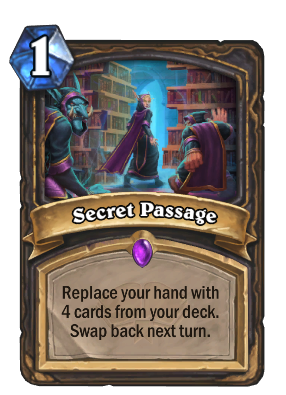 There aren't enough 0 cost cards in the game to be able to fill the rest of the deck with them, so we have to play some 1 cost cards. When possible, some of them have cost reduction effects. A card we actually really want to run despite it costing 1 is Conceal, it's important to give your Edwin stealth on your miracle turn so he doesn't just get removed. 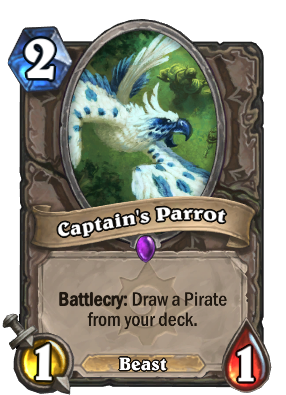 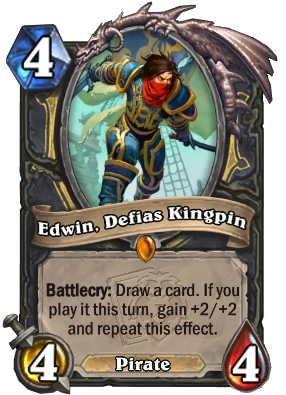 Captain's Parrots draw Edwin, Defias Kingpin, and he is your win condition. These are the only "high" cost cards in the deck, parrots being 2 mana can clog up your Edwin turns but they are just too good at tutoring out your win condition to leave out.

This deck has a pretty unique playstyle, if you have Edwin, Defias Kingpin and like highrolls and miracle turns give it a try! It has the potential for some insane turns and memorable games. If you have a question or comment, or are wondering about a card substitution, post below.