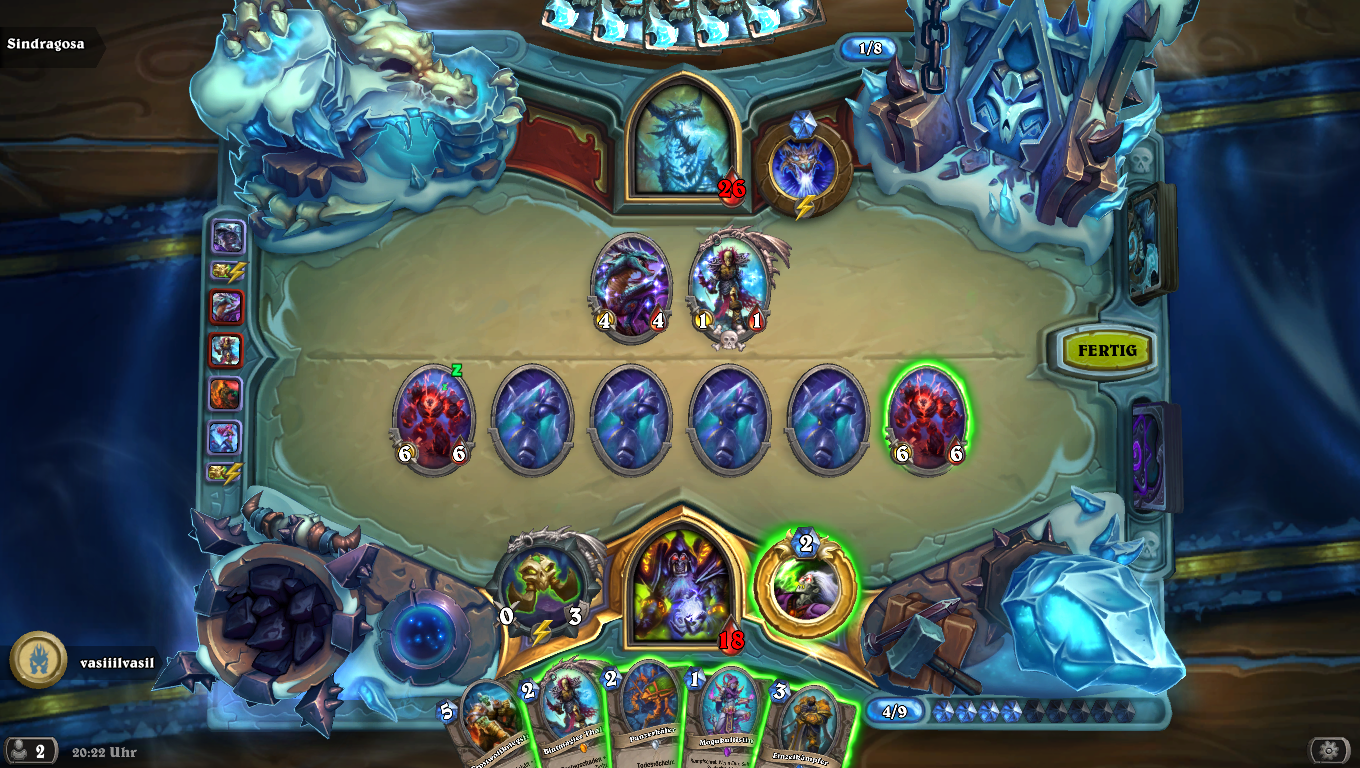 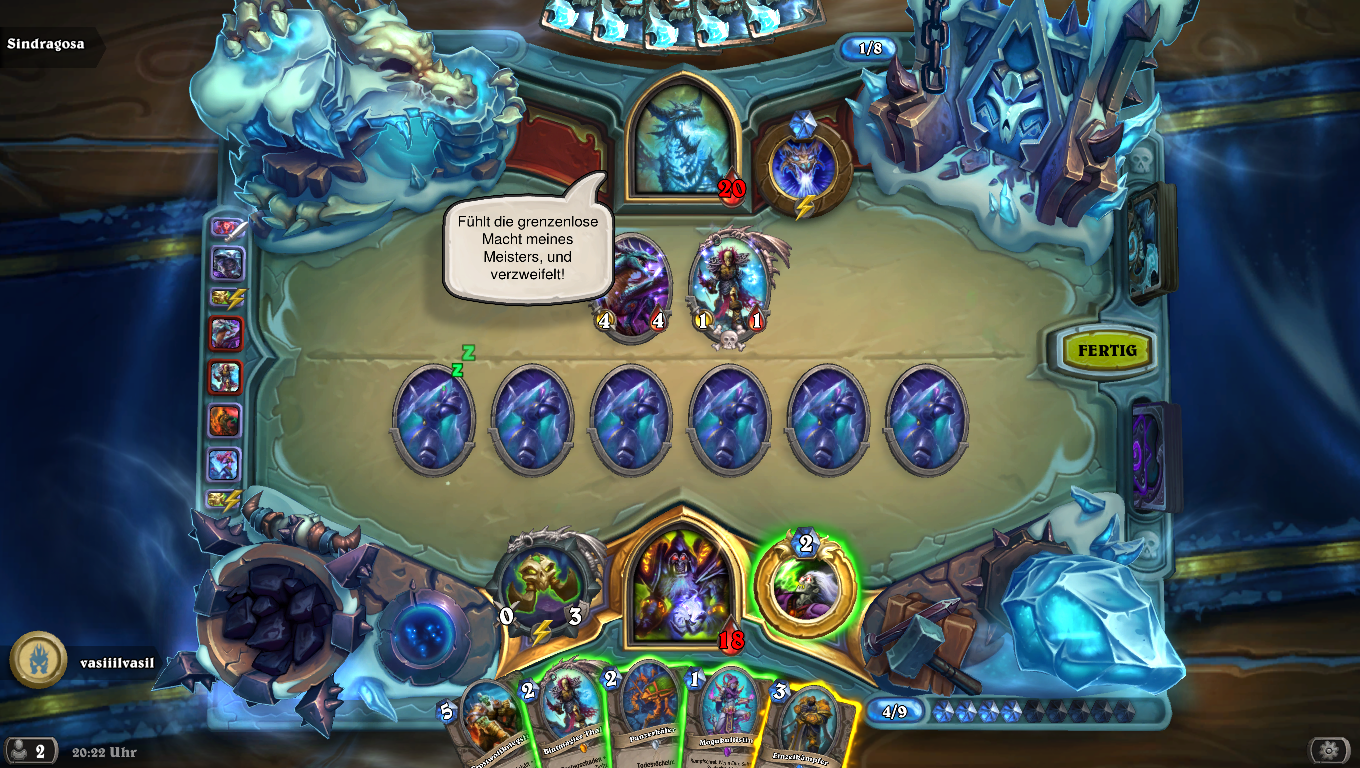 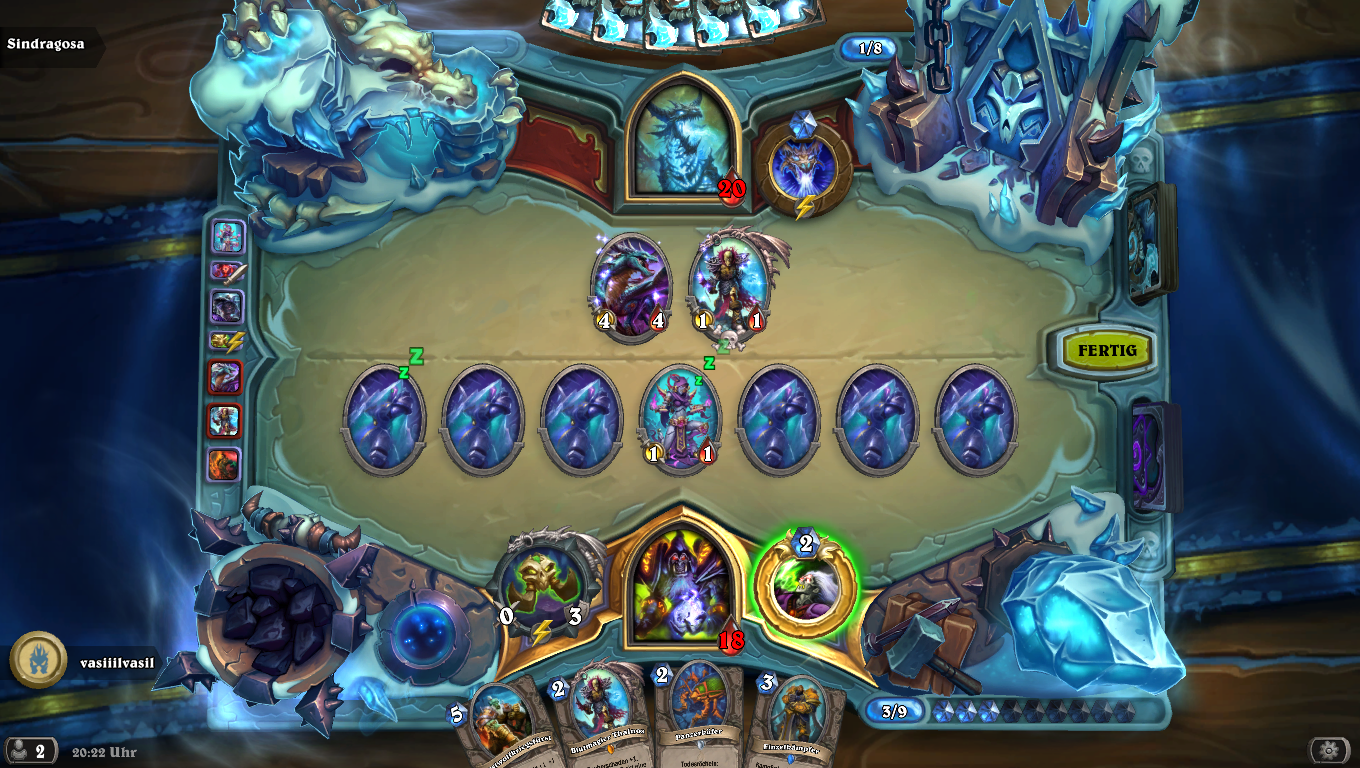 As you can see above, a single Mogu Cultist doesn't summon Highkeeper Ra. So it was coded to check whether there are 6 other cultists after all. There isn't any free interpretation of the card description. Permanents might be skipped in Reliquary Seeker's case, but apparently not here.

Pity, I was looking forward to playing the deck. It wasn't going to cause any issues in the game, since the set-up would have been very slow and faster decks would have overwhelmed it with ease.

For people, who are confused about what's going on: I speculated, that Mogu Cultist could have created a hidden OTK combo, which involved summoning Highkeeper Ra, when you had 5 Lucentbarks on the board, and copying the 20/20 with a Faceless Manipulator.

When Mogu Cultist was revealed for the first time, I speculated that it could have enabled some hidden synergies with dormant creatures. Now, I am not going to deny the fact, that making a board full of dormant creatures (The Darkness, Sherazin, Corpse Flower) wouldn't have been easier than just going for Highkeeper Ra the old fashioned way, which is already a meme strategy. But the difference in druid's case is that you could have tried to do your normal gameplan - to build up some taunts and multiply Lucentbark a bunch of times. Eventually, when you had 5 copies of him on the board and all of them went dormant, you would have cheated Mogu Cultist's requirement and summoned Ra with only two minions. I speculated this would have been the case, because up until yesterday Reliquary Seeker (a card with a similar text) was the only evidence for this interaction. She gets a buff, when there are a couple of dormant minions on the board. Since permanents don't really count as minions per se, I thought that dormant creatures would have been skipped in Mogu Cultist's case. I was wrong, the card works as someone would expect it to.

But before I finish this deck guide, I would like to give you an example of how beating an opponent with this deck would have felt like:

Malfurion: *groans* Con…gratulations… Garrosh. I… must admit… that you… put… a very nice fight. *coughs* But your dragons were no match against my wall. You fought with anger in your heart and that's why you lost. A true warrior is not a person, who aggressively forces his creatures to attack and who observes them as plain servants. Instead, he looks upon them as brothers in arms and keeps his faith even in the darkest of times. But I guess you are too unpatient to understand this, so there is nothing more to say than well pla…

Garrosh: HAHAHAHA. Foolish druid. Do you think you have defeated me that easily? I will make you pay for your insolence. I activate MY LEGENDARY SPELL!

Malfurion: *grasps* Legendary spell? Could this be?

Out of nowhere a massive airship, probably a kilometre long, flies above the field. It slows down, its big metal doors start to crack open and an unbearably loud screech pierces the air. Smoke and flames emerge from its rear entrance. "Could it be just the engine?", you ask yourself. Then suddenly three huge creatures break free from their metal chamber, with lightning speed they swoop down on your minions and block out the sky.

Malfurion: No! NOOOOO! This can not… bee!

Garrosh: *laughs* Pretty impressive, aren't they? While you were planting your pathetic little trees, I gathered an army with a single roar and just waited to draw my magic card. Now look how your pathetic wall crumbles from the might of my dragons. Red-Eyes, attack!

Garrosh: Your healing spells are depleted, you can't revive your trees anymore. Tell me, dudu, how's your faith now? On my next turn all three Red-Eyes are free to attack. This game is over no matter what card you play. I WILL CRUSH YOU!

Malfurion: It's true, Garrosh, my healing spells are indeed finished and I can no longer revive my Lucentbarks. But don't write me off just yet, as I have another trick up my sleeve.

Malfurion: With pleasure. My turn! I summon MOGU CULTIST!

Garrosh: Mogu Cultist? *reads card* Did my dragons accidentally fry your brain as well? What are you trying to do? You don't have 6 other cultists on the board to summon Ra.

Malfurion: Read again, Garrosh. The card states that the board only has to be full of them.

Garrosh: So? You have a bunch of dormant Lucentbarks.

Malfurion: True, but what's one minion's weakness is another minion's strength.

Malfurion: Dormant creatures don't count as living entities on the board and only narrow the available spaces. And since I control 6 of those, you understand what that means.

Your world is beyond redemption.

Garrosh: Highkeeper Ra?! Ahh, it's not possible! No one's ever been able to call him.

And now the harsh truth: