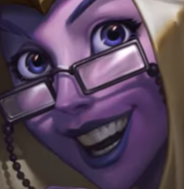 (WARNING: Won't work on most other match-ups. Use only in case of Big Priest Epidemics.)

So you just got to a rank floor and you feel like chilling out? Did your MMR in Casual go up to the point where you are consistently facing Big Priest? Or maybe your actual climbing is being burdened by several Big Priests and you feel like biting back. Regardless of your reasons, this deck has been refined to deal with the big nuisances, and you might enjoy knowing of its existence.

Personally, I use this whenever I reach a rank floor to hunt for Big Priests whenever I feel self-righteous, but insta-conceding until you find a priest might not be your cup of tea (but if it is, I commend you on our mutual hatred for the archetype).

It's quite simple, really. Your cards summon minions for your opponent or transform them. From turn 1 onwards, you are able to start filling your enemy's board and (since he's a BP) he will watch helplessly as his res pool is turned to crap.

This isn't all, however. Once your enemy starts using Mass Resurrection and other similar effects, your Frost Lich Jaina will turn the small minions into Water Elementals.

Polymorph: Boars and Roaring Torches that you haven't used on minions can be used for extra damage if your enemy hasn't become an hero during the game.

Remember to play Counterspell just as he is reaching 6 mana so his Shadow Essence fizzles and fails. This is considerably harder if your opponent hasn't used the coin yet, so think before acting. Any time after your opponent gets to 7 mana is probably a good time to play Potion of Polymorph, because they have no cheap minions to disarm your secret apart from Barnes (and now not all BP decks run him).

Feel free to use Conjurer's Calling on enemy sheep and similar low cost minions if you feel like your enemy's resurrection pool is not crappily diverse enough.

When your opponent drops a sole big minion like Ragnaros the Firelord, hit him up with your Sylvanas Windrunner and cast Conjurer's Calling on her.

Things to Watch Out For:

Be sure to keep an eye on your removal. ALWAYS get rid of Ragnaros, Catrina and Y'Shaarj, as they can easily get out of control if left unchecked. If you have only 1 Polymorph left and the enemy board only has an Obsidian Statue, leave it alone unless you've already dealt with the previous three threats.

Turn 4 Barnes can still ruin your day, especially if your starting hand is teh suxx0r. My only advice is to keep a handy transform effect in your starting hand. Even a 4/2 charger is better than whatever the 1/1 Barnes brings. Don't forget that.

Don't worry too much about Archmage Vargoth. If that's all he has in his resurrection pool, he won't go too far by bringing back sheep, chickens and boars, especially once your DK is out.

Late game Counterspell is especially powerful, more even if your enemy thinks you only have Potions of Polymorph in your deck. You might block a Zerek's Cloning Gallery!

Your Weasel Tunneler can be used against you to disarm your Potion of Polymorph. Pay attention when you are both close to fatigue.

Do not worry about Psychic Scream. You will appreciate all the distance you can get from the end of your deck. If you are building a big board, however, be sure to kill your opponent's small minions before he screams. Wouldn't want those little buggers to get out of their resurrection pool, now would we?

Y'Shaarj can be a useful tool for getting your opponent closer to fatigue (with enough Water Eles to stall it), but a dangerous one to leave alive nonetheless. If you consider letting it live, make sure you remember he will almost always call a friend the next turn.

As with most HS games, RNG will play its part. If your enemy gets a lucky resurrection or too in the middle of a pool of 1-drops more than once, you might lose, and that will be terrible. This is my way of saying that, even though this deck has been refined to deal with Big Priest, this does not in any way guarantee that luck will be on your side. Sadly.

After all that is done, when you see your enemy cast Eternal Servitude and pale and hesitate before the three shitty choices you've given him, you will know it was worth it. Hell, even the games you lose will probably piss them off (I know mine have), so why not just get out there and hunt some Big Priests? Do your good deed for the day: make a BP miserable. Call now!

By the end, the enemy board should look something like this: